The launch of riverboats in Iowa started a wave that swept through the South and the Midwest and brought gaming to the heart of America. 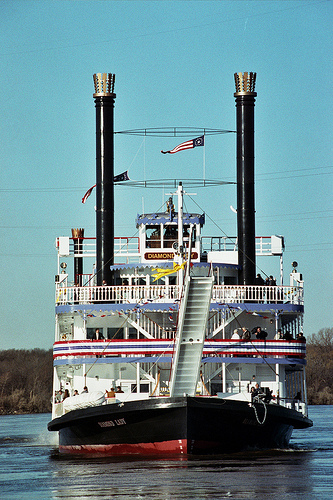 Twenty years ago on April 1, the real expansion of gaming in America began. Some trace it back to the debut of gaming in Atlantic City in 1978, but it was more than a dozen years before another state got on the gaming bandwagon. But on April 1, 1991, the Diamond Lady, built by scrap metal magnate Bernie Goldstein, set sail from Bettendorf, Iowa, on the first legal riverboat gaming cruise since the 19th century. On the same day, the Casino Belle left its dock in Dubuque’s Ice Harbor, packed with community leaders, supporters and tourists.

The boats were rather small in comparison to some of the “riverboat” gaming properties today—riverboat is a misnomer since there are no longer any boats that actually sail—but it was immediately popular, and encouraged the growth of the riverboat industry in Iowa and later across the Midwest.

In a statement issued by the American Gaming Association, President and CEO Frank J. Fahrenkopf on April 1 said that event changed gaming forever.

“Not only is today the 20th anniversary of modern riverboat casinos in America, but it also marks a major step in gaming becoming one the nation’s favorite leisure pastimes,” he said. “Further, the advent of riverboat casinos sparked the growth of an industry that has meant hundreds of thousands of American jobs and tens of billions of dollars in much-needed tax revenues.”

But it was the impact beyond Iowa that marks the sailing of the Diamond Lady so strongly, says Fahrenkopf.

Isle of Capri, the company that traces its roots to Goldstein’s first casino, employs an executive who has traveled the full circle of riverboats over the last 20 years. Bill Gustafson embarked on that first cruise as a security supervisor. Four gaming properties and three states later, he is back where it all began in Bettendorf as the senior director of operations at Isle Casino Hotel.

“When the Diamond Lady left the dock in Bettendorf 20 years ago, I thought I had a good job,” Gustafson recalled. “Instead, I found a rewarding career in an industry that has made a major economic contribution in the United States.”

Wes Ehrecke, president of the Iowa Gaming Association, says gaming has undoubtedly succeeded in the state.

“I think the future is bright for the gaming industry,” Ehrecke told the Des Moines Register. “If the economy turns, and I am optimistic that it will, we want to be positioned to have great entertainment attractions for people so they have choices to make.”

Todd Moyer, the general manager of the Diamond Jo Casino—which succeeded the Casino Belle—notes the difference between the old and the new boats. Peninsula Gaming now owns the Diamond Jo.

“Diamond Jo was built to attract visitors,” says Moyer. “When we moved off of the riverboat, we had the luxury of room to spread out, and to offer more amenities. Our team goal is to offer unforgettable experiences to our customers, every time.”