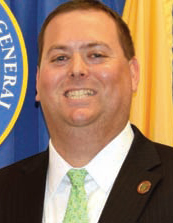 Jordan Hollander considered a career in foreign affairs before choosing Rutgers Law School on his way to a post as deputy attorney general for the New Jersey Division of Gaming Enforcement. He received a master’s in comparative European politics from Trinity College, Dublin, and worked on political campaigns at Lycoming College in Williamsport, Pennsylvania. He even thought about a doctorate in comparative politics.

His decision to enter casino law comes as no surprise.

“I have always had an interest in both gaming and public service, so the DGE was a natural place to pursue both,” he says. “During law school, I completed an externship with the DGE, working on employee and casino licensing matters as well as regulatory prosecution cases, giving me a unique insight into the agency.”

He also had an interest in law enforcement.

During law school, Hollander, who grew up in Branchburg, New Jersey, interned with the Warren County Prosecutor’s Office, which turned into a paid, part-time position. “My clerkship following law school was with the presiding criminal judge in Monmouth County, New Jersey,” he says. “Both of those experiences have been beneficial in my current role with the DGE, which is a specialized law enforcement agency, and I remain very interested in criminal law.”

Following his clerkship, Hollander, 30, joined the inaugural group of students in the master’s program in gaming law and regulation at the University of Nevada, Las Vegas.

Like many a professional, Hollander has had his share of mentors that helped shape his career, including his parents and brothers, Jeremy and Justin. The brothers and Hollander’s mother, Susan, are all attorneys.

“They, along with my dad, Richard, encouraged me in my academic pursuits, to study abroad, and to pursue a career in gaming,” he says.

He also cites gaming law professors, Stephen Schrier at Rutgers and Jennifer Roberts, Tony Cabot and Greg Gemignani at UNLV, along with Joe Asher, who told Hollander about the UNLV program. Colleagues at the DGE, including Director David Rebuck, Deputy Director Mary Jo Flaherty, Deputy Attorney General Tracy Richardson and former Deputy Director George Rover, encouraged him to pursue gaming law, to take on more responsibility and to become a leader in this area.

“Outside of gaming law, Warren County Assistant Prosecutor Kelly Shelton and Judge Francis J. Vernoia provided me with indispensable advice, experience and mentorship that continue to this day,” says Hollander, who visits the Jersey Shore a lot.

Sports wagering has made the biggest impact in his time with the DGE. “The process itself has not really changed, but it brought new populations of individuals and gaming operators from outside the Atlantic City area directly into the industry,” says Hollander, an avid golfer and New Jersey Devils season ticket holder. “New Jersey has been a global leader in online gaming, and I expect to see that same innovation and success with sports wagering, with other jurisdictions turning to Atlantic City and the DGE for guidance and expertise.”

Add the opening of two new casino resorts, and Atlantic City faces a wave of excitement in the future. “I hope to be on the forefront of the casino industry as it continues to innovate and grow.”

Growth brings new blood to the industry and its regulators. For those interested in the legal side, Hollander urges people to network with industry veterans. Attend a Casino Control Commission meeting in Atlantic City or a Nevada Gaming Control Board meeting in Las Vegas. Join your local gaming law bar association.

“I am fortunate to be serving as the chair of the New Jersey State Bar Association Casino Law Section this year, and we hold a few networking and continuing legal education events each year that are great opportunities to meet practitioners and stakeholders,” he says. In addition, write an article or blog post for a law journal.

“Get your name out there. It can go a long way.”