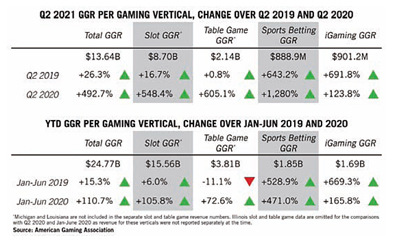 U.S. commercial gaming revenue reached $13.6 billion in the second quarter of 2021, marking a new industry record, according to the American Gaming Association’s (AGA) Commercial Gaming Revenue Tracker. The total bested by a large margin the previous record—$11.1 billion set in Q3 2019 and matched in Q1 2021—by more than 22 percent. With nearly $24.8 billion generated to date, 2021 is close to surpassing 2020 full-year revenue ($30 billion) and on track to overtake 2019 ($43.6 billion) as the highest-grossing year ever for commercial gaming revenue. The second quarter of 2020 sunk to the lowest commercial GGR in history, and one year later it reaches the highest totals ever.

Also of interest, gaming revenue still has room to grow considering that most U.S. casinos were still subjected to state reopening guidelines at the start of the quarter that significantly limited casino capacity, offerings and amenities. When the second quarter began, 15 of 25 states—home to three-quarters (345 of 463) of U.S. commercial casinos—restricted capacity to 50 percent or lower, but all had fully reopened by the close of the quarter.

“These first-half results are truly remarkable. It is even more impressive when you consider commercial gaming revenue was at its lowest point ever just a year ago,” said AGA President and CEO Bill Miller. “This is a testament to our resilience and commitment to providing customers safe environments and world-class entertainment experiences.” 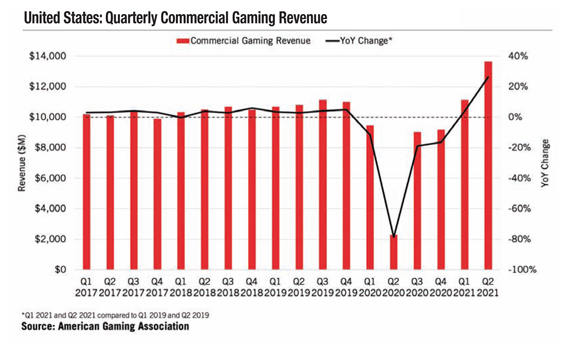