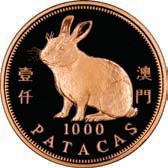 Gaming revenue in Macau broke the US billion mark in October, setting a new monthly record for the booming Chinese casino enclave.

Official results supplied by the Gaming Inspection and Coordination Bureau show the take from tables and slots hit 36.5 billion patacas (US$4.57 billion), an increase of 31.7 percent over an easy October 2012 comp (plus 3.2 percent), but it was the strongest year-on-year growth rate to date for 2013 and shattered the previous all-time monthly revenue record of 31.3 billion ($3.9 billion) set in March of this year.

Macau is already approaching last year’s total of $38 billion in gross gaming revenue with two months to go, and is up 18.4 percent over the first 10 months of 2012.

“We are currently forecasting approximately MOP31 billion to MOP32 billion in GGR during November and December, driven by across-the-board strength in all relevant gaming segments,” said Union Gaming Research Macau in a note to investors.

The firm noted that historical trends show average GGR in November and December generally coming in higher by 6 percent or more than the January-October GGR run rate. If that holds true, the total for 2013 should hit MOP360 billion ($45 billion), representing year-on-year growth of approximately 18 percent.

“This suggests Macau GGR in 2013 will be seven times the likely Las Vegas Strip GGR of US$6.4 billion,” the firm said.