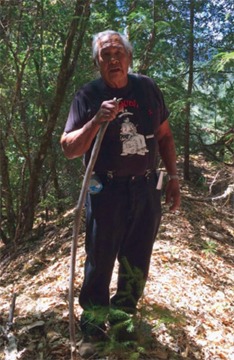 The sun was rising over the remote Trinity Valley in Northeast California one day in April 1852 when a posse of 70 men raided a band of Wintu Indians wrongly suspected of killing a farmer and stealing his cattle.

Many of the native men were away hunting and gathering, leaving the posse to slaughter 150 mostly women and children in what became known as the Bridge Gulch Massacre.

Descendants of the Nor Rel Muk Wintu who survived the carnage and a torturous era of Indian genocide surrounding the Gold Rush and European settlement still live in picturesque Trinity County. And relations with their non-Indian neighbors have markedly improved.

County officials and the Trinity Journal newspaper, founded in 1856, have assisted the Nor Rel Muk Wintu in documenting an application with the Department of Interior seeking federal recognition of their indigenous community.

“We want to keep our people together and preserve our identity,” tribal Chairwoman Marilyn Delgado says. “We have a lot of poverty. We have child welfare cases. We’d like to help our people get educated. We want to protect our aboriginal lands. That’s what this is all about.”

Unfortunately, the Nor Rel Muk Wintu and 356 other indigenous groups with recognition requests at Interior have learned seeking federal acknowledgment is an expensive and arduous process, fraught with bureaucratic red tape and likely to take decades to complete.

Delgado is, in fact, the third Nor Rel Muk chair to take up a continuous campaign for federal recognition that began in 1984.

“I’ve been working in federal recognition for 20 years,” tribal attorney Judith Shapiro says, “and I have never seen a petition where the people who started it lived to see the end of it.”

That may soon change.

Interior has proposed sweeping reforms to the Office of Federal Acknowledgement (OFA) intended to streamline the process. The deadline for comments on revised OFA regulations was September 30, and publication of new rules in the Federal Register is pending review of more than 350 responses.

Efforts by the Wintu and other indigenous communities to achieve federal recognition have faced increasing opposition from politicians and anti-Indian groups suspicious the tribes will build casinos.

“We don’t grant many requests,” says Washburn, an Oklahoma Chickasaw and former dean of the University of New Mexico law school. “Yet when we do acknowledge a tribe the first question anyone asks seems to be, ‘Does this mean that we are going to have gaming in our backyard?’”

The OFA has recognized 17 groups while rejecting 34 applications since the office was established in 1978. Tribes can also achieve recognition through Congress or the courts.

Few of the 356 initial inquires to OFA will see the light of day. Most Indian groups lack the money and legal expertise to pursue petitions, and the odds are long that they will be successful.

Tribes surviving the rigorous recognition effort who wish to get into the gambling business must go through an equally politically arduous, lengthy and expensive Interior process of getting land in trust for a casino.

“It’s not uncommon for it to take over a decade for a newly recognized tribe to develop a gaming opportunity, if it ever happens at all,” Washburn says.

Most Indian organizations, including the National Congress of American Indians (NCAI), applaud the proposed reforms. But Washburn’s attempts to fix what Indian law scholars call a “broken” acknowledgement system face opposition from tribes as well.

The Cherokee Indians in North Carolina and Oklahoma, some California tribes and other Indian nations contend the revisions will dilute acknowledgement standards and diminish tribal identity. About 45 Indian “splinter” groups are seeking recognition as Cherokees.

“There are tribes out there whose interest in this is a per-cap protection plan,” says attorney Bryan Newland, a citizen of the Bay Mills Indian Community who as Interior counsel worked on the reforms. “They don’t want any tribe to diminish their federal funding by one-tenth or their gaming market by one dollar.

“The notion these reforms are lowering the bar is garbage.”

There is also criticism from Connecticut, where officials fear three tribes whose efforts at federal recognition were recently rejected by Interior will resubmit petitions under the revised regulations. State officials believe the tribes want to open casinos.

Meanwhile, anti-gambling groups contend the revised regulations will result in an explosion of new Indian casinos, growing a $28 billion industry, which today consists of 237 tribes operating 449 casinos in 28 states, according to the National Indian Gaming Commission.

The debate over the proposed OFA rules and streamlining of procedures is most volatile in California, home to 110 federally recognized tribes, roughly a third of the 366 tribes in the lower 48 states. Sixty of the California tribes operate casinos generating $7 billion a year.

Eighty-one of the 356 letters of intent filed with Interior from Indian groups seeking recognition carry a California postmark. Twenty-seven of the letters date back more than 30 years, however, and only 13 groups have followed up on their initial inquiries.

Despite the low percentage of approvals, a report by a former BIA historian solicited by the anti-Indian group Stand Up For California predicts the revised regulations will result in the recognition of 34 tribes, 22 of which will likely seek casinos.

“By making the standards for federal acknowledgement more lenient, the proposed rules increase the likelihood of additional acknowledged tribes,” writes Michael Lawson of MLL Consulting. “Once acknowledged, these tribes will almost certainly seek their own casinos.”

Another former OFA anthropologist hired by a group of suburban Los Angeles card clubs warns the revised regulations could allow an urban Indian group seeking to launch a Los Angeles-area casino to resubmit a recently rejected application for recognition.

“They are a complete abandonment of any reasonable standard for showing continuous tribal existence and thus eligibility for acknowledgment,” George Roth says of the Washburn revisions.

The Tribal Alliance of Sovereign Indian Nations, a coalition of 10 Southern California casinos tribes, in a July 8 letter to Washburn said it had “serious concerns with changes… that would water down the standards” for recognition.

“There is no question that the road to federal acknowledgement is one of Native American peoples’ ongoing challenges … but (the proposed regulations) would dilute tribal sovereignty by minimizing tribal identity,” says Robert Smith, CTBA secretary-treasurer and chairman of the Pala Band of Luiseño Indians.

Proposed OFA regulations would require Indian groups to document community existence and political authority since 1934 rather than 1789 or their first encounter with Europeans, as is currently the case.

Most regard the existing rule as being a near-impossible hurdle, particularly for tribes such as the Wintu, which was forced into hiding to avoid California’s genocidal Indian policies.

Other draft revisions deal with need for third-party documentation since 1900, the appeal process and procedures for expedited decisions.

“These reforms will not lower the bar for federal recognition,” Washburn says. “This is going to remain a rigorous process with difficult criteria.

And a potential casino developer is believed to be funding the Mishewal Wappo Indians of Napa Valley in a federal recognition lawsuit.

“It makes me wince to hear people on Capitol Hill complain about the role casino developers play in the process,” says attorney Heather Sibbison, a specialist in federal recognition.

“But the reality is the administrative process is so lengthy, convoluted and expensive, unless you can borrow money from somebody to do it you can’t get it done. The only people willing to lend these tribes money are big casino developers.”

“I don’t anticipate that the percentage of petitions being approved will change all that much,” Washburn says of the proposed regulations. “A lot of this is going to involve faster negative decisions.”

But he and others strongly refute Stand Up For California’s study as grossly exaggerating the potential impact of Washburn’s reforms.

“The statistical projections in the report are not supported,” Skibine says.

Stand Up For California Director Cheryl Schmit has partnered with MGM Resorts International of Las Vegas, one of the world’s largest commercial casino companies, in opposing tribal acknowledgement efforts in other states.

“I don’t see how anyone can arrive at the conclusion 34 more tribes will receive federal recognition,” William Micklin, executive director of the California Association of Tribal Governments, told GamblingCompliance.com.

“It’s far outside the bounds of reason.”

As is the case with the Cherokee groups, Micklin says, “most of the tribes in California now seeking federal recognition are splinter groups, or factions of existing tribes.

“They will never receive recognition.”

MLL’s Lawson and Roth, Newland says, are former BIA ethnologists who viewed the federal recognition process as “pseudo-science” based on “genetics and familial relationships” rather than the historic relationship between tribes and the federal government.

“Their paid remarks on this issue speak volumes,” Newland says. “The political relationship between a tribal nation and the United States cannot be described by pseudo-science. The existence of those relationships must be determined by the unique history shared by each tribe and the federal government.”

Even if there were an increase in recognized tribes, economists say the Indian casino market nationwide and in California is largely saturated and has not experienced significant growth since the 2008 depression.

California has three more licensed casinos than in 2005, according to state and federal regulators.

Four casinos have closed and several are struggling.

“There are groups that will eventually become recognized tribes,” she said. “But it’s a bit sensational to say they are going to get through the process and then get land for gaming.

“The process of getting land into trust for gaming is a long, expensive, uphill battle that takes 15 to 20 years or more. It’s next to impossible.”

“We have seen over the past decade a number of would-be tribes who have made it very clear their objective in federal recognition is a casino in the greater Los Angeles area,” lobbyist Tom Brierton says.

Micklin says it is highly unlikely urban Indian groups will be recognized.

“Those tribes that think they have a chance, if they are anywhere near an urban area, forget it,” he says.

Brierton says his clients are not consoled by the fact the Juaneño Band of Mission Indians of San Juan Capistrano, the Gabrielino Indians of Covina and others have been repeatedly rebuffed in attempts at recognition.

“We can’t look at it as something that is not reasonable or likely,” he says.

Gambling ‘Not An Option For Us’

The notion Indian groups are seeking federal recognition for the sole purpose of raking in casino riches has added fuel to the growing public and political perception of Native Americans not as culturally rich communities, but greedy purveyors of gambling.

Roughly two-thirds of the 366 tribes in the lower 48 states operate casinos. Nearly 60 others in California and Arizona share in gambling revenues. Two of Alaska’s 200 native villages offer bingo machines and pull-tabs.

The likelihood of the Nor Rel Muk Wintu getting into the gambling business is as remote as the picturesque, sparsely populated Trinity Valley, accessible only by narrow, zigzagging roads. Delgado says roadwork necessary to facilitate casino traffic would be very costly.

“Because of the winding roads in Trinity County, mitigation efforts would be impossible,” she says.

“Gaming is not where we’re at. That’s not why we’re doing this. We don’t even discuss it. It’s not an option for us.”

But the Wintu of the Trinity Valley are quickly becoming more the exception than the rule.

“It hurts us when other Indian groups are seeking recognition for the purpose of gambling. It really does,” Delgado says. “We’ve been in the process for 30 years. We need help for our people. We need housing. We need education.

“It’s not about gambling for us. It’s a bigger issue. We have so many other fights to fight.”