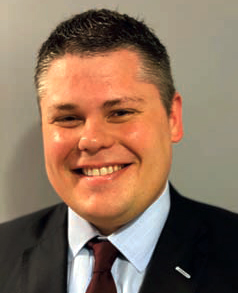 As a kid growing up in Absecon, New Jersey, Mike Peacock dreamed of being a diplomat or an ambassador, something in the foreign service. To chase those childhood dreams, he majored in international relations at the University of Pennsylvania. “But my sights were set on being a lawyer,” he says. “It’s a good interdisciplinary major. It was interesting and served me well.”

While an undergrad, Peacock did a semester internship in Washington, working at NASA, of all places. He worked in the history and archives department.

“I met astronauts and dealt with Freedom of Information Act requests about whether the moon landing was fake. I gained a lot of historical knowledge. It was cool,” he says.

Peacock graduated from Rutgers School of Law and got his first taste of the legal system in Atlantic County, New Jersey working as a paralegal and summer associate at Cooper Levenson.

When he finished law school, Peacock joined Nehmad, Perillo & Davis in Atlantic City, where he spent more than a half dozen years focused on real estate planning, zoning and development law. “But casinos and gaming were always in the background,” he says. In 2018, he signed with Fox Rothschild working on gaming law. And almost two years later he moved over to DLA Piper, also practicing gaming law.

The Supreme Court decision that overturned the ban on sports betting in 2018 opened the door for states throughout the U.S. “I dug in and learned a new area of law.”

Then the Covid-19 pandemic arrived and complicated any plans to expand amenities. “People were hesitant to dive into a crowded atmosphere.”

“It hindered me from traveling to other large offices for face time,” Peacock says. “At the same time, we have the technical capabilities to still meet with attorneys out there, down in satellite offices in Northfield, New Jersey. We still have limited travel. We’re stuck in our own corner of the world down here. It’s different than the way it was done in the past. With gaming law, you travel a lot whether to Las Vegas or overseas. Most of that has not happened. We have online presentations instead. But we’re still busy.”

For Peacock, the big obstacle was transitioning from a real estate lawyer to largely a gaming lawyer, learning a whole new area.

“I had to teach myself statutes of legalized gaming all over, the subject and procedurals, the regulators in each state,” he says.

Another hurdle was meeting the expectations of a variety of personalities, learning the writing style from each partner, he says.

He credits his father as a mentor, but also the myriad number of lawyers he associated with.

“I’ve had the good fortune to work with well-respected lawyers along the way,” he says. “But Timothy Lowry is the current mentor for me. Not only is he my supervisor but a friend of mine.”

Peacock has some advice for new lawyers in the gaming sphere: If you have the time and financial means, get a master’s in gaming law. “You have a leg up entering a law firm. There’s only a handful of deep specialties in gaming law.”