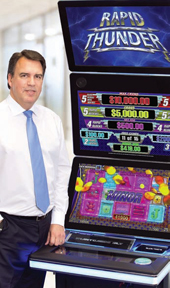 The announcement of the Rapid Thunder bonus feature, an in-built add-on to the Taco Tuesday, Land of Charms, Immortal Emperor, Immortal Princess, Baozang and Amulet of the Pharaoh game titles, has enhanced the Merkur Gaming Americas portfolio in an unique and truly dramatic manner.

Rapid Thunder’s free games phase is initiated when three of various scatter symbols appear during the player’s selected base game. The route to big jackpot wins is for the player to reveal and collect Rapid Thunder icons, highlighting game grid positions along the way with Rapid Thunder Halo symbols.

Rapid Thunder is an All-Prizes-Pay bonus feature. Players who win up to and including the Max Grand jackpot level have their wins paid cumulatively—meaning that, for example, a Grand-level winner can also win the Major, Minor and Mini jackpot prizes too, all paid together in one prize. Also, the player has multiple chances to win. Each Rapid Thunder symbol that appears is rewarded with an additional free game: and thus more opportunities to win.

“The game has a jackpot bonus, and the jackpot bonus is the game,” says Merkur Gaming Americas CEO Charles Hiten.