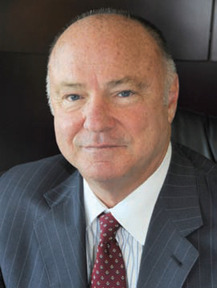 Governor Deval Patrick appointed Stephen Crosby chairman of the Massachusetts Gaming Commission in 2012. Four years later, there is only one casino—a racino in Plainville—open, with two others at least two years away. Crosby previously was the founding dean of the John W. McCormack Graduate School of Policy and Global Studies at University of Massachusetts Boston. He has more than 45 years of public policy experience. At the commission, Crosby has created one of the most respected regulatory bodies in the United States. He spoke with GGB Publisher Roger Gros at his offices in Boston in August.

GGB: There’s been a lot of criticism that there is only one casino up and running after four years. How much control did you really have over that?

Stephen Crosby: Well, a lot of it was in the act—principally the issues having to do with local control and litigation. And then there were also a lot of lawsuits, and a lot of politics. So, I would say, maybe a third of it was sort of within our control.

We chose to be very methodical, and we were very new to the game. We didn’t know much of anything. And we did feel very strongly that we wanted to make sure we created a competitive environment. So we spent a fair amount of time making sure that the industry knew that we were really open for business. There were no inside deals; this was going to be an open, competitive, transparent process. So, we could have sped it up, but I think we always felt strongly that getting it right was better than getting it fast.

What were some of the hurdles you met early on?

One of them was the whole background check process. We got these documents, this multi-jurisdictional individual background checks, and a lot of us thought this is unbelievably invasive.

But our consultants thought that this is the way it’s done, and that it was better to start out as a heavy regulator and retreat, rather than start light and go heavy.

The issue of competition was a major issue. There was kind of a subterranean belief here that Suffolk Downs and Caesars, who were partnered, had the inside track on the Eastern Massachusetts casino. And we didn’t want that to be the perception, because that was keeping other bidders from coming in. So we took our time and we created that perception that it was an open bidding process.

One of the things that you oversee that very few states with commercial casinos also oversee is the tribal gaming element. How do you handle that?

We don’t directly regulate the tribe, but we do have a compact, which has an agreement that says that we will give them certain kinds of financial benefits, and potentially exclusivity in exchange for which we get some money, but also we get this oversight role. But it’s a partnership; I want to be clear about that. We’re not regulating the tribe.

The commission decided that there would be only one tribal casino in the southeastern region, but a lawsuit is challenging the BIA’s decision to put land into trust. How are you handling that?

Massachusetts is broken up into three regions, and we have the authority to license one commercial casino in each of those three regions. We’ve done it in Western Mass, we’ve done it in Eastern Mass. Southeastern Mass is where the tribal casino is purported to be. We don’t really want two casinos down there, we thought, but we never have known for sure whether there ever would be a tribal casino. After three years, they got their land in trust, and for a variety of reasons, some of which have to do with the tribe, some of which have to do with the proposal itself, we decided not to award that commercial license. Then, the Federal District Court reversed the BIA’s decision, as you said, to award land in trust. So we are right back now to where we were four and a half years ago, which is wondering whether or not the tribe will ever get land in trust. So, at this point, we’re just sitting tight.

Tell us about your responsible gaming program, GameSense.

There was a lot of focus in our statute about promoting responsible gaming and trying to control problem gambling. We’ve taken that very seriously. We’ve put together a whole program that we call GameSense, which is a program that has its roots in Canada, although we’ve developed it quite a bit. And it has really three basic elements. First, we have a GameSense agent, a responsible gaming agent, on the casino floor, 16 hours a day. That person’s job is to inform people about how the games work.

The third element is the PlayMyWay, which is a play management system, what the industry sometimes refers to as “pre-commitment.” And, it is a system in Massachusetts, where when you put your player card in, up comes a screen that says, “Would you like to set budget?” How much are you willing to lose? Today, this week, this month? You can say no and move on. If you say yes, the system will warn you when you’re getting close to your budget. But it will never shut you down. It’s just a tool to help you manage your budget.