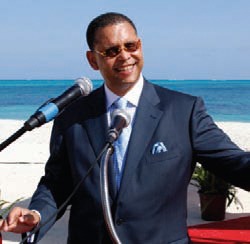 The Bahamas’ Baha Mar Resorts is building what is the largest single-phase resort development in the history of the Caribbean. With six hotels under four major brands and a 100,000-square-foot casino to be operated by a partner yet to be announced, the billion Baha Mar complex, slated to open in late 2014, is also among the world’s largest casino-related projects of recent years. It is expected to restore the Cable Beach area of Nassau, known as the “Bahamian Riviera” in the days before tourists flocked to neighboring Paradise Island and its Atlantis resort. Robert D. L. Sands, the senior vice president of the company, spoke of the progress on Baha Mar with Global Gaming Business Editor Frank Legato at his Nassau office in August.

GGB: Can you give us some background on the project?

Robert Sands: The project spans some eight years. Our visionary leader, Sarkis Izmirlian, a longtime resident of the Bahamas, was approached by the then government of the Bahamas, to invest in one or two of the hotels that were possibly available for sale on Cable Beach. His position at the time was that we have to make a major paradigm shift, where no longer is it viable to just invest in a hotel on the beach, but we need to introduce a totally different concept. Atlantis, at the time, as a resort destination, was doing really well on Paradise Island, and he said that the only way that he would consider this arrangement would be if we looked at creating a resort destination in Cable Beach, that will complement the similar situation on Paradise Island.

Cable Beach was once the top hotel area in the Bahamas, correct?

Cable Beach was once the playground, as it were, for visitors; it was the Bahamian Riviera… (Izmirlian) had a vision for turning this area back into what it was in its heyday.

You will have six hotels with four brands—was that difficult to achieve in this economy?

I think the recession has taught us a lesson. We’ve now introduced a new brand, a new strategy. Rather than putting all our eggs into one basket, we’ve now spread that risk and also created, I think, an enormous marketing opportunity by having multiple world-class brands.

How big a part of Baha Mar is the gaming component?

Gaming is certainly an important element of the Baha Mar brand. But I think it’s also important to say that all the elements together will really differentiate us as one of the desired choices in terms of brand. So, no one part by itself should be considered the dominant part. I think this is going to be a complete resort that has multiple offerings in terms of amenities, attractions, things to do. And all together, it will help create the success of the Baha Mar brand.

At the outset, you stated your goal of Bahamian participation in the construction and operation of the hotel. How has that panned out?

Yes, to date, we have tendered close to $190 million worth of work to Bahamians and have awarded close to $160 million to date. And we have committed to tendering close to $400 million. So we’re a third away in the project commitment in that area. The second thing is that we are on budget to achieve the job creations that we pledged. We’re close to 1,700 jobs for Bahamians, to date.

And now you’ve reached a recent milestone in construction?

Yes, we have reached the 100-foot milestone in the casino tower, which is the 10th floor of that particular building. We’re quite happy with that, because basically what it does for us is shows that the project is progressing as planned. And also, symbolically, it shows that yes, we should meet our goals for opening in late 2014.

Are you going to bring in an established gaming company to run the casino operation?

Yes. Obviously, the gaming company selected will play a pivotal role in the branding of the property. Our approach to all of our brand partners is they must have strong identity, they must be a leader in their field. Their reputation in terms of being unique, and ability to attract guests, are foremost in our minds. And the ability, then, to work together with other brands to help propel this new Baha Mar brand will be critical going forward.

Bahamians aren’t even allowed in the casinos, correct?

Yes, and nothing has changed about that. This has been the position of gaming in the Bahamas to date. But if in fact, the government, in their wisdom, decides to open up this door, we would welcome such an opportunity for some type of gambling within the casino by Bahamian nationals.

Have you initiated marketing efforts to U.S. markets? Where are your targets in that respect?

One of the critical things that we’ve been doing as a company has been the whole issue of developing the Baha Mar brand. And we’ve been doing it in a number of ways, creating what our look and reach would be like in the marketplace. We have not embarked on any major targeted marketing, other than promoting our residences, which is one of the first elements that we have launched in recent months. We have over 300 residences that we are offering to interested persons to be part of Baha Mar.

We’ve collaborated with the private and public-sector organizations in the Bahamas and the government of the Bahamas, in terms of working on coordinating increased airlift into the destination. And thirdly, the development of collaterals that will support our marketing efforts in the marketplace has been an initiative we have been focusing on.