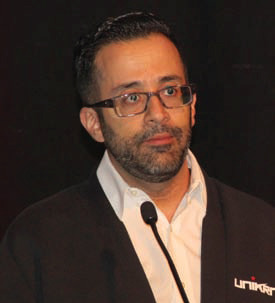 The rise of eSports has brought many questions about how or if it could be integrated into the casino industry. Rahul Sood’s Unikrn has done just that. The company, whose investors include Mark Cuban, is taking legal eSports bets in Australia and has designs on other sports betting jurisdictions. Sood says he’s representing eSports wagering as no different than wagering on traditional sports, and suggests that any betting on eSports should be subject to the same regulatory scrutiny that all sports face. He spoke with GGB Publisher Roger Gros in November.

GGB: Give us short outline of how you got involved in eSports and what your company does.

Rahul Sood: My first experience was to design hardware that you could play PC games on. Hewlett Packard eventually bought the company. I’ve been playing games ever since I was a kid, and as soon as that company got sold to HP, I wanted to get back into games. I’ve been keeping an eye out in the eSports area. At that time, it was amateur gaming tournaments where people would lug their PCs with them to community centers to play.

After selling to HP, I joined Microsoft and ended up starting Microsoft Ventures, a strategic partner for startups. I was working with startups from around world, and met a lot of great people. One of the companies Microsoft invested in was the company I ended up acquiring to start Unikrn. This company, Pinion, helped gaming communities build and monetize their traffic. I became friends with their CEO and we decided to start Unikrn.

Unikrn is a company that sits at the intersection of video games, sports and gambling.

So Unikrn takes bets on eSports. Tell us how that works.

Unikrn is a sports book for eSports. Not only do we take bets on professional eSports events, but we also have some really great skill-based technology.

I didn’t want Unikrn to begin taking bets via a loophole like DFS did. We wanted to go down a path of working with regulators to make sure our events and wagering were transparent, so we can build a real, sustainable business around eSports—legal, regulated, safe responsible gambling.

One of the first things we did when we started Unikrn was to visit Tabcorp in Australia, probably the largest bookmaker in the country, and a publicly traded company. They do in the neighborhood of $14 billion in turnover.

We gave them our idea about eSports and skill-based betting and they fell in love immediately. They got it. They quickly became our largest investor and great partner.

So now we’re accepting bets on eSports in Australia. We have more regions coming soon.

And because we own some and have such great relationships with other gaming communities, we’ve set up a free-to-play system where players can earn “Unikrns.” There’s no exchange between players or third parties, but you can trade your Unikrns for prizes. It’s a way for us to get people interested and involved until we can offer real-money betting in those areas. We can test out things there before we add them to the real-money site.

The thing that makes us unique is we’re the only dedicated eSports book in the world right now.

So how does the betting work?

It’s kind of like the NFL. People are betting which team will beat another. But the cool thing about eSports is that there is so much potential for in-play markets. It’s that instant gratification that people want these days.

People are always worrying about possible match-fixing in eSports if bet as a traditional sports bets. What do you say to make them comfortable with eSports’ integrity?

It’s like any other sport. There’s always the potential for match-fixing. We’ve seen it in tennis, soccer, cricket… It doesn’t happen much, but it happens. And you know what? We usually catch it. It won’t be any different with eSports. We’re dealing with competitive integrity issues. Our systems can spot betting anomalies, and we’re working on making it better every day. It’s better to support it and embrace it rather that turning your head and saying it doesn’t exist.

There are so many kids playing these games. How do you keep them from gambling?

Like any other sports betting operation, we have very sophisticated KYC systems in place. We know who the customer is. They’re registered with their ID, they have to be geolocated in order to legally place a bet. You can’t get into our system from the U.S., even with a proxy server. It just cannot happen.

What is the demographic of the eSports gambler?

Our players are of legal age, so it’s mostly between 18 and 32. When we first started, it was people who just loved eSports. They were very adept at understanding eSports. But over time, we’ve found there are lots of younger people who bet on traditional sports, and now they’re starting to bet on eSports on our platform because they’re learning about it. They’re realizing that once they learn about it, it’s really fun to watch.

Do eSports enthusiasts have a propensity to gamble?

It’s not that they just want to gamble, but if you go to an eSports event, you see how long it is and how engaged the audience is. That’s going to tweak the interest. If you go to a sporting event, you see people using their phone to text their friends or get the stats, and occasionally look up when something happens. At eSports events, they tend to be fixated on the action—for days, not just for a couple of hours. So when you add an in-game betting element, it’s very popular.