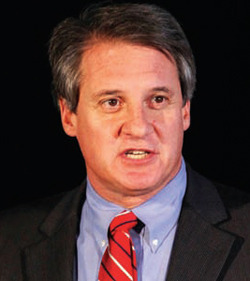 Earlier this year, Mitchell Grossinger Etess transitioned from his dual roles as chief executive officer of the Mohegan Tribal Gaming Authority (MTGA) and president and CEO of the Mohegan Sun resort in Connecticut to focus solely on his duties as head of the gaming authority. After ceding his role at Mohegan Sun to Jeff Hartman, Etess is now focusing on expanding the reach of MTGA with new properties, including a potential Mohegan Sun in Massachusetts, a management contract in Oregon, and Mohegan Sun Concord, at the historic Concord Hotel that was the main Catskills competitor of Grossinger’s, Etess’ family business. He spoke with Global Gaming Business Editor Frank Legato at the East Coast Gaming Congress in Atlantic City. For a podcast of this interview, visit www.ggbnews.com/podcasts.

GGB: You’ve just moved into a new role at MTGA. What is different for you now?

Etess: It’s really more of a reorganization than a new job. For the last four and a half years, I had been the CEO of MTGA as well as the CEO and GM, for lack of a better term, of Mohegan Sun. It became clear after a while that to really take the company forward and do what we need to do, that wasn’t going to be a good structure anymore. So, I went to the tribe and said I think this will be better. Jeff Hartman, with whom I worked for 14 years, took over as president of the Mohegan Sun. I have Bobby Soper running Pocono Downs reporting to me. I established a new group called Mohegan Gaming Advisors. Gary Van Hettinga, an industry veteran who had been working with us at Mohegan Sun as CFO for three years, is president of that group now. And we’re using that structure to really move things forward.

That strategy includes expansion of the tribe’s gaming operations. Most recently was an agreement with the Concord Hotel in the Catskills. Can you tell us about that?

We’ve reached an agreement with Concord Associates to be manager and to help develop the Mohegan Sun Concord. As you know, the Concord is one of two great resorts in the Catskills—it was Grossinger’s and the Concord. Interestingly, my family owned Grossinger’s. It’s somewhat funny, because the Concord was our rival back in the day. Lou Capelli owns both properties. At the Concord, a lot of work has been done; there have been a few stops and starts, but we believe the time is right. We believe we are going to have the regulatory approvals needed, and we’ll be developing a casino resort and racetrack there with the eighth harness license in New York. We believe that license will be given to us.

Yes, and it’s really important for the Catskills. People who are familiar with that area, who grew up there, who vacationed there and who go back there now, know how distressed it is. This is a $600 million project; this is immediate jobs, immediate development. We think it’s going to spur the economy of that region, and it will be something everybody can be proud of. So, it means a little more to me; not just having a deal for my company, but to be able to have a deal that’s going to have such positive impact is really rewarding.

Tell us about your ventures in Massachusetts and Oregon.

Obviously, there is no gaming law yet in Massachusetts. We were certain there was going to be a law passed last July; it didn’t happen. We believe ultimately it is going to be passed. We don’t know what shape or form that will take, but we believe that to maximize the benefit to the commonwealth of Massachusetts, there should a western Massachusetts destination. We believe we have the best site in western Massachusetts for development—it’s right off Exit 8 on the Mass Pike. We have a community that wants us, that’s supportive of the project. We have a great workforce. We have an area that again, like the Catskills, needs jobs, needs stimulation. We believe we have the best brand in gaming in the Northeast. Again, it seems like a very logical extension of Mohegan Sun.

We also have an Indian gaming project we’ve been involved with for about seven years, for the Cowlitz tribe—a federally recognized, landless tribe in Washington state. We have a piece of land we purchased for them that has now been put into trust and put into the public register for them to do gaming on. It’s about 15-17 miles outside of Portland, Oregon—a Nerf-ball throw off the highway! So, we’re really excited about that, and we’re really excited for the Cowlitz tribe.

In Pennsylvania, expansion has been on hold. Has there been any movement on starting the hotel at Pocono Downs?

We’ve been saying the hotel deal is almost ready for a long time, and it is. We’ve been waiting while doing some refinancing we’re working on now. We have the plans drawn up, the approvals are in place, and we’re just waiting to pull the trigger. Bobby’s very eager to get that hotel and to get some event space, and we’re hoping to be able to deliver that to him very soon.

Has your home Connecticut market begun to rebound?

In some respects, it has. Things are more vibrant. All the competitive juices are still there. Twin River, Empire, Foxwoods and Mohegan Sun are four pretty big operations competing with each other. But we’re feeling it coming back a little bit, much more so in table games, where there is less of a competitive factor. But we’ve right-sized our operation in terms of expenses, and we’ve still maintained a quality operation. Mohegan Sun is performing very, very well right now. When you have that and Pocono Downs, we think the state of MTGA is good.