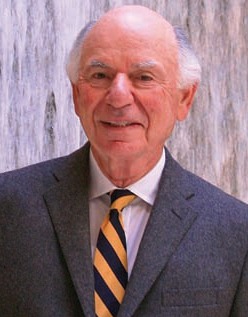 Michael Leven is stepping down at the end of the year as president and COO of Las Vegas Sands. At press time, there had been no announcement of a successor, but whoever is named will be measured against a very successful executive. Leven, who had been on the board of LVS, was asked to take over as COO when the company was floundering. The once-valuable stock had slumped to less than $2 per share, and the company had run out of money to fund its Asian expansion. Leven stepped in and engineered a financial turnaround that is remarkable. The stock price in November was around $60, the final Macau casino will open next year (the Parisian), the Las Vegas convention properties are more successful than ever, and strong revenue is still reported in Singapore. Leven spoke with GGB Publisher Roger Gros in his offices at the Venetian in Las Vegas.

GGB: When you first signed on as COO and president of LVS, you did it as a favor to your friend Sheldon Adelson. How long did it take you to realize it was going to be more than a short-term favor?

Michael Leven: The original contract was for two years, and then we had two extensions. It was a favor for Sheldon, but it was also a favor to myself. I was asked by Miriam Adelson to “come and help us fix the company.” She didn’t define exactly what she wanted fixed, but it was to help right the company, put the company back and execute Sheldon’s visions, and it’s a job that never ends, really.

What was your strategy to right the ship?

There were three significant strategies that we had to do. The first and foremost is we had to get our costs under control in Macau, in Asia and in Las Vegas. The second was to develop a plan to essentially monetize some of our Macau assets to develop cash for the company. That’s when we sold off 29 percent of Macau to a public entity. And the third was to get Singapore open properly so that it could start to generate funds for us to be able to finance the completion of two or three more properties in Macau. So, that was the combination of strategies, and what we had to do was put together the various people, the human resources, to get those things done within the legacy systems that existed in the business.

Singapore was an incredibly difficult project, wasn’t it?

Singapore was very interesting because the government was very deeply involved in the project, and everything needed government approval. And we were way behind. We didn’t have a strategy for the roof—for the SkyPark, what was going to be up there. Certain restaurants weren’t contracted for, we didn’t have the art museum finished and we didn’t have the relationship there of how to run it. And there were lots of other things. One of the floors in the MICE center wasn’t completed, so we really put together a lot of effort to get that open. Frankly, the opening in April of ’10 was not the best opening we’ve ever had, but by the time we got to June of ’10 we were off and running, and that place in the first eight months did about $700 million in EBITDA, a massive injection of capital to the company.

And in Macau, you built one place after another. You actually had to put the Sands Cotai Central on hiatus for a while. Was that a difficult choice?

The hotels at Cotai Central were management contracts, and we stopped the construction on those because we didn’t have the capital, and they weren’t financed. But by going public with Sands China, by getting the money coming in from Singapore, we were able to finance the completion of those properties. Then we changed the names within a matter of hours. Because of my previous experience, I just called the CEOs, and we got it done. When Shangri-La dropped out, I had both the Conrad name and the Holiday Inn name attached to it and the deal done.

What is your strategy in Asia?

The difficulty in Asia is that you don’t control the decision. In Vietnam, Korea and Japan—which are the three countries we’re interested in—it’s all about the political environment. Whether or not in Korea and Vietnam they’ll let locals play, what currency restrictions are and things like that, assuming you can solve those problems. And in Japan, just getting through the Diet. If any of those countries go, Las Vegas Sands will have a real shot at it, because of our financial strength—which is interesting to say after five years—and also our capability, because all of them want what we have provided in Singapore and in Macau, and even in Las Vegas.

You’ve had a great career in the hospitality industry even before you got here, so where does the Las Vegas Sands experience stand when you look at your entire career?

I think this was the pinnacle of any of the experiences I’ve had, because I think this was the toughest situation going in, with the most iconic chairman I’ve had. And I’ve had plenty of chairmen, but understanding him and how to get things done was satisfying. In addition, there were legacy systems here in the way of doing business that were difficult to overcome. But I think at the end of the day, this is the most visible and satisfying experience I’ve had in terms of change, in terms of execution, in terms of the people. The company today is very solidly successful financially.