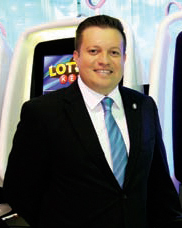 Ortiz Gaming, based in Spain, has made a bold and aggressive move into the Americas, and it has paid off in increased sales and a greater visibility for the company. Maurilio Silva is credited with being one of the founders of the “New Generation of Latin Bingo.” Silva has been with the Ortiz Group for almost two decades. As a business development director within the Ortiz Group, Silva has taken the Ortiz brand to new levels of global growth. Under his leadership, Ortiz Gaming Group became one of the top principal companies in electronic gaming machines. Silva now finds himself challenged with bringing the Ortiz brand to the United States, applying his experience in strategic planning and growth to the American market.

GGB: In the 20 years since your company was founded, you have grown into the largest supplier of electronic bingo in the world. Can you tell us what has distinguished your games in an increasingly crowded market?

Silva: There are two “secrets” to Ortiz Gaming’s success: the player experience and customer service to the operator. Our chairman, Alejandro Ortiz, designed our games to generate more time-in-chair and long-term repeat players. We added to that, math designed to surpass the floor average, regardless of what that average may be, and a genuine partnership with the operator to assure optimum revenue and operations.

Your main markets have been Latin America and Europe. What do you feel has been the critical factor in serving these markets?

Again, serving these markets—or any market—is a combination of serving the player and the operator. Ortiz Gaming has been very successful in creating a synthesis of those two seemingly opposite worlds. Typically games that players love are lower revenue-generators that are dependent on volume; or games that are higher revenue-generators but don’t get the play. Our experience has taught us how to capture the best of both of those worlds and apply them in Latin America and Europe, customized to the specific player behavior of the specific markets.

Is this your first big push to enter the U.S. market? Why is it that you have not pursued Native American Class II bingo markets in the past?

We have always held a tremendous respect for both Native American sovereignty and for the uniqueness of the players in Indian casinos (clearly, they are vastly different than the convention attendees and vacationers at destination resorts in Las Vegas and other places). Rather than try to “cookie-cutter” the phenomenal successes internationally, our philosophy at Ortiz Gaming has been to leverage our expertise in both customer service and player loyalty to offer games where that philosophy of partnership with the operator really works. Our company has now reached the point where we have a powerful offering to Native American casinos.

What is your strategy for penetrating the U.S. market?

The Ortiz Gaming “Bingo Is Back” push melds new technologies perfectly with the deep bingo-playing roots that gave birth to Indian gaming. The “Next Generation of Bingo” that we’ve created really is designed to transform the casino floor in terms of revenue—taking the best of the bingo world and the best of the reel world to combine the fierce loyalty of bingo players with the high drop of reel players. U.S. operators are very smart, and when they see this fusion in action, the question becomes less about presenting the benefits (they are pretty obvious after seeing the games in action) and more about how many games to start with, to introduce to players.

How much of your product line relies on classic bingo play, and how much on traditional slot play?

The worldwide success of Ortiz Gaming and its games has been the unique fusion of classic bingo with traditional slots. Grabbing the best of both worlds, we have created games that build that classic intense loyalty and time-in-chair, while offering the speed, bonuses and community excitement of traditional slots. Like classic bingo, the Ortiz Gaming games are nostalgic and encourage interaction; but like traditional slots, our games play faster than video slots and on a speed level on par with stepper-reels, but with bets and holds equal to and surpassing video slots. Rather than a “Class II” interpretation of a slot machine, our games are a genuine fusion of the best of both worlds, a true reimagined version of an electronic game.

Is there any plan to expand your library with Class III games for traditional casinos? How is that process going?

Ortiz Gaming games are GLI certified with both Class II and Class III versions. We intentionally introduced both versions of these games in the U.S. simultaneously to allow our technology innovations to benefit casinos across the board. Our experience with players has allowed us to create the ultimate player experience in games designed for frequent players in a locals or regional market. The player experience and technology remains the same whether presented as Class II or Class III.

Where do you see your company in five years?

The reception to our games, and especially to their unprecedented revenue-generation, has been incredible. We have had to increase production, support and sales staffs to meet the demand. Rather than being a “one-hit-wonder,” our company is posited to become a dominant manufacturer in the U.S. The challenge in that is, of course, meeting the demand that has been created by this success. The opportunities were best summed up, anecdotally, by a recent conversation overheard between a casino general manager and the sales representative of one of the large slot machine companies: “You guys have been sleeping comfortably for too long; you’d better look out because Ortiz is here, and that changes everything.”  We think that accurately defines the opportunity and our future.