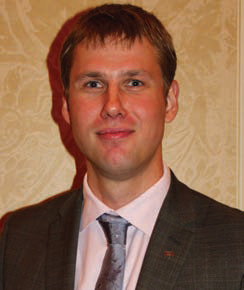 Olympic Entertainment Group is the largest casino operator in eastern and central Europe. With casinos in eight different countries—Estonia, Latvia, Lithuania, Poland, Slovakia, Belarus, Italy and most recently Malta—Madis Jääger has his hands full. As chairman and CEO of the group, Jääger concentrates on customer service to elevate his companies from his competitors. He admits non-gaming revenues aren’t the focus, but understands things like bars, restaurants, entertainment, and in some cases, hotels can make the difference. He spoke with GGB Publisher Roger Gros during the ICE trade show in London last month.

GGB: Tell us about your casino which opened recently in Malta.

Madis Jääger: About five weeks ago, we opened the largest casino in Malta, which, in terms of our size, really is the largest for us too. It’s really the crown jewel of the casino industry in Malta as well, located in a city center of entertainment in the Intercontinental Hotel. So the natural flow of people and the crowd congregates there. Prior to deciding to locate in Malta, we did a survey of our potential competitors and saw a real opportunity from the service point of view. Maybe I’m too arrogant to say this, but you cannot really compare our service to the competitors. It’s still about the service and provision of the games, loyalty programs and the attitude. It’s not only about pure gambling.

Do you have one casino that you consider your flagship property?

While the Malta property is bigger, I’d have to say our property in Riga (Latvia), the Voodoo Casino. It is really the attraction point of all of the Latvian entertainment. We have expanded and enlarged the casino from time to time, and it is becoming a hub, where people have to come just to see what is happening.

They even do not come to gamble; it’s more like a type of Las Vegas thing. People can gamble, but you can have a great restaurant with a very nice bar. So I would say it best illustrates what an Olympic casino should be.

Tell us about the casino you are planning to open in Tallinn in Estonia.

We are building right now a Hilton hotel, which will be the first Hilton in the Baltics, opening this summer. This will become our flagship casino, which means that we will be moving the majority of the business from the existing casino we operate now. The new casino will be triple the size of the existing one, with some very new things as well that we have not introduced before into the casino market there. So, it’s not only about the gambling. It’s not about the bars or some entertainment, but some new features, some new elements that we hope will be positively accepted by the customers.

What’s different about this project than your other casinos?

This one we are building from the ground up. Our model up until now has been we are tenants in a building that belongs to somebody else. This forces you into some sort of framework, or there are always some restrictions, about the floor layout, what is the entrance to the street, what is the entrance to the hotel, etc. With this Hilton project in Tallinn, we are integrating the casino with the hotel. This will give us the best layout, the best connections to the conference room where we can host poker tournaments, to the lobby, or to wherever. So, the whole product will be more or less like a small destination resort, which will attract tourists from Russia, where the casinos are not allowed. We’ll also attract players from Finland, Sweden and Norway. I believe that it will have a great future.

Olympic operates in multiple countries with very different regulations, tax rates and markets. How do you keep track of all these differences?

And the number of slot machines is, in many cases, driven by the tax rate as well. For example, in Slovakia we pay fixed tax per year, which doesn’t really matter if I operated only two months or 12 months; it’s a fixed tax per fiscal year. And the more machines you put on the floor, the higher your fixed cost. So it’s optimization, whether you want to take this fixed cost, and then hope for the revenues, or you decrease the number of devices, saving the tax but maybe missing out on revenue. So it’s really about finding the good balance of the profitability.

How important is non-gaming revenue to Olympic?

It’s not really important. When we’re looking at the millennials, they are influencing our businesses more and more every day. Right now we are not even competing that much against the other casinos. It’s becoming more about competing against how the millennials are spending their time and money. Where we operate, the nightclub thing is a little bit over, so it’s more about smaller lounges, some fine dining, small things which are not maybe too expensive, but still social. So, it’s really about competing with other alternatives of entertainment. But at the end of the day, our focus is on the thing that we are really good at, and that is the casinos.