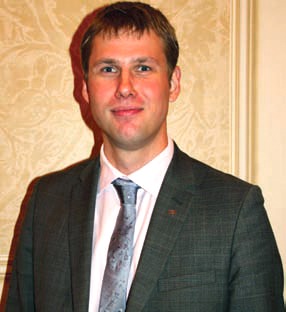 Madis Jääger is chairman of the management board and CEO of the Olympic Entertainment Group since 2012. He joined the management board in 2010. Founded by Armin Karu, who remains chairman of the board, in 1993, OEG is one of the major casino operators in Eastern Europe, based in Estonia. Jääger and Karu spoke with Global Gaming Business Publisher Roger Gros at last month’s G2E in Las Vegas.

GGB: Give us a quick overview of Olympic Entertainment.

Jääger: Today, OEG operates under the Olympic Casino brand in six countries: Estonia, Latvia, Lithuania, Poland, Slovakia and Belarus. We are also about to enter the Italian market. In total, we have 62 casinos on 23,480 square meters with 183 gaming tables and 2,487 slots, and with a staff of 2,349. In addition, we operate an online casino and poker room at Olympic-online.com.

Tell us about the recent deal you’ve made with an Italian operator.

We believe in the Italian market. Setting up a joint venture with a local operator seemed the most reasonable way to enter Italy. We will start with three proper VLT gaming venues. Olympic has almost 20 years of experience in operating casinos of this size, and our partner has excellent knowledge of the local market and its nuances. Since in Italy, average win per slot is notably higher than in our other markets, it is clearly an attractive market for us.

What is Olympic’s most important jurisdiction? Your home of Estonia?

While the home market is definitely important emotionally, it should not be singled out from the rational perspective. The Latvian market has been growing well in the recent year, and we have had positive developments in all our markets. I should say that our most important market is where we are entering next. Today it is Italy, tomorrow… you never know.

You had a number of casinos in Ukraine. A few years ago they supposedly banned casinos, yet some remain open. What is the status in that country?

This was clearly a most unpleasant development, especially since in a short time, Olympic managed to build up a good reputation among customers and other operators. We have been negotiating a compensation claim with the Ukrainian state, in line with the agreement between the government of the Republic of Estonia and the government of the Republic of Ukraine for the promotion and reciprocal protection of investments, and this dispute is still pending. Ukraine has repeatedly promised to reopen the market, but it has not yet happened.

Hungary recently outlawed slot parlors. With your experience in Ukraine and Russia’s actions several years ago, how do you keep track of the volatile politics in Eastern Europe?

Olympic has never operated anything in Russia, and this market is not among our current priorities. The experience that we got from Ukraine was the worst possible, and we hope that such drastic examples will only remain isolated events. The stronger the democratic and market economy traditions, the less likely the state is to strongly interfere in the development of a specific economic sector.

As for Olympic, we have always supported clear and strong regulation, especially provided that the state is able to supervise its implementation. We also have an experience from Romania where the widespread non-compliance of regulations weakened our competitive position as a law-abiding operator. Since the supervision did not improve in a couple of years, while the requirements on paper got ever tougher, we decided to pull out of this market.

What is the role of the E.U. in your operations? Is it the principal regulator or is that handled at the national level?

Specific regulations are national. At the same time, I would not rule out that one day E.U. would introduce regulations based on harmonized standards applicable on all member states or with minimum cosmetic changes. For instance, one such area where harmonized rules would be of great assistance is the regulation and taxation of online gaming. But in the light of the current situation, such development is not very likely.

What other jurisdictions are you interested in? Are you limited to Europe, or are you examining expansion into other parts of the world?

We have three or four countries constantly on our radar screens, and we also monitor developments taking place in tens of markets. And we are clearly not limiting our operations to Europe. I was recently asked whether we are interested in expanding to Asia. My answer was, which serious operator would not be interested in that market today? In short, we in Olympic are always interested to expand, provided that the terms and partners are right.

Olympic has an online gaming operation. Tell us how that operates across the European jurisdictions.

Olympic-online.com was the first gaming operator in Estonia that was issued a license for online gaming. In addition to the online casino, we have an online poker room that belongs to the world’s largest poker network, iPoker. Our current focus has been clearly on markets where the Olympic brand is well-recognized and popular thanks to our land-based operations.

U.S. operators are anxious to get involved in online gaming. What advice would you give them from an operator who currently utilizes online gaming?

Strong brand and impeccable reputation as an operator of land-based casinos are important prerequisites in offering online gaming. While it has been increasingly difficult to launch entirely new brands on the market, it is quite possible to become successful in expanding an existing brand into online gaming.