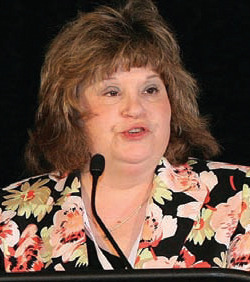 When Chris Christie became governor of New Jersey two years ago, he promised to streamline regulation over all businesses in the state, and that included the casino industry. A bill passed by the legislature earlier this year dramatically changed the roles of the two agencies responsible for oversight of the casinos, giving more power to the Division of Gaming Enforcement and taking power away from the Casino Control Commission, and reducing the overall costs of regulation in the state. CCC Chairwoman Linda Kassekert spoke with Global Gaming Business Editor Frank Legato about those changes, how it has affected her agency and how it has impacted the casino industry overall. For a podcast of this interview, visit www.ggbnews/podcasts.

GGB: Let’s start out with state Senate Bill 12, the regulatory reform legislation. How did the new law change the role of the commission?

Kassekert: What it did was move the day-to-day operations the commission had jurisdiction over before to the Division of Gaming Enforcement, so we could concentrate more fully on our core mission, which was casino licensing, key employee licensing and some other functions. So, we sort of morphed from regulating the day-to-day aspects to retaining a quasi-judicial role.

Did you spend a lot of your time on minutia before this?

We did. We had casino inspectors who were on the floor 24/7, we handled all the counts and the issuance of casino revenue taxes. So, this is a very different aspect, but it allows us to concentrate on casino licensing especially, which we see as our core mission.

As far as the regulatory system in general, how is it going to operate more efficiently, or better, going forward?

To what extent will you work with the DGE, and the new acting director, going forward?

I have a great relationship with Acting Director (David) Rebuck. I’ve known him for a number of years. We see a very cooperative relationship; we’ll work together. A number of our employees, as part of the changes in S12, are now at the division, because they assumed some of our functions. So I think it will be a very good, close, cooperative working relationship.

We’d like to touch on some of the matters before the commission right now. First, the boutique casino licenses—how many applications have you received?

We have received three applications. We promulgated the regulations that preceded them, because the legislature gave us that responsibility.

Landry’s has purchased Trump Marina and is transforming it into the Golden Nugget Atlantic City. Can you give us an update?

We unanimously approved their application for ICA (initial casino authorization—a temporary license). We were very excited by their presentation. We think it’s going to really bring a great energy to the Marina, and especially the synergy they’re creating with the Landry’s restaurant chain.

The stalled Revel project in Atlantic City is under way again. What is the prognosis for that development?

We’re looking forward to a summer 2012 opening. So, that’s good news. And, I think now that the economy is stabilizing, I’m hopeful that some of those other projects will come back and take a second look. Because the Pinnacle site, especially, is just a great land mass. It’s just wonderful; it’s right there on the Boardwalk. I’m hopeful there will be some reconsideration, if not by Pinnacle, by someone, to come back and fill up the site.

How involved are you with the CRDA’s plans for the tourism district and general improvements downtown?

I serve as a member of the CRDA, and we’ve got some very exciting things happening. A lot of the entities that were being run separately, like the convention and visitors authority, will be coming under CRDA. We’ve already moved to bring the Special Improvement District under the agency. It’s really a concentrated effort on that tourism district—keeping it clean, keeping it safe. It’s a real concentration of efforts, which is going to be great.

What is the most important part of that plan—what’s the first priority?

A lot of it is perception. We’ve had discussions over the years about the safety of Atlantic City, and the crime rate, and how the crime rate by comparison is not bad—but it’s a perception. That is our first goal—we’ve got to change that perception. We’ve got to have people feel comfortable on the Boardwalk, and have it be clean. The Special Improvement District, now a division of CRDA, is doing a great job in making sure the Boardwalk, which is really our front door, looks as beautiful as it can be.

You are very bullish on Atlantic City. Can you give us the reasons for your optimism?

We’ve just got so many exciting things going on. We went through a couple of very tough years, but so did everyone else. I think we’re well positioned to move forward. The Landry’s licensing was very exciting news, and as Revel continues their work and as the tourism district works to beautify the city, I think we have everything going for us. All these other gaming locations, I’m sure they have a lot to offer. But no one can offer the concentration—the restaurants, the shopping, the spas, the golf—that Atlantic City offers. And on top of all that, we’ve got a beautiful ocean and Boardwalk.