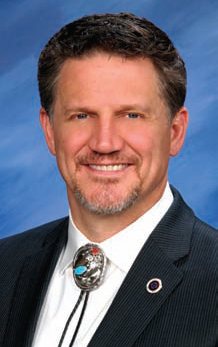 Kevin Brown was elected as chairman of the Mohegan Tribal Council in his first attempt in 2013. “Red Eagle” spent 25 years in the U.S. Army, with deployment experience and management expertise at stateside bases. He has several degrees, and served as an analyst at the Pentagon. With extensive leadership and organizational management experience, Brown was the perfect choice to lead the Mohegan tribe at this time, as it is facing competition from Massachusetts, diversifying its economy and building yet another expansion to its flagship property, Mohegan Sun. He spoke with GGB Publisher Roger Gros at Mohegan Sun in October.

GGB: You spent a lot of years in the Army.

But I’m guessing being chairman of the tribe, you get reactions that are very unmilitary.

Kevin Brown: That’s funny. A lot of folks have sort of a misconception about the very hierarchical structure of the military, and following orders. But the last 10 to 14 years of combat, and the deployments that come with it, put soldiers in a very uncertain and violent environment, where they have to be very agile and adaptive. I’ve got those experiences under my belt, as well as dealing with tribal sheiks in different countries, let alone my own tribal politics here in the U.S.

Your tribe is unique in Indian Country, in that you’ve really got your members involved in the management of the company, from Bobby Soper on down.

We’re very proud of that. It was a long-term goal and part of the vision of this entire development. And we have reached probably the ultimate here, by having Bobby now seated as of October 1, as the heir to Mitchell Etess as the CEO and president of Mohegan Tribal Gaming Authority. And as you said, it trickles right down to Ray Pineault, who’s the president and general manager of this property and Kara

Fox-LaRose in Pocono Downs in Pennsylvania. She’s assistant general manager of that property. There are many others, as well. However, we also recognized early on that if we weren’t careful, we’d make the mistake of accelerating down that path too quickly, and it would be to our own detriment. We were very fortunate and very well advised in the early years to recognize that we needed to have industry experts to cultivate, mentor and bring these folks along to the point that we’re at now.

Your preparation for the challenge of the casinos in Massachusetts is impressive. How is that strategy working out right now?

It’s twofold. It’s moving down two parallel paths at the same time, and it seems that everyone I talk to has allowed themselves to get pigeonholed into thinking we’re only doing one or the other. We are both improving and developing this property to make it that much more of a destination tourist location, an integrated resort location, and looking for other ways to directly compete with Massachusetts by developing other gaming locations.

And in the news quite a bit lately is our joint venture with the Mashantucket Pequot Tribe, who own and operate Foxwoods. We could consume this entire interview just talking about the history of that relationship. We competed against each other fiercely in this corner of New England and now we come together to fight against Massachusetts.

And I think that you can see that this joint venture has been taken seriously. The press is reporting that MGM is reassessing the scope of their project in Springfield. We are not—as we were once alleged to be doing—going to build a “slots in the box” kind of environment. In fact, we’re going to build a first-class casino like the one we operate here in Uncasville, and we’re going to directly compete with whatever MGM puts up north. And their box is getting smaller, isn’t it?

You just got back from Korea. It sounds like a tremendous opportunity there. We all know that gaming in Asia is booming, even with the slump in Macau. What do you see in Korea?

We’re talking about a potential property, positioned strategically, right on the Incheon International Airport grounds. You will fly into that airport, and you will see the Mohegan Sun-inspired project on the north side of the runway. And within five to seven minutes, you can be in the front door.

What was the thought initially, to become involved in Asia?

Well, two things, I would say. But first and foremost, I don’t know if there’s such a thing as a pyrrhic loss, but the Massachusetts pursuit, the Massachusetts competition, was sort of a pyrrhic loss for us. Because the silver lining was that the world, those that are seeking to have operators come in, began to recognize that Mohegan is in that upper crust of operators. And this initial connection to Korea came as a result of not landing the Boston casino, but someone seeing that we could compete toe to toe with a guy like Steve Wynn, and do very well.

And the second thing is that there is an affinity for Native American culture in Korea. So that became sort of a hook for us as well.