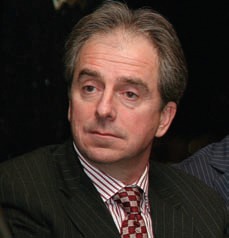 Jim Ryan is a veteran of the online gaming wars. When he was appointed CEO of PartyGaming in 2008, he had already led several online gaming companies to success. He helped to integrate PartyGaming with bwin upon the merger of the companies in 2011, and now holds the co-CEO title, along with Norbert Teufelberger. PartyGaming’s withdrawal from the American market after the passage of the Unlawful Internet Gambling Enforcement Act of 2006 (UIGEA) is about to pay dividends as online gaming is set to be legalized in several states, if not yet by the federal government. But Ryan clearly prefers a federal bill making online poker legal. He spoke with GGB Publisher Roger Gros just after delivering the conference keynote speech at G2E on October 3. To hear a podcast of the interview, visit www.ggbnews/podcasts.

GGB: In your address to G2E attendees, you stated that you expect the U.S. government to legalize and regulate online poker. Do you really believe that will happen?

Ryan: It will certainly happen. The real question is when. But when it does, you’ll see some very interesting forms of industry consolidation happen, as well.

Do you believe it will happen in the lame-duck session of Congress?

If I could predict that, I’d be sitting on the beach somewhere (laughs). And if you speak to the members of the bwin.party board, you will find that I am consistently wrong, so I am no longer going to try and forecast that.

The companies that were active during the post-UIGEA period are being penalized under the proposed Reid-Kyl bill. Is that fair?

Well, let’s talk about the way I understand it. The companies that were active are going to have the opportunity to go to the U.S. courts to get a ruling that what they were doing was not contrary to U.S. law. Given that those who left the market had already concluded that it was contrary to U.S. law, I don’t know how you come to any other conclusion. So I think it’s fair.

Your company left the U.S. market after UIGEA and lost millions if not billions of dollars as a result. Do you hope to make that up once online poker is legalized and you can take part in that market?

Yes, that’s the hope. But it’s up to the markets to determine what the cash flows are. We believe that a legal U.S. online poker market would be worth $4 billion. We expect to capture a reasonable share of that.

We have to take a look at how we will come back. We’ll never come back as we were before. We’re not going to be the operator. U.S. businesses will be the operators. We can hope to obtain the privilege to be a supplier and manufacturer for the operators and bring our marketing, technology and brand expertise to work with our partners. Right now, our partners are MGM, Boyd Gaming and the United Auburn Indians. So if we can be a participant in the market as a supplier/manufacturer, we’re thrilled.

If i-gaming is legalized on a state-by-state basis, and not on the preferred federal basis, how does that impact your business?

We’ve made it very clear that whether it’s federal or state, we’re excited about that. Either one represents a significant opportunity for us.

What can U.S. jurisdictions learn from Europe as it pertains to regulation and taxation?

The U.S. is fortunate that there has been a test bed for regulations going on in Europe for the past 10 years. From our perspective, there are a lot of lessons that can be learned—the experience of a number of European countries that have learned from each other for one. Italy started cautiously and by the end of this year, all products will be licensed, regulated and taxed. Spain and Denmark have regulated most products.

The biggest theme at G2E is let’s try and learn the lessons. The dangers of doing a patchwork quilt of different regulations are significant. Whether those dangers are sufficient to get the federal government to act is still up in the air.

And what happens to a small state like Nevada, which lacks a critical mass to conduct serious online poker games?

State compacting would make a lot of sense for Nevada and a lot of other states. But that’s the problem with state-by-state. You’ll have a number of states that simply won’t have the population pool to make it an interesting revenue generator. It’s only going to work if the states they compact with have the same regulations. Then you get into the question of state sovereignty. It’s incredibly complex, but it will only work if the rules are the same.

Michael Leven, COO of Las Vegas Sands, said that he didn’t think there was a lot of money to be made with an online poker site. Do you agree?

I would answer that question by citing our experience. When the U.S. market was open, it was a $2 billion market. Even after UIGEA, it was estimated at a $1.5 billion to $2.7 billion market. And that’s without the ability to advertise and with difficulty processing payments. So if it was legalized, regulated and taxed, I don’t think there’s any doubt these numbers would grow substantially.

Is it necessary for land-based casinos to introduce social gaming sites? How are you handling that with your current clients?

What we’ve done is announce an acquisition of a social games business based in the Ukraine called Orneon. We are now building a complete social games and sports betting casino. In the not-too-distant future, we’ll be introducing this program based on the party brands. Our U.S. partners have not decided yet if they want to be part of that, but they are certainly welcome. And bwin.party entertainment is going to be a major player in that market.