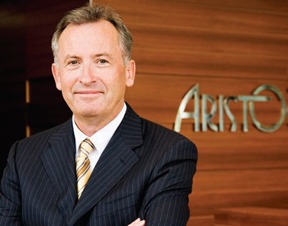 The supplier side of the gaming industry has recently changed dramatically—beginning with the purchase of WMS by Scientific Games, then the Bally Technologies buy of SHFL entertainment, continuing through GTECH’s acquisition of IGT and dramatically concluding with Scientific Games gobbling up Bally. Aristocrat has done its part with a recent purchase of VLC and later Paltronics. Jamie Odell, the chief executive of Aristocrat, believes that consolidation is not over, and there will be more synergistic buys and joint ventures in the future. He spoke with GGB Publisher Roger Gros at the Aristocrat offices in Las Vegas in August. To hear a full podcast of this interview, visit ggbmagazine.com.

GGB: You recently brought on a group of impressive people in the slot development area. How has this helped you achieve the goal of increasing recurring revenue from slot operations?

Odell: For the last three or four years, we’ve focused on a couple of areas. At the heart of it has been great content, and to achieve that, we needed great providers of content… We recognized at the heart of our business, Aristocrat historically had great content, but it needed to refresh that particularly to be more American-focused.

And then at the heart of this, we realized that compared to our U.S.-based competitors, we weren’t as strong as we wanted to be in Class III gaming operations. It’s a great business. The reason for that is understandable; most of our designers were based out of Australia at the time, and of course, gaming ops isn’t a segment which exists to any extent in Australia. So, we started out on that journey, and generically focused more and more of our Australian studios on U.S. gaming ops, and we saw them build great proprietary brands. We started a new studio here three or four years ago. And from there, we grew more and more confidence that we were growing our install base. We’ve been really fortunate to attract people like Joe Kaminkow and Dan Marks. Those guys have really raised the bar yet again.

Tell us about the unusual success story, the Walking Dead slot machine that you debuted last year.

I remember when Ted Has came to us with that proposal, it was kind of, “Where’s that coming from? This is edgy.” But we just had confidence in the studio and the guys, because of the history and the track record with us, and that’s been a great product.

And I was watching it being played last night in a Las Vegas casino. It’s kind of weird to see zombies on a slot machine, but it works.

And then Joe’s great product with his team, the Secret Sauce Studio—a great group of folks—was Batman on the Wonder Wheels cabinet. It just looks phenomenal. It’s being well-played, obviously, which is what really matters. And Aristocrat wouldn’t normally have made that sort of game, really cutting-edge hardware, massive hardware, lights, images, animation. The whole package is just super fun, clearly premium American-based. This is up there with the best of the best.

What led to the VLC purchase?

These great products led us to think strategically about where we go to from here. Now we’ve got a natural trajectory in Class III gaming ops, so what’s a good business for us? Class II was the answer, so we looked at the VGT business, which is a phenomenal business. Jon Yarbrough’s built up great people, a great brand, great affinity in tribal casinos, in Oklahoma in particular. It’s got a lot of complementary aspects to our own core content, which is very strong and powerful, built on fantastic platforms, which has always been Aristocrat’s core.

We’ve never been in Class II, so there was no overlap at all.

Tell us what the Paltronics deal brings to Aristocrat.

We have a great casino management system business with Oasis. It’s long-term running the system across the whole casino, so you need to have this close understanding of where the strategies of our customers are going. We’ve been using Paltronics for some time here, and in other parts of the world, and we really felt that this was an area of our business where we needed to step up. We took a look at our capabilities across the Oasis system, and as you look at the needs of customers, we really felt Paltronics, in terms of their network gaming and jackpot capability, was something that we wanted in-house. So we spoke to Angelo Palmisano, who’s joined us. He’s a phenomenal guy. Again, it was a good fit—a much smaller business, obviously, but it still makes sense.

What do you think the casino floor will look like in a few years?

One of the events of going to a casino is to see this beautiful hardware. It goes for the whole casino experience, right? The beautiful lobbies, the restaurants, the bars.

But, the beautiful hardware surrounding the great content isn’t going to change. That’s one of the reasons people go out—to be entertained, to be with other people.

The other part of your question, I think, will go to what regulators will allow. How comfortable will they feel about devices being used for slot-type play? The regulators will be the leaders of how we do that.

But I think there’s a natural feeling that mobile devices within the casino walls, or the grounds, make sense. What’s interesting if you then go back to the digital market and social, you see that on tablets and iPads, slot content works really well. The quality of the pixilation and the graphics works really well. But I don’t see this sort of radical change where the casino suddenly looks like a row of iPads. That’s not going to happen. Otherwise, you might as well go to a library.