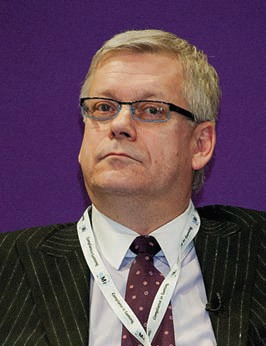 Gosling is chief operating officer of Regency Entertainment Group, operator of two major casinos in Greece—in Thessaloniki in Northern Greece and Mont Parnes in Athens—which are among Europe’s largest and most profitable casinos. In nearly two years with Regency, Gosling has led an effort to re-define casino operations in Greece, as the land-based casino industry is emerging from the recession by adapting to changes in the marketplace. The Greek casino industry is still batting competition, however, from illegal casinos that could threaten to derail plans for a new VLT market in the country. Gosling spoke with Global Gaming Business Editor Frank Legato at February’s ICE Totally Gaming trade show in London about the challenges that lay ahead in Greece. To hear a full podcast of this interview, including Gosling’s views on legal VLTs and online gaming in Greece, visit ggbnews.com/podcasts.

GGB: Regency’s two casinos control 56 perent of the market in Greece today, but take us back to the privatization of 1995. The casinos were designed for a quite different market, weren’t they?

Ian Gosling: When the casinos came about, the whole emphasis was placed on tourism. The casino business was coming to Greece to help the tourism industry. Well, it wasn’t too long after opening that we saw that, in actual fact, what we had generated was a very heavy locals market casino. In Thessaloniki, we have over a million visitors every year through the casino, and in Athens, it’s over that. The vast majority of those are Greeks. So there is the odd tourist and a foreign visitor that turns up, but really we’re running two locals casinos.

The casino business in Greece was phenomenal before that. The propensity to gamble among the Greeks is second to none. But once the recession began affecting Europe—and of course it affected Greece far worse than anywhere else—we saw sort of a downturn starting in 2008, and that’s continued until today.

There was a smoking ban during that time as well, right?

Yes. Under pressure from the European Union, Greece did introduce a smoking ban into the casinos, but this wasn’t a total ban. What we were allowed to do was pay to the state a certain taxation, and segment areas of our casinos—smoking areas and areas as non-smoking. That was a positive. The Greeks are prolific smokers, and as the smoking ban was introduced into the casino, the complimentary tobacco that the casino was offering to its customers was something that we did stop. The savings between the two casinos ran into the millions.

How have you adjusted to what you might call the new normal in the market?

We recognize that our players didn’t lose their passion to play. But what they had now was a smaller bankroll. So, what we decided to do was to utilize the size of our casinos. By European standards, our casinos are large; three of Europe’s four largest casinos are in Greece. So, what we did is drive the volume. We looked to bring in as many people as we possibly can, and then we just priced accordingly. We were looking to give them value for money and to sell them more time. We did that through our pricing structure, with our machines and our table games, and also with the food and beverage and entertainment offerings that we have.

How have illegal or gray-market casinos affected business?

Historically, Greece has always had gray machines. I remember opening up the casino in 1996 in Thessaloniki, and the gray market was pretty prevalent then. Later, it was reduced and the police departments and gaming authorities tackled the issue and brought it under control. But during this recessionary period—over the last five years—we’ve seen the whole gray market grow again, not only in machine play, but also with table games. We see a lot of private, illegal poker clubs. We see illegal tables, and we see illegal slot machines, and illegal internet sites as well. So, the gray market is as big as it ever was, and right now there doesn’t seem to be the appetite for anybody to really tackle the problem.

These places have no regulations or taxation on them?

Greece runs a tight regulatory shop. They have rigid controls, and the casinos observe those and operate to those standards. But the gray market doesn’t have these. They can solicit customers a lot easier; they’re in prime locations, downtown locations. They’re not paying their staff in the correct way; they’re making black money payments to their staff, so no social security is being paid. There is no tax going to the state, and at the same time, as we in the casinos are watching the gray market grow, the government decides to put an extra 2 percent on our tax, but ignore this gray market. And if that gray market wasn’t there, then of course the casino revenues would increase, and the taxation would roll back to the government.

What can and should be done about this?