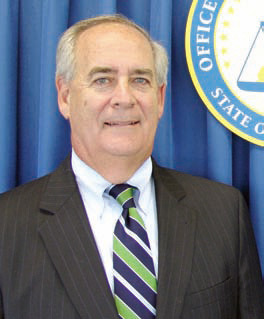 David Rebuck has been the director of New Jersey’s Division of Gaming Enforcement for the past seven volatile years. He came into office with a charge to fundamentally change the regulatory structure in New Jersey, creating an investigative/licensing arrangement between the DGE and the Casino Control Commission. Then he had to deal with the economic crater that hit Atlantic City following the 2007 recession that culminated with the closing of four casinos in 2014. In the meantime, he oversaw the introduction of legal iGaming into New Jersey.

GGB: Let’s start with the last year, in which Atlantic City has absorbed the loss of four casinos. Revenues have stabilized and most experts believe the market has “right-sized.” How is the DGE responding to this new reality?

Rebuck: We spent the past year responding to the closing of four casinos in 2014. It was something we saw coming, but it was worse than I had anticipated. So we reduced the number of staff that was necessary to oversee 12 casinos to one that was effective for eight.

And stabilization is the word I would use. We’re no longer seeing the revenue decline month after month; I think we’re at the point now where we see the casinos actually having a chance to compete against the surrounding states, so we have stabilization with the opportunity for growth.

Since Atlantic City is a free market in gaming, there is no limit on licenses. Do you believe that adding more licenses makes sense for businesses?

We’ve had several groups come to us over the past year to look at operating in Atlantic City. We’ve met with all of them, and up until now, none have decided to move forward. I think this demonstrates the reality of the market, and unless someone is reading it a different way, these groups have declined to become involved.

Let’s move to the North Jersey casino referendum. While we all agree that this would be a disaster for Atlantic City, the DGE has a statewide responsibility to ensure gaming is operated with integrity. Where does the DGE stand on this referendum?

We serve the governor’s office, and his view is that the people of New Jersey should be able to have a voice on whether there is gaming expansion outside of Atlantic City. So we’re pleased to be able to support that bill, and we’re ready, willing and able to do what is necessary under the law to implement the expansion of gaming if that is the choice of the people.

Does it bother you that there are few specifics contained in the bill?

Those who oppose the expansion of gaming, particularly here in the Atlantic City area, point to the lack of specifics in the bill. Their complaint is that people don’t know what they are voting for. They say, “How can you make that decision unless you know the details like the location, the tax rate and other things?” From the legislature’s point of view, they want to keep their options open. All these details would be filled in after the referendum is passed. So we’ll be ready to provide input and options if it ever comes to that point.

Let’s turn to the good news over the past year, the growth of iGaming in New Jersey. Why do you think it has finally taken off and found a foothold with the public?

I think a lot of it was growing pains. The assumption that U.S. online players would be the same as European players didn’t really hold up. So, it took a while for the online casinos to get to know their customers. Their marketing strategies have become more sophisticated.

I also think that the introduction of new games and products has made a big difference. And the improvement in technology has helped too. No longer is geolocation an issue. Payment processing has improved, although it’s still not perfect. And players now understand how to play, how the procedures work, and how they can have fun. It’s a combination of all these things.

Tell us about the liquidity agreement that you’ve reached with the UK Gambling Commission.

We sent letters to our licensees that also operate in the United Kingdom and asked them to suggest ways we could include players from both jurisdictions in the same pool. We first talked to the UK Gambling Commission about how this would work and we both agreed it could be done with cooperation from the licensees.

With 9 million people in New Jersey, and more than 63 million in the United Kingdom, this would mean a massive increase in liquidity for New Jersey operators. Even when you discount children and non-gamblers, it gives us access to a market that is very familiar with online gaming. That number is one-fifth of the total U.S. population.

Will this include all casino gaming?

Not initially. Our intent is to increase the liquidity of online poker, by exposing the games to many more players. Later, it could be expanded to include all casino games. We’ve given our licensees until August 1 to respond, and we’ll figure out where we go from there.

We’d still have to figure out lots of issues: specific regulations, how the tax rate from each jurisdiction would be applied, player ID and geolocation issues, and other things we probably haven’t even considered yet. But you have to start somewhere.

But we’re very serious about this, and we want to move it along as quickly as possible, so iGaming in New Jersey will continue the impressive growth we’ve shown over the last 15 months.