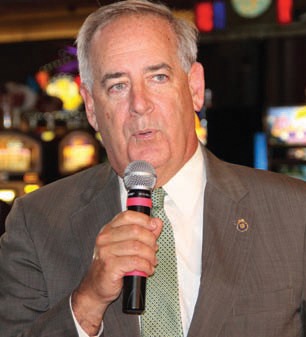 New Jersey is just the third state to legalize online gaming in the U.S. But with a population of 9 million, the state is much larger than the other two states that have legalized online gaming, Nevada and Delaware, and will be a better proving ground for the industry. David Rebuck, the director of the New Jersey Division of Gaming Enforcement, has been working hard to write the regulations, determine a schedule and consider all the unforeseen issues that may arise once the games go live. Rebuck, recently named by the International Masters of Gaming Law as “Regulator of the Year,” sat down with GGB Publisher Roger Gros in his office in Atlantic City in July. To hear a full version of this podcast, visit ggbmagazine.com.

GGB: How prepared were you when the governor signed the bill to legalize online gaming? Had you done research? Established a process should this happen?

Rebuck: We had done significant research into the issue before the bill was passed. And we have a very aggressive time frame. The governor signed the bipartisan bill into law in February, which encourages the division to have regulations and systems in place for permissible internet wagering three to nine months after the bill became law. We are moving deliberately to that schedule, and we’re going to push the industry to achieve those goals too. At this point, the “go live” date is November 26. The bill says that 45 days before the go-live date, the director can appeal to the Casino Control Commission for an extension if he doesn’t believe he can meet that date.

How many operators do you expect to be ready when you are ready?

I’m very confident that we’ll have at least three major operators ready to go on day one. And I expect that number to go up quickly after that. We’ll have the opportunity to meet that goal.

New Jersey has full online gaming versus only poker in Nevada. What impact does that make?

It makes it more challenging. We have more players who want to participate in making internet wagering work. We have 9 million people in this state, so those companies believe it will work here. But we’re also in a corridor where there are tremendous populations on our borders who may come into the state to play on the internet.

Let’s talk about the lack of a “bad actor” clause in the New Jersey bill. I know you can’t comment specifically on the PokerStars situation because of an ongoing licensing investigation, but in general, if a company came before the DGE for licensing and had some of these pre-existing issues, what would be some of your concerns?

Under the law signed by Governor Christie, there is no five-year ban as they have in Nevada against companies that violated the federal law against accepting U.S. bets after 2006. This is left to the Division to determine. So we have the opportunity to look at every company and see what their performance was in the U.S. during that time. We don’t have a set bar, but we do have a chance to determine if the company is suitable to do business in New Jersey. Just like we do with land-based gaming.

We’re dealing with many companies that have been in business around the world, so there’s a lot of skeletons in closets throughout this industry. It’s our job to find those skeletons, just like we would with land-based operations. They don’t have a carte blanche ability to come in free and clear. We’ll look at each one individually.

The bwin.party deal with Borgata and MGM stipulates that bwin gets something like 65 percent of the profits from those online operations. Doesn’t that make them the primary operator? Shouldn’t they be held to a standard that any casino operator is held to?

But in this area—and in any future sports-wagering area—they were for it. So as businessmen, I have to look at them and agree with their business model. We can regulate anything, and we’ll do that. We’ll follow that money and make sure that the people who are the managers and board members are more than suitable. Our standard of licensing for members of the casino service industry is almost as high as the operators themselves. The integrity issues are the same.

How about problem gambling, self-exclusion, underage gambling… all the hot-button issues? Are you confident you can handle these issues?

I am confident, but I’m also aware we’re going to keep learning as we go along. The governor has made very clear that he’s very concerned about this. We’re working with not only the casinos, but also the compulsive gambling groups and Rutgers University about how to identify thes people in the internet world. We want to know best practices and research. The technology gives us some new opportunities, but it also gives us some challenges. Our dialogue is open with all these groups. Everyone has an opinion on what works and what doesn’t. Support it by research, show us the research and we’ll give it a try. Nobody wants this activity to hurt anyone.