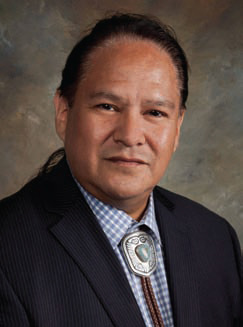 Washington state hosts one of the most unique gaming industries in the U.S. With tribal and commercial casinos, the state is a often a beachhead in the gaming industry. Chris Stearns, a member of the Navajo tribe, and an expert in Indian gaming law, was appointed to the Washington Gambling Commission in 2013 and recently reappointed to a term that will last until 2021. He has paid close attention to iGaming and possible implications in Washington state, as well as the spread of illegal gambling in the state. He spoke with GGB Publisher Roger Gros at G2E in Las Vegas in October.

GGB: Give us a thumbnail sketch of what the gaming industry is like in Washington and what your area of responsibility is there.

Chris Stearns: We oversee not just the regulation of the commercial games, which are operated by card rooms—pull-tab, punch board, bingo operators, raffles—we are also a law enforcement agency, so we prevent illegal gaming. And in fact, that is a large part of what we do. And then when it comes to tribal gaming, because of the way the federal law is structured, we co-regulate with the tribes. I think Washington has a really good structure, when it comes to the tribes. We’re one of the few states where there is no revenue sharing. That’s worked out well, both for Washington citizens and for the tribal nations.

Do the tribes pay any kind of regulatory cost?

They do. Under the compacts, they pay the cost of regulation. There are also small payments, but significant in terms of the actual number and the size, to localities to help mitigate things that come with gaming—crime, traffic and such. And then there are also contributions to a responsible gaming program.

Tell us about the “mini casinos.” Are they really that small?

Some are, but, some we call “enhanced card rooms,” and they can be pretty large in size. They’re located in urban and rural areas, and they’re pretty popular. There are some limitations that they have, that maybe tribal operators don’t have. But in general, they’re very popular.

You’ve been very interested iGaming as it might pertain to Washington state. Give me some of your thoughts on where iGaming is going right now.

We’ve been following it for about three years or so. Back then, it seemed like the next big thing, but I’m glad we’ve paid attention to it. One of the things we do is to give the governor and the legislature all the information they need, so we’re not just in a reactive stance, but we can proactively see what’s happening. So, we thought iGaming was something we should be studying.

Tribal casinos in Washington are all on reservation land. Is there any movement toward off-reservation casinos?

Yes, there are two active requests for the Bureau of Indian Affairs to put land into trust. They have approved the first part of a two-part step for the Spokane tribe. And the Spokane tribe has proposed to have land and gaming operation near the city of Spokane. There’s some controversy, and that decision now rests with the governor, to decide whether or not he’s going to concur.

When someone becomes an executive at a tribal casino, is the tribal gaming commission responsible for doing the licensing of that official or is that the responsibility of your agency?

We also license individuals who work at Class III facilities, so we do that with the tribe. The tribe will often do the first pass-through, and they’ll make their decision. And if there is some decision that we don’t agree on, we can work that out.

There have been so many vendors that really got their start in Washington state, especially the table game vendors. Do you get involved in approving those games?

Yes, we do get involved. And I think one of the reasons that there are a number of people who get their start in Washington is that rules are actually very strict. So, if you can pass Washington’s requirements, you can probably get your game licensed in other jurisdictions.

Testing slot machines is always a big issue. Do you use private labs?

We have our own lab. But we don’t really have slot machines. The tribes have a tribal lottery system, which is an electronic system that is based on scratch lottery tickets. Those are Class III machines, and we approve and test those. But the tribes also work with their own testing labs. And that is something we’re looking at, at the request of the tribes, to see if there is some duplication, and if so, if that is something that needs to be changed. We’re having those kinds of discussions with the tribes right now.

There sometimes is a perception that Indian gaming is unregulated, even though we know it’s regulated at many levels. What do you say to people when they say tribal gaming isn’t regulated?

What we say is that our experience is that tribal gaming is not only regulated, but it is well regulated. It is very effective. We have a very good relationship with the tribes, and we can certainly say that they do an exceedingly great job of regulating gaming in Washington.