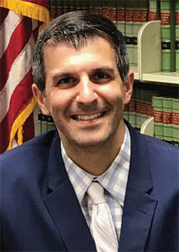 Afshien Lashkari is a Jersey boy. He grew up in Cranford in central New Jersey, obtained a bachelor of science in electrical engineering from Rutgers, and joined the state Division of Gaming Enforcement (DGE) in South Jersey as lead engineer for the Technical Services Bureau.

“When I saw the job posting and did my research on all that the NJDGE does regarding the regulation of the Atlantic City casino industry, it seemed like a very exciting opportunity,” he says.

More than 17 years later, the excitement hasn’t diminished, Lashkari says. As technology has evolved, the products submitted for approval continuously change, making every day different. No longer does his department just test slot machines in brick-and-mortar casinos. With the legalization of iGaming in 2013, the responsibilities expanded to include the testing of web systems and approving online live dealer integrations as well as approving a multi-jurisdictional poker network.

In 2018, the scope expanded again to include sports betting systems, both brick-and-mortar and online. Such testing ensures products comply with state regulations prior to being released to the public.

“My role allows me to utilize my technical experience as well as my strategic management background gained from my MBA,” he says.

Lashkari’s job is not without obstacles. His department was tasked with launching internet gaming in nine months. Within that period, his team created a strong foundation with the technology as well as testing protocols to comply with regulations.

“The key to any challenge is to identify the critical success factors, which allows you to focus on the most important elements of the project,” says Lashkari, who recently completed his first century ride, biking more than 100 miles.

Lashkari credits those around him for guidance, from his parents, who encouraged him, to his wife, Jenny, who supports his passion and enthusiasm for the industry.

“During my professional career, I’ve also been lucky in that I’ve learned a great deal from every boss,” he says. “In my opinion, a characteristic of leadership is one where a culture is created that allows an employee to continue taking on additional responsibilities as they prove themselves.”

The phrase “lessons learned” serves as one of Lashkari’s credos. Sometimes efforts may not work out as planned, he says. “The important part is to evaluate the situation to determine what went wrong, then taking that feedback and using it as a lesson learned for the next time.”

His experience with a jurisdiction at the forefront of both internet gaming and sports betting can open a host of doors for the future.

“I would like to be in a position to continue helping with the growth of these industries, especially as more and more states pass legislation to provide these types of gaming,” says Lashkari, who enjoys spending time with his nephews, 7-year-old Leonardo and 1-year-old Marcelo.

He has a tip for those coming up in the industry: remember every project provides additional knowledge and opportunities for self-improvement.

“The other piece of advice I would give to younger people is to never be afraid to ask questions about a topic,” he says. “Take advantage of the experienced people around you to help create a great foundation in gaming especially in the beginning of your career.”