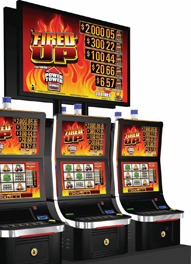 It was two years ago that Illinois-based Incredible Technologies—known then as the largest U.S. manufacturer of coin-operated amusement games and the producer of the famous “Golden Tee Golf” game popular from arcades to bars—first arrived at Global Gaming Expo with proprietary casino slot games.

Last year, IT arrived at G2E with a couple of hit games under its belt, and a few new, untested games, but in the ensuing year, the company has scored more hits, notably with what is now its sole licensed brand, “Archie Money Funnies,” as the company moved to a new headquarters building and focused on spreading its games to new jurisdictions.

This year, Incredible Technologies arrives at G2E with games that have been field-tested and have shown to be proven earners—all in a new, state-of-the-art cabinet that places the company’s games on par with all the more seasoned slot-makers.

“In years past, we’ve brought games that have not been proven as winners yet,” comments Caitlin Harte, marketing associate for Incredible Technologies. “We haven’t had the catalogue to back up a new cabinet. This year, we’re only bringing proven performers that have gone through our six-month beta test market.

“We’re happy to say that we have a catalogue of games that can back up the amount of properties we’re installed at.” That would be a total of 1,500 games, at more than 150 casino sites in 16 states, so far.

“Things in the last year have been moving and grooving for us,” Harte says. “We’re seeing more successful, longer-lasting titles on the floor.”

Those games include “Crazy Money” and “King of Bling,” the company’s first two hit titles, and “Leonidas,” which Harte says has resonated with players. “Leonidas had the most player uploads to YouTube,” she says. “We read the player forums, and they’re talking about the game. It’s cool for a small company like us to see things like that.”

Archie Money Funnies, based on the legendary comic strip, has been an “overwhelming success,” according to Harte. “It was a game that we weren’t sure how the public was going to react to, but it seems to be striking a chord with players,” she says. “It’s earning like crazy, and we’re installing it across the country.”

“As we are gaining traction in the industry, we wanted to bring in someone from one of the larger companies who had a whole lot of experience in the game development process,” says Richard Ditton, co-founder and executive vice president of Incredible Technologies.

Palermo says IT’s product sold him on the company. “One of the decisions I had to make was where was I heading after WMS,” he explains. “Looking what they were developing, I could really see where this company was going to make a big impact. I saw a new platform. I saw a team that had a couple of years experience in gaming under their belt. And I saw the ability to make a pretty big impact in the market.”

Palermo split IT’s slot product into three game series—E-Play, for the entertainment series of low-volatility games; V-Pro, with higher volatility; and the I-Series, “our Innovation Collection,” says Harte, “which we’ve been known for with King of Bling, Crazy Money, and the crazy spinning reels and sidewinders.”

“Jim has really helped with product segmentation,” says Harte. “We’re hoping it becomes clear to players that we have products that are for everybody. With the segmentation, we’re making it clear that if you sit at an Archie Money Funnies game, you’re not going to get your butt kicked—but if you sit at a Leonidas game, you might, but you may hit big wins as well.”

One of the drawbacks faced by IT in its first years as a casino supplier has been the presentation—Harte says the original hardware limited game designers as to what they could do.

The new games being brought to G2E this year were created on a new cabinet to be unveiled at the show. Called Infiniti U23, the state-of-the-art cabinet features two horizontal 23-inch touch-screen monitors in a sleek, ergonomic setup. Highlights to game visuals are provide by “Intelligent Bank Lighting” that provides in-game, multi-colored lighting displays, synchronized and sequenced according to game events.

The Infiniti U23 also features a built-in digital signage support system—a 55-inch overhead LCD display compatible with the company’s IT Simple Sign Display kits, allowing the casino to customize messages, and a premium sound package. “It’s a simple sign package that makes it very affordable for the operator to add on marketing,” says Palermo. “They can use in-house signs that fit into our stands very easily.”

Harte says the new cabinet has freed IT’s game designers to produce innovative new core games. “Now, we have the capability of doing things on the top box that we didn’t have before,” she explains. “We can do wheel-spinning, progressives and other features we haven’t been able to do because we haven’t had the fast enough hardware inside.”

The comparisons to IT’s original cabinet, the U2, show night-and-day results, with games overall earning about 250 percent higher on Infiniti U23 than on the former cabinet. Tests of established games like Herd and Crazy Money show the same games on the new cabinet earning about 50 percent higher than the originals.

“With the cabinet, we’re proving to the public that we’re investing in technology; we’re not just sitting back watching,” says Harte.

The new cabinet has allowed IT to expand its library of proven games. IT is bringing game banks on the Infiniti cabinet in all of Palermo’s new game categories.

Highlights include “Lion’s Roar,” the first “ways to win” game from IT.  A four-by-five screen pays for adjacent symbols in the non-payline game, for a total of 1,024 possible ways to win on each spin.

A free-spin bonus round occurs in one of three different “bonus worlds”—Kenya, Siberia or the Amazon. Each environment includes different bonus features like mystery wilds and multipliers. Free spins can retrigger up to a maximum 100 free games.

“The Quest of Perseus” recreates the mythical Greek story of Medusa and Perseus, who battles the dreaded monster in a Free Spin Battle with stacked “Perseus” symbols providing extra wins.

“Lady of the Dead” is a 25-line E-Play game tailored for Latin American markets, celebrating Dia de Muertos (Day of the Dead). The graphics feature authentic imagery associated with Day of the Dead celebrations, along with game features like a three-level progressive, random “Popping Wilds” and full-reel Lady of the Dead top-paying symbols. If the player collects 25 Lady of the Dead symbols, it triggers a spin on a bonus wheel that can lead to one of the progressives.

The Latin American theme, says Palermo, coincides nicely with the recent awarding of IT’s gaming license in Peru. He says the company has a big following in the Miami parimutuel casinos as well, where he predicts the game will do extremely well.

“Fortuno the Great” is a 25-line game recreating the experience of old-time carnival magic, with a three-level progressive, Popping Wilds and full symbol reels, similar to Lady of the Dead.

“Cash Fairies” is a 30-line E-Play game built around mischievous pixies that meet on the reels to trigger one of two second-screen picking games. Behind each pick are instant credits, additional picks and doors to additional bonus rounds. A free-spin round can be retriggered up to 100 free games.

“Medieval Gold” is a renaissance-themed game that is packed with a lot of special features like “Archer Random Rewards;” mystery events like “King Me,” which upgrades lower-paying symbols to King symbols; and “Royal Wilds,” which replaces all symbols on the middle three reels with wild symbols. The random archer arrow can also hit a bull’s-eye to trigger one of the progressives.

“Money Inferno” is a sequel to IT’s popular “Crazy Money,” including a “Money Catch” bonus in which players must tap the screen to “catch” flying dollar bills. IT includes many of the special features of Crazy Money, such as “Angle Pays.”

“Our lineup competes well with any of the other companies,” says Ditton. “Every game you will see has been on test and has earned well.”

Incredible Technologies, he says, is set to fire up casino floors. And YouTube.