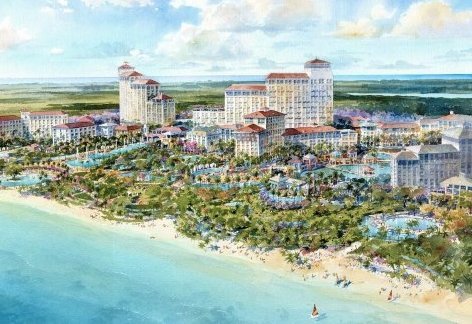 Mention the name “Baha Mar” to a local, and you will see eyes light up.

It is a gesture of hope for this outpost of Paradise—an outpost with many pockets that have seen better days. In Nassau, the capital of the Bahamas and erstwhile epicenter of the Caribbean resort region, the hope invoked by the name of Baha Mar is for the return of the prosperity which Cable Beach, one of the first vacation spots in the Caribbean, enjoyed for half a century.

But the hope of Baha Mar Resort project, which broke ground February 21 after nearly six years of planning and frequent challenges, goes beyond Cable Beach, or even Nassau’s home island of New Providence. The Bahamas itself—and on a broader scope, the Caribbean and the overall casino resort industry—look to the massive complex as a sign the gaming leisure sector is finally emerging from the recession.

Outside of Asia, that sector, identified in recent years by idle construction sites, half-built mega-resorts and stalled financing deals, has seen nothing like Baha Mar since before the struggles to open CityCenter and the Cosmopolitan on the Las Vegas Strip. A $3.4 billion project, Baha Mar is the most ambitious and largest casino resort project in the history of the Bahamas, and it is, by far, the largest active gaming-related construction project in the Western Hemisphere.

At the groundbreaking ceremony, the West’s only mega-resort project was celebrated by Baha Mar officials, Bahamian government officials and dignitaries from China, the source of a financing package of a scope that has been all but impossible of late.

The celebration was all about the start of construction (efforts which actually were already well under way near the groundbreaking site) that will transform the legendary Cable Beach area into a massive resort complex including six hotels with a total of 3,800 rooms, a 50,000-square-foot “retail village,” an 18-hole Jack Nicklaus signature golf course, three signature spas, the largest convention center in the Bahamas, 200,000 square feet of meeting space, and a 100,000-square-foot casino—the largest in the Caribbean, twice the size of the current casino king, Atlantis on nearby Paradise Island.

The hotels, retail stores and other amenities will be spread across a 1,000-acre site with 3,000 feet of continuous beachfront.

The owners of Baha Mar say the new resort has a chance to finally lift the Bahamas and the rest of the Caribbean out of the recession, bringing new tourists to an area in dire need of renewal after years of low visitation.

“Baha Mar, born from a singular vision, is surprisingly breathtaking in its magnitude,” said Sarkis Izmirlian, Baha Mar chairman and CEO, at the groundbreaking ceremony. “The vision of Baha Mar started more than five years ago with a plan to deliver an authentic Caribbean experience combining the essence and spirit of the Bahamas with the distinction of luxury resorts. The world has never seen what we are about to do.”

There were many times during the past five years that some thought the world would never see the vision at all. The Baha Mar group conceived the project in 2005, after Izmirlian’s family, headed by developer Dikran Izmirlian, bought three adjacent hotels along Cable Beach—the Sheraton Nassau Beach Resort, the Wyndham Nassau Resort and Breezes Resort Bahamas. The idea was to have those properties form one end of a master-planned vacation complex intended to revive the fortunes of the Cable Beach area, which was becoming a fading vacation resort thanks to the recession.

Sarkis Izmirlian formed Baha Mar Ltd. and sought partners—the first being the former Harrah’s Entertainment, which signed on for a 43 percent equity investment. However, Harrah’s pulled out in 2008, which has led to ongoing legal battles, the most recent decision being a dismissal of Baha Mar’s lawsuit by a New York judge in early 2010.

By that time, though, Baha Mar had found a new financier—the Export-Import Bank of China, known as the Exim Bank. The bank had been dabbling in hospitality projects in the West, including a deal to finance $1 billion to finish the Revel project in Atlantic City, an arrangement that collapsed last year after Morgan Stanley announced it was pulling out of the Boardwalk project.

“While there were some naysayers along the way, we never doubted the viability of this unique project,” said Izmirlian, who added at a press conference after the groundbreaking that there is plenty of room for the new resort to flourish without cannibalizing existing hotels—notably current market leader Atlantis. “I don’t think the Bahamas can’t handle two projects of this size,” he said. “When you combine all the hotels in New Providence, you’ll have 10,000 rooms once we’ve built out. There are 150,000 hotel rooms in Orlando; there are 150,000 hotel rooms in Las Vegas. You can’t tell me that we as a country can’t do better than that.”

Officials of the Chinese construction firm are anxious to prove they can handle a major resort project of such magnitude, and have assured the owners they will complete it in the remarkable timeline of three years—it will be opened in a single phase in 2014. “They’re very aware of what the project means to their reputation, and to the Bahamas’ reputation,” says Baha Mar President Don Robinson. “They are 100 percent committed to completing it on time, on budget, and as quickly as they can. They’re aware of how visible this will be to the world, and they’re not going to fall behind.”

Another challenge faced by the Baha Mar group after the Harrah’s pullout was finding experienced hospitality firms to run the hotels. Izmirlian’s team secured three of the best-known hotel brands in the world—Rosewood Hotels & Resorts, Morgans Hotel Group and Hyatt Hotels Corporation. Each will place its banner on one of the Baha Mar hotels.

There will be six hotels in all—the existing Sheraton and Wyndham properties, plus four hotels of different price points and purposes: a luxury resort, a “lifestyle resort,” a convention resort and the casino resort.

According to Robinson, the Baha Mar group is taking its time in a search for a new partner for the casino resort—which may or may not attach its own brand to what will be the largest casino-hotel in the Caribbean. “All options are on the table,” he says. “We now have the opportunity to go into the market and examine well-established brands with well-established loyalty programs, but we’ve also been given some advice from certain casinos and CEOs indicating that you can build your own brand. Everything is on the table.”

With all the elements of the project in place, the remaining challenges for Baha Mar involved gaining the approval of the Bahamian and Chinese governments. For the Bahamas, it was an easy sell: In a country suffering under a 15 percent unemployment rate, the Baha Mar project is all about jobs.

Currently, the largest non-government employer is Atlantis, with more than 6,000 jobs. All told, Baha Mar will double that with a total of 12,000 new jobs—4,000 local construction jobs and 8,000 permanent jobs with more than $305 million in new wages to the region.

The operator says the project will raise the average income for a Bahamian family from $29,000 to $33,500 in the first year alone after opening, and will provide $4.7 billion in tax revenue and an increase in GDP to $11.2 billion over a 20-year period.

“It’s important to take care of the destination you are in,” says Robinson. “This project represents about 10 percent of the GDP of the country. We will hire 7,000-8,000 employees to operate Phase One, and 99-plus percent will be Bahamians.”

Still, there was initial resistance from the Bahamian government, centered around the plan to import 8,150 Chinese laborers to work on the project. However, as Senior VP Robert Sands noted after the groundbreaking ceremony, at the heart of the controversy was a mistaken notion that only Chinese workers were going to be used. He said only an average of 750 Chinese workers will be working on the development at any time over the 50-month construction period, and the bulk of them will be used during a six-month period in the middle of the construction phase.

“The first phase of this work is being done almost exclusively by Bahamians,” Sands said. “The large influx (of Chinese workers) will not be here until between Month 18 and Month 24, and then it will fall off again.”

One of the first orders of business as construction is ongoing is to make sure the Bahamian workforce will be ready when the resort opens in 2014. The operator is establishing the Baha Mar Service and Training Academy, first to train Bahamians in the construction trades, but eventually to develop into a facility to train the staff of the resort’s hotels and casino. “We’re expecting thousands of Bahamians who need to be prepared to work for the various hotel brands and the casino,” says Robinson. “We want to make sure they have the training they need to hit the ground running when the project opens.”

As the only mega-resort project under construction anywhere in the Western Hemisphere, Baha Mar is being watched closely by investors as a potential catalyst for a new era of prosperity in the Caribbean.

“This is a historic day not only for Baha Mar, but for the Bahamas, our partners and, just as significantly, for the global tourism industry,” said Izmirlian. “Baha Mar represents an unprecedented alliance of powerhouses in the hospitality, financial and construction industries, and signals a shifting of sands for the travel industry. Baha Mar represents the birth of a new generation of destination resorts that will compete on a world scale.”