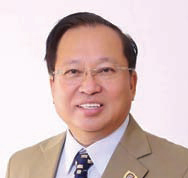 Augustine Vinh has over 30 years of professional, technical and management experience in the Asian-Pacific, European and West African regions, with a concentration in economic development strategies, management, regulatory and institutional reforms, bilateral, multi-lateral project finance and banking finance. For many years, Vinh has been a senior adviser in Asia for many projects of World Bank, including China, the Philippines, Vietnam, Mongolia, Laos and others. He spoke with GGB Publisher Roger Gros from Hanoi in February.

GGB: You were the first to report some of the details of the decree on citizens entering casinos. How long did the government take to research the facts, and how did they do it?

The country’s top leadership commissioned, in June 2013, a confidential research study to look at the possibility of allowing local Vietnamese to enter two designated integrated resorts, one on the Van Don Island, Ha Long Bay in the north, and the other on Phu Quoc Island in the south. The positive impacts of the study are the basis for the ruling Communist Party to issue, in September 2016, a decision to allow locals to enter the above two casinos on a three-year trial basis

Did you play a role in helping the government decide about dropping the locals gambling ban?

I was actively involved in providing the various government agencies with studies, unbiased opinions, comments and inputs to the gaming draft decrees. I spearheaded the three-year trial proposal for local Vietnamese players and lobbied for its ratification.

Where once the government was requiring a $4 billion investment, that has now been adjusted to $2 billion. What is the reason for that change?

The government, in the early stage, probably wanted to replicate the experience of Singapore in attracting major investors for the large-scale gaming projects, which called for an investment of about $4 billion. After various unsuccessful attempts and after reviews of investors’ recommendations, the government has decided to lower the initial capital investment to a more reasonable amount of $2 billion.

Each year thousands of local Vietnamese travel to neighboring countries to gamble, taking with them millions of dollars. By allowing locals to play and by lowering the initial investment amount, the government hopes to create a more attractive investment climate to bring in strategic investors and, in the same time, allow locals with gaming and entertainment activities to keep their money in the country.

The entrance fee as set by the decree, about $45 per entry and $1,100 for a monthly pass, is reasonable to a lot of local players, considering the betting amounts in local underground gambling dens.

There were two casinos that seem to be approved to accept locals, but that has changed. Some reports suggest that Grand Ho Tram may also participate. What is your impression about the casinos that will be included in the test?

The ruling party has designated the two integrated resorts mentioned previously to accept Vietnamese on a three-year trial basis. The Ministry of Finance followed suit and drafted a gaming decree, which reflected the party’s decision. The prime minister’s office, at the last minute, to avoid any impression of potential preferential treatment, has removed the names of these two sites from the final decree. The language of the decree gives, however, the ruling party the final say on either keeping these two sites or adding a new location, e.g., Ho Tram, for local Vietnamese.

Two of the casinos prominently mentioned are not even under construction yet. How does that impact the test? Does it start when the casinos open or does it start on a specific date?

The construction of the Van Don integrated resort progresses smoothly. The airport runway is being finished and the land for the casino sites is being cleared. The Phu Quoc integrated resort is being completed, and the opening date is tentatively scheduled late this summer. The three-year trial basis will kick in whenever the first integrated resort opens its door to the public. The government, at the end of the trial, will be able to collect information on the players—for example, demographic data, background, gaming patterns, propensity to play, betting amounts, etc.