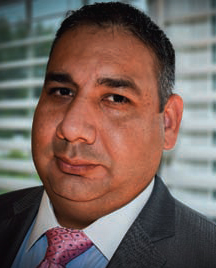 David Garcia, executive director of analytics and optimization at Foxwoods Resort Casino in Connecticut, has faced many challenges during his 17-year career in gaming. Garcia, who originally wanted to become an engineer, has taken the “problem solver” mentality of an engineer and applied it to create a successful career in the gaming industry, paving his own path and earning the trust of his executives along the way.

Originally from Los Angeles, Garcia moved to Texas, zeroing in on the sole goal of playing college basketball until a car accident in his senior year stirred him to re-evaluate his future. He realized he had two choices: to continue pursuing college basketball with no certainty on where that would lead him, or to focus on his education and post-education career. Garcia decided on the latter, graduating as valedictorian of his high school and attending Vanderbilt University, where he would major in mathematics and computer science with the goal of pursuing an engineering career. Though he ultimately did not end up as an engineer, the lessons he learned in school have carried him far in the gaming industry.

Engineers are natural problem solvers. They approach every project as a new problem that needs an innovative solution instead of looking in a book for answers. Garcia carried this approach with him throughout his career while recognizing that, although he was an analytical person, he needed to learn the operations to solve the problems. He accomplished this by working for several operators in various corporate and property roles, and he gained exposure to over 40 casino operations. He states that through this experience, “you quickly realize that the operations are similar with only minor differences, and that you can apply the best practices you have learned across all of them.”

A turning point in his career came after the merger of Ameristar and Pinnacle, when he was promoted to a president’s associate. In that role, he realized that he enjoyed partaking in the company’s strategy that would bring large organizational changes. Later, after his first stint with Foxwoods, he moved back to Las Vegas to work for MGM as the executive director of revenue optimization before his promotion to executive director of operational analytics and enterprise reporting, a new position within the company.

Garcia was given a big team and big responsibilities, including taking lead of a highly visible variable labor initiative, resulting in double the initial labor savings target. In this role, he was able to utilize his problem-solving abilities to effectively create positive change for the organization.

His next step transpired when Foxwoods recruited him back to be part of the executive committee, where he became “a part of change that helps drive us,” as he puts it. Coming out of the Covid-19 shutdown, Garcia has played a pivotal role in driving the “transformational change that led to the highest profitability Foxwoods has seen in years,” he says, through his own financial models and dashboards built on the property’s business intelligence program. Through his efforts, the property can now confidently predict how the casino is going to perform on any given day, aiding various departments and staffing levels based on the projections.

Besides taking pride in solving problems for the company, Garcia enjoys mentoring and developing the people on his team and those who are younger than him.

As he puts it, “I want them to learn but also to not make all of the hard mistakes I did along the way if I can prevent it.”

He advises others seeking advancement to learn as much of the operation as they can.

“Most people become experts in one area and move up,” he says. “I’m a firm believer in learning as much as possible about every operation.”

Garcia believes that once they learn the operation, they need to believe in themselves and take on the hardest areas that need help.

“Once you establish yourself as someone who can drive change to areas that are in need, you will keep getting more and more opportunities for growth,” advises Garcia, a mentality that he has lived out with great success.