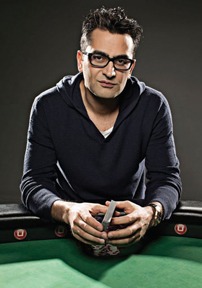 Two-time World Poker Tour champion Antonio Esfandiari has signed a deal with Ultimate Poker to promote its website as a brand ambassador.

Esfandiari, known in poker circles as “The Magician,” is the first professional poker player to promote a U.S.-licensed online poker company. Ultimate Poker is owned by Nevada-based Station Casinos, which also owns the Ultimate Fighting Championship brand. While licensed by the state, Ultimate Poker has yet to go live with its website in Nevada, as it awaits approval of its gaming technology.

Along with winning two World Poker Tour titles and three World Series of Poker individual championships, Esfandiari is a commentator for ESPN’s coverage of the World Series of Poker. He is No. 1 in all-time tournament poker winnings in the world. He has won more than $23 million playing professional poker.

“We’re thrilled to have Antonio Esfandiari represent our company,” said Tom Breitling, chairman of Ultimate Poker. “Antonio is the ultimate champion and modern poker player. He brings the gaming lifestyle to the online arena with his work-hard, play-hard attitude.”

Breitling said the company is “working hard” to become one of the first poker websites to go live in the state.

According to Brian Balsbaugh, CEO of Poker Royalty, a Las Vegas-based firm that manages the careers of poker players, Ultimate Poker is taking the same marketing strategy that PokerStars and Full Tilt Poker took before being shut out of the U.S. market.

“History has proven the one clear way to attract new poker players is through professional endorsement,” Balsbaugh told the Las Vegas Review Journal. “I think we will see that strategy used with success again in the U.S. online poker market.”