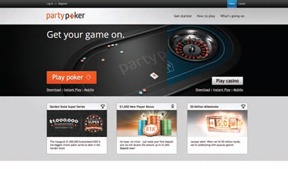 PartyPoker NJ has just released an extensive software upgrade of its online platform that focuses on tournament play.

PartyPoker shares its online poker network in New Jersey with the Borgata Hotel Casino & Spa in Atlantic City. The network has been the leading provider of online poker in the state.

The new software includes an overhaul to the tournament lobby, introduction of a variety of new in-game features and improved mobile geolocation programs.

Mobile users can expect “greater certainty and increased accuracy” when it comes to geolocation verification for play on mobile devices, according to a statement from PartyPoker.

The moves come right before the Garden State Super Series, which is Party/Borgata’s biggest online tournament series to date. The online tournament runs at the same time as the live WPT Borgata Poker Open in Atlantic City, and several online satellites for Borgata live events are also being offered.

Borgata has also announced it will take deposits and withdrawals for PartyPoker NJ through the Borgata casino cashier cages during the tournament series.

While supporters of online gambling in New Jersey have been waiting expectantly for PokerStars to begin operating in the state, some detractors have emerged who question a possible license.

Many see the company as a savior for the state’s industry, which has gotten off to a slower-than-expected start. But not everybody is happy to see PokerStars in New Jersey.

New Jersey Assemblyman Ralph Caputo, chairman of the Assembly’s Tourism, Gaming and Arts Committee, wrote a guest editorial in the Newark Star Ledger calling for a ban on PokerStars in the state.

PokerStars was initially blocked in the state due to indictments against its former management, including founder Isai Schienberg, stemming from the U.S. Department of Justice’s shutdown of illegally operating sites in the U.S. in 2011.

But the Rational Group—which operates PokerStars—has been sold to Amaya Gaming and PokerStars’ former management has left the company.

The state Division of Gaming Enforcement is now expected to approve PokerStars through Amaya, which is already licensed in the state. The site could be in play as early as October.

Caputo, however, feels that PokerStars does not deserve a pass.

“While PokerStars has a history of bad behavior—behavior that resulted in the indictment of its former chief executive officer and owner and another high-ranking executive—the state is once again debating whether the firm has a place in Atlantic City,” Caputo says. “The Division of Gaming Enforcement will make that decision without even a public hearing or virtually any transparency to the process.

“But merely changing ownership does not absolve PokerStars of its troubling past. In 2011, its leadership was accused by the Department of Justice of presiding over an ‘elaborate criminal fraud scheme’ and had to pay over $730 million to settle the claim. Now is not the time to allow PokerStars to enter the Atlantic City market—no matter how much money they promise to deliver. The immediate benefits may seem appealing, but they do not outweigh PokerStars’ checkered past.”