Is poker poised for a return to prominence? 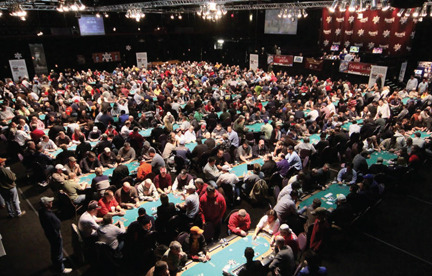 Poker has been the proverbial redheaded stepchild of the casino industry. The house collection in peer-to-peer games is incapable of generating the type of revenue the house edge in slots and table games brings in, not to mention the cost of staffing a poker room compared to a bank of slot machines.

Throughout most of its history, poker has been viewed as more of a necessary nuisance than a revenue stream. In the few casinos that even offered poker tables, poker rooms were often relegated to small, out-of-the-way corners of the casino floor, with many casinos choosing to replace them with a few rows of slot machines—an all-too-common occurrence throughout the 1990s and early 2000s.

But by the end of 2003, casino attitudes toward poker underwent a paradigm shift. A perfect storm of events occurred, culminating with the aptly named Chris Moneymaker winning the 2003 World Series of Poker Main Event, which just happened to be broadcast on ESPN with a relatively new technology called the hole-card camera. The public became enamored with the game, and the poker boom was born.

A big part of the Moneymaker narrative was the online component.

Having won his way into the $10,000 buy-in poker tournament through a $40 online satellite gave ESPN, and the poker industry writ large, the chance to sell Moneymaker’s rags-to-riches story as an everyman’s tale, not just something people with an extra $10,000 to waste on a poker tournament could achieve. Because of the online element, the public was not only introduced to the World Series of Poker, but the cost to enter wasn’t seen as prohibitive. Everyone who’d ever shuffled a deck of cards suddenly envisioned themselves as a future poker champion holding bundles of $100 bills.

Online poker had been around for five years when Moneymaker won the WSOP Main Event, but until Moneymaker, few people had any idea you could play poker, for money, online. And then suddenly, people were heading to online poker tables in droves.

It turned out to be the perfect outlet for wannabe poker players to make their dreams come true. Players no longer had to drive (or depending on where you live, fly) to a casino to play poker, or have a minimum of several hundred dollars in their wallet to sit in a game. Online poker was available to anyone with an internet connection, and allowed people to buy in for just a few dollars.

Because of its exposure, when most people are asked to conjure up an image of online gambling, the first thing that pops into their mind is online poker. This shouldn’t be too surprising.

Online poker was one of, if not the key driver of the poker boom, and as poker became a staple on TV and in pop culture, online poker sites were advertising much like the daily fantasy sports companies of today. In the mid 2000s, you couldn’t turn on the TV without coming across a poker program or seeing poker advertising, and everyone from college kids in their dorms to 9-to-5-ers in their cubicles had caught the poker bug.

But with the poker boom having come to a close, and the online gaming industry having been consolidated by dozens of mergers and acquisitions that have seen the hodgepodge of independent, privately owned online poker sites come under the umbrella of publicly traded multibillion-dollar companies that offer every form of online gaming under the sun, poker’s star is fading.

In 2016, online poker is a lot like poker in brick-and-mortar card rooms—it’s a nice little product to offer and helps bring in customers, but the real money is in the other online gambling verticals.

Even PokerStars, which had stayed true to its poker roots until it was bought by Amaya in 2014, now offers casino games, sports betting and even daily fantasy sports, and it’s these verticals that PokerStars’ new owner, Amaya, seems focused on, and for good reason.

Online poker’s resonance with the general public belies its current place in the online gaming pantheon, as it pales in comparison to the other online gaming verticals when it comes to the amount of revenue it generates.

In New Jersey, online casino revenue outpaces online poker by a 6-to-1 margin. And New Jersey isn’t an outlier.

The European online gaming market is estimated to be worth €14.3 billion, according to industry analyst Eilers and Krejcik Gaming. Online poker accounts for less than €1 billion of the market, about 6 percent. The ratio of casino revenue to poker is close to New Jersey, about 7-to-1.

Even under the best-case scenario, online poker is outpaced by all other verticals. H2 Gambling Capital reached a similar conclusion for the total European online gaming market (€14.2 billion), but their breakdowns are a bit different, and poker accounts for about 14 percent of all online gaming revenue:

In addition to being a smaller market, online poker has smaller profit margins than online casino, and now that the vast majority of poker sites are part of publicly traded multibillion-dollar entities, they have a fiduciary responsibility to their shareholders to invest capital where it will have the best returns. The result is less focus on online poker.

What makes poker such a frustrating product for casinos and online gaming operators is the game’s many limitations.

Brick-and-mortar poker rooms require a lot of space and a lot of employees to run properly. Furthermore, poker players by nature are always looking for edges, and are among a casino’s most discerning customers, constantly looking for deals and rewards, which have dried up in recent years.

Online poker may not have the same space and payroll concerns as its brick-and-mortar counterpart, but there is another aspect of the game that makes it more difficult on operators: liquidity.

Legalization and regulation efforts have permeated the online gambling industry, and while this is good from a consumer protection point of view, it’s balkanized the industry. Instead of poker sites being able draw from a global player pool, they’re now constrained by the size of the regulated market they’re operating in.

Because online casino and sports betting aren’t restricted by liquidity, these industries have had an easier time adapting to and thriving in regulated markets.

Add to this the increased overhead and operating expenses that stem from licensing and regulation in multiple locales, and it becomes impossible for poker operators to engage in the massive marketing campaigns or offer the types of incentives that attracted so many players to the game a decade ago.

One solution to regulated poker’s liquidity problem is to re-create the global market of 2005 through interstate and international agreements, such as the one New Jersey and the United Kingdom are trying to hash out.

The two locales are currently working with common operators to see if liquidity sharing is feasible and how it would be implemented, which, in the words of New Jersey Division of Gaming Director David Rebuck, would radically alter the struggling New Jersey online poker market. “With 9 million people in New Jersey, and more than 63 million in the United Kingdom, this would mean a massive increase in liquidity for New Jersey operators,” Rebuck told Global Gaming Business in June.

Agreements of this sort are the only way online poker can put the infrastructure in place, like they had in 2003, if a second perfect storm occurs. If the markets remain balkanized, a second poker boom (likely to be more of an aftershock) is unlikely.

Poker, in its traditional form, doesn’t have the same appeal it had back in the early and mid 2000s, and online poker sites are scurrying to come up with a way to make the game more appealing. For a variety of reasons, poker is no longer the millennial magnet it once was.

One reason for this, but certainly not the only one, is that the pendulum of skill vs. luck has tilted too far in the skill direction.

The internet may have brought poker to all corners of the globe, but along with the games, it also brought knowledge and advice. Because of this, the games are tougher, and upward mobility in poker has been stunted. The quality of play has improved exponentially, and filtered down into even the lowest-stakes games, which used to be fun, action-packed rollercoaster rides of all-in bets. In addition to being tougher, solid players are also boring players, and their patient, disciplined play tends to sap the fun out of poker.

This lack of fun, and how online poker companies first tried to deal with it, is a major problem, according to Scientific Games Senior Vice President Roger Snow, who recently told Bloomberg, “People say, ‘Oh, just give players a game that’s really close to no house advantage, and they’ll love it.’ They don’t.”

Snow went on to talk about the lack of fast upward mobility. “I think what players like is what I call volatility, which is very loosely the ability to win money quickly,” Snow said. “I’ve met other game inventors, and they have different philosophies. I like games that are very aggressive. If you’re behind, you can catch up, and if you’re ahead, you can press your advantage.”

Snow isn’t the only person who has come to the conclusion that volatility is important.

So, if you’re confused by the popularity of Spin & Go’s and the other fast-paced lottery-style games that have taken online poker by storm, you shouldn’t be, because these games offer the volatility Snow is talking about.

The Changing Face Of Poker

Ever since the rollout of lottery-style Sit & Go tournaments (PokerStars Spin & Go’s being the most well-known of these) these less skillful poker variants have received a tremendous amount of scorn from the professional poker community. The general consensus in the poker world is that online poker sites are moving casual poker players into other, more profitable verticals such as casino.

There is certainly some truth to this, but as already noted, companies, especially publicly traded companies, must maximize profits.

But to Snow’s point, if people have stopped participating in traditional poker games, the way to bring them into the mix is by offering them products, such as Spin & Go’s, that they’re interested in. Hopefully, these new products, that combine the skillful elements of poker with more traditional, volatile forms of gambling, will pique their interest, and lead some of them to the traditional poker tables.

The chance for a big score is how you get average players to compete against great players.

In 2003, it was the hole card camera that had people salivating to play poker, and the existence of online poker provided them with unfettered access.

In 2016, innovations such as lottery-style games (or some wholly unknown technological advancement or event) could rekindle the public’s interest in poker, but it will take further regulation in the U.S. coupled with interstate and international agreements to put the necessary framework in place to accommodate these players if a second poker boom hits.

And as Chris Grove, publisher of OnlinePokerReport.com and a partner with Narus Advisors, indicates, poker isn’t going to simply disappear from the scene.

“On a broader cultural level, the popularity of poker seems to be somewhat cyclical,” Grove says. “You could argue that the cycle is due to start swinging back around after a half-decade where poker has been relegated to something of an afterthought.

“That momentum combined with the apparent propensity for millennial gamblers to prefer games with a skill element could set the stage for a rekindling of interest in poker, although it’s likely to pale in comparison to what we saw in the mid-2000s.”