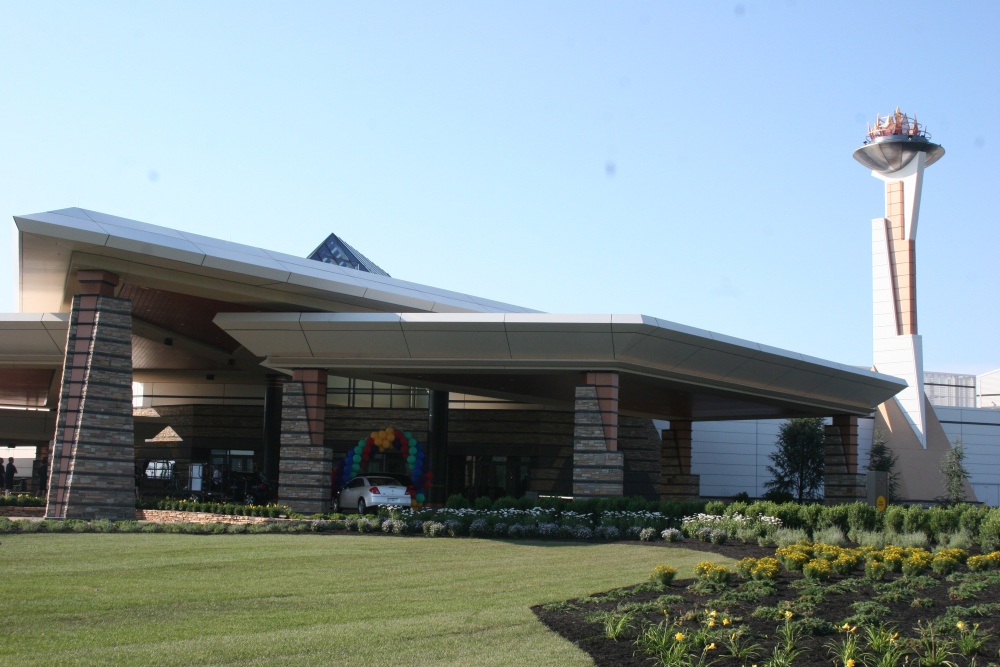 The next generation in Pennsylvania gaming opened last month in Wilkes Barre when the Mohegan Sun at Pocono Downs debuted its permanent facility. The 9 million facility includes retail, branded restaurants and the latest, state-of-the-art slots.

The racino is the Mohegan tribe’s first commercial venture outside of its tribal casino resort in Connecticut and was the first gaming facility to open in Pennsylvania with its smaller facility in the racetrack. And it’s no coincidence that there are similarities between the two facilities.

Bruce “Two Dogs” Boszum, the chairman of the Mohegan tribe, says efforts were made to incorporate the natural geography, the culture and the history of the surrounding Pocono mountains into the design of the facility, very similar to the Mohegan Sun casino resort in Connecticut.

Ironically, Wilkes Barre was settled in the late 1700s by settlers from Connecticut, a fact that has joined the operators with the community.

“We’ve gotten tremendous support from the community for what we’re doing here,” says Bobby Soper, president and CEO of Mohegan Sun. “This is just part of the renaissance that is occurring throughout this region.”

Mitchell Etess, president and CEO of the Mohegan Tribal Gaming Authority, said the high Pennsylvania tax rate limited how much the company could invest.

“We would have liked to invest twice what we did,” he says, “but it was just impossible to get a return on our investment with the level of the tax.”

Still, says Etess, he’s proud of what they’ve built for the market.

“There’s nothing like it anywhere in Pennsylvania,” he says. “We wanted to give our customers something they could not find anywhere else in this market, and we think we’ve succeeded.”

The circular casino, designed by JCJ Architects, has a similar feel to the original Mohegan casino in Connecticut, and the “journey” begins when approaching the casino. A “torchere” features a “smudge pot” at the top, a lighted simulated fire that can be seen for miles. The undulating exterior is reminiscent of the surrounding mountains, and the arrival gives visitors a sense of what the region is known for, including a sculpture that celebrates the original natural resource that attracted immigrants, coal.

The Mohegan Sun’s principal competition has been the Mount Airy Casino Resort, less than one hour away, which opened in October last year and immediately took market share from Mohegan Sun. Soper expects to regain those customers and more.

“While I can’t talk about numbers because of financial disclosure restrictions,” he says, “I’m confident that once the word gets out about what we’re offering here, there will be no reason to go anywhere else.”

One of the places Mohegan’s Pocono customers can go is Atlantic City, which offers the full casino experience. Pennsylvania casinos are still limited to only slots.

“We’re pretty confident that tables will eventually be approved,” says Soper. “We’ve got plans about how we’ll implement table games, but of course we defer to the views and opinions of the commonwealth’s regulators and legislators.”

Still, the Mohegans’ most serious competition will come online in about one year when the Sands Casino Resort in Bethlehem opens. The $350 million first phase is designed to be a multi-use development that will be less about gaming and more about the entire entertainment and leisure experience. While Mohegan Sun at Pocono Downs offers about half a dozen shops, the Sands will have dozens of upscale shops and restaurants.

Despite some complaints about the state gaming board’s procedures and decisions, Soper says he’s been consistently impressed with its professionalism.

“The commissioners and the staff of the gaming board have been nothing but supportive of our efforts here to make gaming in Pennsylvania work. And we could not have done it without them.”

Etess said the facility could become a template for other projects currently being considered by the tribal gaming authority, including a casino in Kansas and at Aqueduct racetrack, in New York City, where the company is a finalist in the slot-operator sweepstakes.

He says the high tax rates in all those jurisdictions don’t scare him away.

“When you consider the rate we pay in Connecticut, which is effectively around 20 percent, that’s higher than most commercial land-based rates in the United States,” he says. “In Pennsylvania and other states, we’ll build what the market will bear, but we’ll build a quality facility that fits the market.”