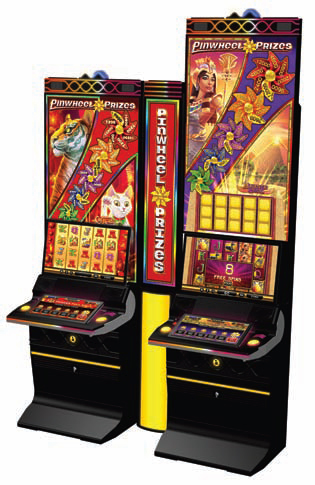 This is one of the first games on IT’s groundbreaking Prizm VXP cabinet.

The VXP stands for “vertical expansion.” The cabinet presents three screens to the player—the main 27-inch 4K touchscreen landscape monitor is augmented by the 18.5-inch button deck, the largest in the business, which doubles as an extra touchscreen monitor for use in various bonuses and game play. But sitting behind the main game screen is a giant 55-inch flat-screen 4K monitor.

The 55-inch monitor physically rises, using a commercial-grade motor to smoothly move into position for game mechanics on the entire grand display.

The free-spin round in each game triggers the VXP feature. The 55-inch monitor rises as the reels expand into a double set with 40 additional pay lines, for eight free spins. In Majestic Oasis, the free-spin round features a lock-and-spin mechanic on the top reel set. Pinwheel scatters lock in place and stay until three fill a reel to trigger a spin of the corresponding pinwheel.

Free spins can be awarded by the scatters or by landing on a Gold wedge during a Pinwheel spin. Eight free spins take place on the dual set of reels, with 40 paylines each.