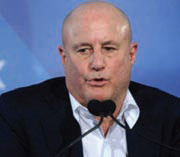 Scientific Games Corp. Chairman Ronald Perelman is continuing his drive to raise his stake in the company. Last month, Perelman spent more than $2.24 million to acquire 100,000 shares in the company, according to a filing with the U.S. Securities and Exchange Commission.

In June, Perelman spent more than $6 million to acquire slightly more than 300,000 shares in aggregate in Scientific Games.

Perelman acquired the new shares at an average price of US$22.41 per share, according to the filing. He now holds more than 39 percent of the firm’s common shares.

Scientific Games said in August that its consolidated adjusted earnings before interest, taxation, depreciation and amortization (EBITDA) fell by 1.5 percent year-on-year to $335 million in the second quarter of 2019. The company posted a net loss of $75 million in the three months to June 30, compared with a $6 million loss registered in the second quarter of last year.

In May, the company completed the initial public offering of a 17.4 percent minority interest in SciPlay Corp., raising more than $400 million. The company said it received $301 million in proceeds from the offering, which it would use to pay down net debt, which stood at about $8.8 billion at the end of the first half.