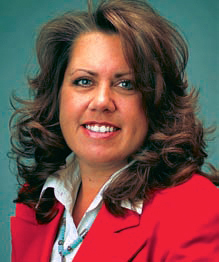 In 1862, President Abraham Lincoln bestowed a ceremonial “cane of authority” on the Pueblo of Pojoaque of northern New Mexico in acknowledgement of its sovereign status. But self-rule has not always meant self-sufficiency for the tribe. As recently as the 1980s, following centuries of displacement, disease and poverty, unemployment in the community peaked at 80 percent. With deprivation came illiteracy and addiction.

Today, all that has changed. The Pojoaque hosts two gaming halls—Cities of Gold, which opened as the state’s first Class III casino in 1995; and the $300 million Buffalo Thunder, which debuted in 2008. The Pojoaque now dominates the gaming scene in the Santa Fe-Espanola area, drawing 50 percent of all slot business; net win for the second quarter of 2013 exceeded $15 million.

Prosperity has brought stunning advantages, and also revived an old fight. Though the Pojoaque now contributes $4.5 million in annual revenue sharing to the state, along with millions in salaries and payroll taxes, New Mexico wants more. As in the past, the tribe is prepared to fight.

“The states are saying, ‘Hmm, our tax revenues are smaller and our debts have increased, so we need more of your money,’” says the tribe’s chief legal counsel Steffani Cochran, now working on compact negotiations with Pueblo Governor George Rivera. “That, sadly, is the long history of behavior from state and federal governments. We’ve been successful putting money back into our economy, so you’d like to have more. But why are we responsible for your budget holes?”

The two sides have faced off before. In 2001, then-state Attorney General Patricia Madrid sued all gaming tribes in New Mexico for failing to ante up 16 percent of net slot revenues, saying it was a violation of a 1997 compact that promised to limit gaming competition. Most tribes paid up. The Pojoaque held out until 2005, when it finally settled the case. At the bargaining table now, the state again wants increased gaming revenues in exchange for exclusivity. Cochran promises the tribe will reject the offer, especially in light of competition that now includes racinos, a state lottery and ubiquitous nonprofit gaming.

“Pojoaque has said very publicly and very clearly it will not seek exclusivity from the state of New Mexico, so they cannot justify revenue sharing,” she says. “We are competing now. And if someone thinks they can do better than we can, Governor Rivera says, ‘Bring it on.’”

On the plus side, gaming has been beneficial both for the tribe and the community at large. The Pojoaque now offers $1 million in annual scholarships to its children from kindergarten to the doctoral level. Almost 100 percent of the children now graduate from high school. With the reversal of fortune, the Indians have become local benefactors. The Pojoaque police supplement the state troopers. A tribal fire station is leased to the county for $1 a year. And the tribe has built a library and a community health center that serve more non-Indians than Indians.

Cochran is a Chickasaw who served on the National Indian Gaming Commission from 2010 to January 2013, where she “tried to bring the agency back to its roots in IGRA and make sure we get behind those policies, supporting self-sufficiency and economic development for the tribes.” She is committed to advancing the mission of the Pojoaque and all Indian tribes.

And the ongoing faceoff with New Mexico?

“Buffalo Thunder opened when the market was at its worst,” says Cochran. “The Pueblo stuck it out, got people off unemployment rolls, gave back even when the economy was tanking. We will survive.”