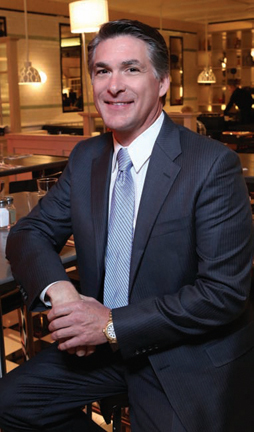 The opening of Revel in Atlantic City in April 2012 was hailed as a turning point in the history of the city by New Jersey Governor Chris Christie, whose intervention with lenders kept the project moving a year earlier.

Unfortunately, the only turn was more downward as Revel failed to meet initial projections. Before long, the project’s founder Kevin DeSanctis exited, replaced by former Mohegan Sun President Jeff Hartmann. Along with the Fine Point Group, Hartmann instituted a “Gamblers Wanted” promotion that reversed the previous course of non-emphasis of the property’s casino.

When Hartmann left in September, former Station Casinos executive Scott Kreeger was elevated to president to go along with his previous COO title. Kreeger brings with him much experience in the locals market and a marketing expertise that will come in handy in the super-heated competition in Atlantic City.

“When we came in, we tried to make the place much more aligned with what you find in a traditional casino environment,” says Kreeger. “We put more casino customers in the hotel rooms. We dialed back a little bit on the leisure travelers and the cash business, so we put gamblers in our rooms.”

To emphasize the gaming aspect of the property, Revel was given the traditional “casino hotel” tag that was absent upon opening.

Food and beverage was always an emphasis and Kreeger is a big believer in the attraction of this amenity.

“In my opinion, we have the greatest selection of restaurants I’ve ever seen in any property,” he says.

Still, the price point was off-putting to some potential customers. “We really missed in the casual, quick-serve area, and we had customers clamoring for quick and less expensive foods,” he says. “So I focused in on that right away.”

The result was Relish, a casual café that offered those kinds of foods.

“We focused on simple, local style and fun foods,” he says. “We’ve got a $4.99 burger, a $9.99 steak and shrimp special. It immediately took off. When you find those areas of compressed demands like value food items, it immediately tracks.”

So much so that Relish was moved to a new and larger location.

Revel has to appeal to everyone to be a success, according to Kreeger, and create a multi-channel property.

“I’m willing to take the 21-year-old customer and the elderly customers and every demographic and income spectrum in between,” he says. “A well-run and a well-branded property should be able to do that. You just have to be smart about the channels through which you communicate. They are all different: the slot customers, the club patron, the concert attendee, the leisure resort customer… You have to know how to reach each of those groups.”

Kreeger is also committed to appeal to the local customer as well as the destination visitor.

“You can make offers to locals that make sense,” he says. “But you can also have things for visitors that make it very appealing. As a new person to Atlantic City, we’ve been feeling our way through this. We’re doing penetration studies on a per-capita basis through the various distances. Our early traditional marketing like gift giving has been very successful, so it leads me to believe that there is an opportunity to do effective local marketing.”

Kreeger says the advantages Revel has are undeniable.

“It’s a great property,” he says. “It’s fresh and clean and right on the beach. So the branding and advertising needs to reflect that. That’s who we are.”

Kreeger credits DeSanctis for developing a very strong corporate culture at Revel, but says that the developments since opening have raised some concerns among employees.

“We just completed an employee survey that came back surprisingly positive,” he says. “But they are concerned about two things: the financial shape of the property and the strategy going forward. It’s my job to develop that strategy and to communicate it to everyone here, which is what we’re doing right now.”

Some things, says Kreeger, are out of his control.

“We want to see the city marketed as a brand,” he says. “I’m working with presidents of other properties and community organizations to accomplish that. But we need more effort in the meetings and conventions area, airlift, general branding and things of that nature. If we all work together, we can make that happen.”