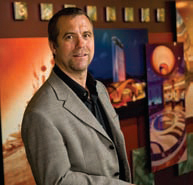 The architectural firm of Thalden Boyd Emery is often referred to as “Thalden Boyd.” The website URL is simply “Thalden.com.” Yet for many casino clients, the last name on the marquee is the most important. As president, co-owner and design director of the St. Louis-based firm—one of the largest practices of its kind in the U.S.—Rich Emery leads design and production for every project in the portfolio.

In a career that spans more than 30 years, Emery has seen the gaming industry go through cycles of boom, bust and recovery. Today, with skyrocketing competition, maturing markets and contracting revenues, he says more operators are foregoing the bigger-is-better mentality for judicious investment.

“The industry, the economy and the lending climate are demanding that we build a better widget—something faster, more efficient and less expensive,” Emery says. In many competitive markets, he adds, casinos designed by Thalden Boyd Emery “have outperformed the competition because we bring them on with the right balance of amenities and at the right price for the market.”

That approach is embodied in a property that opened last month in the greater Cincinnati area, the $175 million Miami Valley Gaming racino, developed by Churchill Downs and Delaware North. “We were tasked with doing the same size casino that the competitors were doing, but bringing it to market faster and building it for much less,” says Emery. The 186,000-square-foot contemporary facility went from groundbreaking to grand opening in about a year.

In some cases, designers act as historians, anthropologists and cultural interpreters. Case in point: the $300 million Buffalo Thunder tribal gaming hall near Santa Fe, which opened in 2008. “It was like crafting a work of art,” says Emery. “The site, the building, the interiors, every element represented the beauty of New Mexico.” At the request of the Pueblo of Pojoaque, the architects blended contemporary construction methods with ancient tribal techniques, incorporating massive viga logs and “monoliths of stone” into the design. Tucked into the foothills of the Sangre de Cristo Mountains, the casino with the adobe façade looks right at home in the desert landscape.

With iGaming now a reality and more patrons playing on handheld devices, the casino industry faces more years of tumult and adjustment, says Emery. “We’re seeing it now; everyone is trying to capture that new frontier in gaming. When people are no longer tied to big machines, casinos will take on a whole new appearance and the architecture will have to adapt. But my prediction is people will still come to the casino because of the attractions, the excitement and the fun.”

The days of “build it and they will come” are over, he adds. “We have to focus the money where it has the most effectiveness, and build reasonably priced facilities that also have impact and dazzle the customer.”

Emery’s gift for design was less acquired than inherent. In kindergarten, as his classmates scrawled stick figures, he created intricate 3-D structural renderings. “I told my mom I couldn’t believe the other kids drew things flat. From very early on I knew I wanted to be an architect.”

He doesn’t mind if people sometimes forget his name. “I tend to be in the war room with our amazing design team and not out in the world,” he says. “I don’t have to get the credit. I just love what I do.”