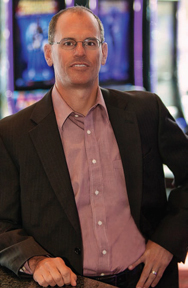 If his official title is a mouthful, it’s because his range of responsibilities has just grown significantly.

Derik Mooberry has been an executive of Bally Technologies for 12 years, and that means he has taken part in the supplier’s transformation from a struggling slot manufacturer into a diverse supplier of technology and innovation in just about every facet of the delivery of games to casinos.

Beginning in systems sales, Mooberry was part of the boom that solidified Bally’s position as the top systems company in the business. His responsibilities gradually evolved to oversight of all game and system development and, with the completion last month of the acquisition of SHFL entertainment, of proprietary table games—all of it on both brick-and-mortar and online channels from casinos to PCs to mobile phones and tablets.

“I’ve really had the pleasure of watching Bally grow over 12 years, and I’ve been able to grow along with it,” says Mooberry.

That growth is really just beginning. As senior VP in charge of both slot and table games as well as the new move into interactive products, Mooberry will continue his role of guiding products from the idea phase to implementation by customers.

“I have end-to-end responsibility for design, building and placement of our games in various marketplaces,” he explains. “That includes hardware engineering, software engineering, regulatory compliance, product management—everything in terms of getting the products ready for sale.”

The addition of development staff from SHFL entertainment—including game design whiz Roger Snow, among others—adds to a game design studio system that has been growing for years, with more than 30 game development studios located around the world.

“Building games for us is truly global, as are the marketplaces we sell our games in,” Mooberry says. “Those studios will likely continue to expand. We’re always looking for new game development talent. As a growing company, it seems we’re always in a recruitment mode, which is a fantastic position to be in.”

Bally’s mix of talent includes more than simply seasoned gaming industry veterans. “Some of our most creative people who work in our various game development teams came to Bally with basically no understanding of the gaming environment,” Mooberry says. “They may have had background in graphics or animation and may even have come from the video game industry, or other areas outside of that. We’ve had employees form Disney and other major companies join Bally and become fantastic game developers.”

As Bally moves forward, that talent is in charge of pushing the technological envelope more than ever. Part of Mooberry’s job is to identify market needs for specific Bally products and to, in the end, make them happen. In the iGaming space, that has meant not only the development of Bally’s iGaming platform, but the effective transfer of Bally content to online channels. “If you look at the early games we’ve been deploying in the real-money wagering space and intend to deploy in the mobile space, they are existing Bally games that have been some of our most successful titles in the traditional brick-and mortar environment,” he says.

“We look to capitalize on that brand recognition, and on the efforts we’ve expended in building those games for the land-based environment, and take them into other channels.”

For the coming year, those efforts will apply not only to the traditional Bally slot games, but to SHFL table-game entries like Let It Ride, Caribbean Stud and 3 Card Poker.

On the brick-and-mortar side, Mooberry will continue to work closely with Bryan Kelly and his “Innovation Lab,” which searches the larger world of technology for new play mechanics and other features that can be applied to Bally slots. “Bryan’s team thinks of innovative ideas that can be industry-changing, which are 24 months out and further,” he says. “We then carefully determine which of the many ideas to commercialize.”

Many of those ideas—the iDeck, the Pro Curve cabinet—have already become part of the Bally product lineup.

For 2014, Mooberry predicts the biggest news will be the rollout of the Pro Wave cabinet, which employs a 40-inch concave screen that can handle content from any other Bally setup, including the popular V32 portrait-style cabinet. Mooberry calls the new cabinet a hybrid between an upright and a slant-top, because it offers the real estate for game features of a large upright in a format that can be easily viewed from a seated position.

It’s just one more innovation that Mooberry has brought from concept to market. And it certainly won’t be the last. For Mooberry, that’s a by-product of what he calls the best supplier team in the business. “It’s the people that make Bally great,” he says, “and it’s been a great run for me.”

It’s a run that shows no signs of slowing.