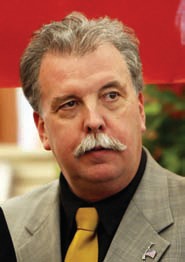 Pennsylvania may be the second-largest U.S. market for casino gaming, but a new bill to allow online poker in the state recognizes that when it comes to online games, the more players the better.

The bill was introduced by state Rep. John Payne and is seen as the first serious attempt by the state to legalize online gambling. The bill has been submitted to the Pennsylvania House Gaming Oversight Committee.

The bill speaks primarily to online poker, but could allow for other types of online casino games.

Proponents of online gaming in the U.S. immediately noticed the bill’s provisions for allowing interstate player sharing, which is seen as vital if online poker is going to grow as an industry.

Neighboring New Jersey, for example, has had online gaming for more than a year, but online poker play has only been successful at four sites, as opposed to casino games and slots, which have thrived at several sites.

Nevada and Delaware—the other two states allowing online play—have already signed a pact to combine player pools. Both states have small populations and have only seen limited play. Their agreement is expected to go into effect in the next month.

The Pennsylvania bill also gained attention for not including a “bad actor” clause. That could help PokerStars finally get a foothold in the U.S.

Other aspects of the bill include:

• licensing exclusive to companies already licensed by the state;

• a licensing fee of $5 million per license; and,

• limits on deposits and losses, along with tough determents against underage or problem gamblers and criminal activity.