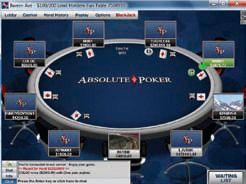 Costa Rican authorities last month raided the offices of Pokerstars, Absolute Poker and Ultimate Bet in an attempt to apprehend the fugitive owners of those sites. Members of the nation’s Organismo de Investigaciones Judiciale sent workers home while they searched for the fugitives.

PokerStars, however, said the target of the raid was not the owners. In a release, the company said, “Costa Rican officials today visited PokerStars’ customer service center in Costa Rica in order to review the operations. We cooperated fully with the officials and following their review, the customer service center was reopened with the approval of the local authorities.”

At Blanca Games, the parent company of Absolute Poker, things were a little more serious. Television news coverage showed computers and records being carted away. And the company said it is “liquidating” its workforce as it turns its attention to non-U.S. business.

A previous report by MSNBC that Absolute Poker and its subsidiary Ultimate Bet would declare bankruptcy soon appeared to be happening, despite denials from the company. MSNBC reported that a lawyer for Blanca Gaming sent an email to shareholders that said it would file in Norway.

“Most importantly, Blanca Gaming has provided notice that it is currently unable to make any payments toward its debt obligations,” Madeira Fjord said in the message. “Additionally, Blanca has further advised that there will be no future payments.”

Absolute Poker and two of its founders—Scott Tom and Brent Beckley—were named in the indictments handed down on April 15. Both are still at large.

Blanca issued a press release denying that it planned to enter bankruptcy, but confirming that it was restructuring non-U.S. operations.

“This decision comes after considerable review and analysis of the impact that ‘Black Friday’ has had on the business as a whole,” the statement said. “The workforce has been liquidated, and the process of rehiring approximately 20 percent of staff in key positions has commenced. All affected employees have been informed of this necessary restructure.”

In May, Absolute Poker reached an agreement with the Justice Department to return funds to U.S. players. The funds were reportedly being held by a third party, which would facilitate the return of those funds. However, Absolute Poker says that there are still “several legal issues” to resolve before funds can be released.

In April, the DOJ made a deal with PokerStars to return its domain name as long as the company used the reactivation to return the funds of U.S. players who requested them. The same deal was offered to Full Tilt and Absolute, but no agreement was finalized. Full Tilt issued another statement about the status of points and tournaments, but has yet to set up a procedure to return the funds of U.S. players. The company said the return of U.S. funds would be further delayed.

Because of the uncertainty about the four sites, international players have reportedly begun demanding the return of their funds. Except for PokerStars, refunds have not been forthcoming from the sites.

Meanwhile, PokerStars has begun to allow American players to withdraw their funds previously deposited with the poker giant. The return of the funds was a condition the government set when allowing the company to reopen its dot-com website.