Community gaming brings players together with a common goal—winning 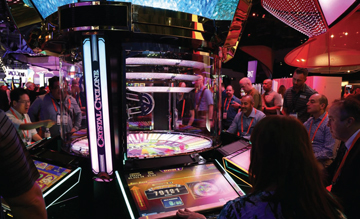 Sparks ignite from varied sources, like multi-player slots encouraging team competition. Or when bonus rounds and screens on mammoth-sized games like Batman Slots let customers race through Gotham City together.

It’s a party, a blast, and a casino wild card. Consumers want results that resonate on more than a TITO ticket or new bank balance. They want to feel it, celebrate, unleash high-fives and victory yells.

Operators embrace the magic. No numbers crunch, ROI formula or reward-tier analysis can forecast the impact of shared gaming events. Yet, there is an expectation of good social-gaming results, based either on previous years or the flood of new products raising the bar.

Players may proclaim “We Are The Champions,” in the midst of excitement, while operators gain a financial and loyalty prize, when gamblers return. They can indeed pitch players to get away to it all.

The Las Vegas outfit has long enjoyed a multi-station niche in the community gaming sector. Its social footprint began in 2013 with the Titan 360, featuring six to eight individual slot station configurations surrounding an enormous, nearly 12-foot-tall central bonusing unit. Players work toward the center progressive, and when it triggers, the gigantic circular ring rotates to face the winning player. A big metal ball spins around the wheel into a random prize slot before a captive audience.

Fast-forward to G2E 2016, when Konami introduced the follow-up Crystal Cyclone. This game also gives players their own slot station, and multiple participants can be entered to compete in the same bonus round. Crystal Cyclone’s bonus feature includes a colorfully glowing roulette-style wheel that shoots as many as 60 balls into the ring.

Fortune Cup, the horse-racing game, brings the Sport of Kings to the lineup. Its mechanical track allows horse figures to move side-to-side and change direction on the course. Their actions are mirrored through LCD displays with pristine digital demonstration of the game as it occurs. Casinos have the flexibility to connect satellite terminals and displays for an arena participation environment. The products will be released this year, amid high expectations.

“Crystal Cyclone and Fortune Cup each exemplify the development and engineering expertise we have available with our parent company (Konami Holdings) in Japan,” says Steve Walther, senior director of marketing and product management for Konami Gaming. “Crystal Cyclone is most similar to Titan 360—comprised of personal video slot stations that interact through a central mechanical bonusing experience. Fortune Cup is a multi-station horse racing concept that uses realistic mechanical detail and powerful digital interaction through LCD software displays. Fortune Cup also carries an innate element of instant social gratification with each win as the horses cross the finish line and top awards tally up.”

Walther says community gaming has largely evolved from linked progressives—jackpot bonuses that span multiple machines and allow players to simultaneously contribute and potentially trigger a central tier of metered jackpots. Demand continues to grow, he asserts. Patrons are not only in the game, they are the game.

“Whether it’s online, mobile, console or on-site gaming, there is a big consumer demographic that is hungry for games that include smart elements of social interaction,” Walther indicates. “That’s what we’re aiming to cultivate with our next-generation product—spanning multi-station and skill-based machines. We debuted a skill-based game at G2E last fall called Beat Square, similar to Konami’s Dance Dance Revolution. It challenges players to compete in hitting a lighted game pad in a rhythmic series, with a modification that the music pad exists as a hand-tap dashboard. This game has a clear social connection by putting top players in the spotlight and allowing them to compete.”

Las Vegas-based AGS, with roots in the Class II Native American market, continues expanding slot games for the Class III commercial marketplace. The core of its operation, one could say, is power to the people. Prolific games like Colossal Diamonds and Bonus Spin fare well, socially and financially, according to Andrew Burke, the vice president of slot products for AGS.

“Large-format slots—like our Colossal Diamonds game on Big Red (as the super-sized red cabinet is known)—have become a type of community gaming,” Burke says. “Their bench seats draw multiple people into the game—like couples or friends—where they enjoy the game play together. Their size and the excitement they create draw big crowds around them, an attraction itself. Customers have sent us videos of the crowds that form around Big Red. It’s incredible to see the community feeling that’s created.”

And now, in the words of the late American actor and casino pitch man Telly Savalas, it’s bonus time, baby.

“Slot operators have used bonus wheels for decades to entice play and create more excitement on the slot floor,” Burke says. “Unfortunately, their table game-focused counterparts have never had a similar option for their pits, and have been left to watch the advancements of these slot wheels and the revenue they bring in with a fair amount of envy. But now, with Bonus Spin technology—in a white-label, fully customizable format—table game operators can leverage the thrill, anticipation and sense of community that bonus prize wheels add to the table game experience.

“By adding Bonus Spin to any of their table games in the pit, operators can instantly be more effective at marketing their games by offering customizable prizes that target specific player segments, resulting in more player excitement, interaction, and a potential increase in revenues and visits.”

Bonus Spin is a customizable, digital prize wheel that connects to a blackjack table or any other table game, including poker derivatives. It offers players a spin on the wheel for hitting a specific hand. Casinos can choose what to offer on the wheel—including anything from a progressive top prize to a fixed top prize, or an experience-based prize as the top award, allowing each operator the ability to target their preferred player segments.

Casinos can customize the virtual wheel to award property-specific prizes like a weekend stay in their finest suite, VIP bottle service, a cabana at the day club, event tickets, or a night of fine dining at their hottest restaurant.

“This first-of-its-kind progressive table game technology is sure to catapult table games into new revenue arenas with its interactivity, customizable features, and ease of play and operation like no other product before it,” says John Hemberger, senior vice president, table products for AGS. Nearly 100 new Bonus Spin installs are scheduled to go live in the first quarter of 2017, he says.

Operators can easily add Bonus Spin to their existing table games. Consisting of an optional side bet, it enables players to simply bet on the Bonus Spin along with their standard wager. If they receive one of the hands that trigger the chance to spin—such as a 21 if they are playing blackjack—they can hit the Bonus Spin button that automatically triggers a random spin on the bonus wheel.

“The concept is changing into more of a shared gaming experience allowing multiple players to participate in the same game at the same time,” says Greg Colella, the company’s vice president of product marketing, gaming. “Previous products tried to share a common bonus pool with players that left many players feeling disappointed.”

Into that space goes the Prizm Game Table. It offers a revolutionary gaming experience across slot and electronic table game content, Colella says. The award-winning innovation was a hit at G2E 2016.

“With four individual player stations, a stunning 65-inch 4K community display, and the power of Scientific Games’ CPU4X, the Prizm Game Table offers compelling hardware and titles like Lightning Launch Roulette, all of which will attract table game and slot players alike,” Colella asserts. “By featuring an integrated discreet player sound system and integrated lighting, it is the ultimate social gaming table. Coupled with its optional overhead sign packages, this new platform supports the versatility of being a featured game on a casino floor, as well as an exciting addition to a gaming lounge or bar area. This platform will help evolve the way people think about community gaming.”

Colella says the fact that Prizm is set up as four player positions, each with bill validator, ticketing and player tracking, allows operators to place this product as easily as any slot machine, and then provide a unique player experience. The 65-inch display is a headline-grabber, he says. It draws players to sit down and experience the product in an environment where they can interact with other players.

The product has been well-received.

It is the only company to win two awards at the prestigious event, sponsored by GGB and judged by a panel of accomplished industry experts.

“These top honors for Best Slot Game and Best Table Game Product or Innovation are a tribute to our talented innovation teams across the globe,” says Derik Mooberry, Scientific Games’ group chief executive, gaming. “Both Space Invaders and the Prizm Game Table reflect our unwavering commitment to develop industry-altering firsts for our customers, helping to drive casino revenue and create exciting and engaging new experiences for players.”

The company has taken a plethora of new steps to embrace community gaming. One of them indicates a “reel” love for this dynamic. It’s the Reel Championship line, software that enables competition and tournaments on a significant number of Novomatic machines.

“We offer several lead products in North America, including Reel Championship line, which goes a step beyond the standard slot tournaments in the market,” says Rick Meitzler, president and CEO of Novomatic Americas. “Customers enjoy the competition aspect, and with targeted marketing initiatives, it broadens the demographic reach of the bricks-and-mortar experience.

“We have taken that aspect and are in the process of also creating (in partnership with Greentube) a Reel Championship social site, which is a constantly evolving opportunity for customers to play in a competition any time, engage with our customer’s brand and qualify for different promotional offers and jurisdictionally approved prizes based on competition outcomes. It’s all competitions, all of the time.”

Novomatic’s new progressives, including the Jackpot Edition, will have a revenue-generating impact on the North American Market, Meitzler asserts. So will its relatively new Novo Unity Community Roulette in Gatineau, Quebec, Canada, at Casino du Lac-Leamy. This product enables groups to play in a party ambiance, absorb the game energy and see the outcome displayed on giant screens. It’s a social, immersive gaming experience.

While community gaming was launched as a brick-and-mortar phenomenon, its concept has evolved into a shared realm with online play, according to Kathleen McLaughlin, the marketing head of Novomatic Americas. The company has converted customer preference into a multi-faceted product line, influenced both by customer preference and jurisdictional rules.

“Our casino customers helped create our Reel Championship site,” McLaughlin indicates. “Every casino we spoke with was looking for a way to drive guests in a more hip and social way. We took their feedback and are using that to create value-added tools that will allow them to have a customizable differentiator provided both in bricks and mortar and online.”

The industry remains full of nuance, with implications. McLaughlin says regulations restrict and slow innovation in the brick-and-mortar setting, but tribal gaming has more flexibility and can react faster with marketing and development innovations.

Class II indeed has its privileges. And companies are ready to serve the sector.

While regs affect how quickly products come to market, one belief resonates in this area. Gaming is about more than numbers. It’s the look and feel of victory, for a live audience.