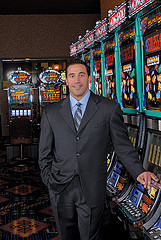 Former Palms Casino Resort President Paul Pusateri has vacated the top spot less than two years after joining the Las Vegas property. His departure comes on the heels of an ownership change that leaves the founding Maloof family with a 2 percent stake in the property, and Leonard Green & Partners LP and TPG Capital with 49 percent each.

“Paul has made a great contribution to the Palms Casino Resort in these challenging economic times,” said Palms Chairman George Maloof in a statement. “We wish him continued success.”

Pusateri has been replaced by Joseph A. Magliarditi (l.), who will oversee all hotel and casino operations for the 1,300-room resort, a popular spot for celebrities.

He resigned from the Hard Rock Hotel in March after less than a year.