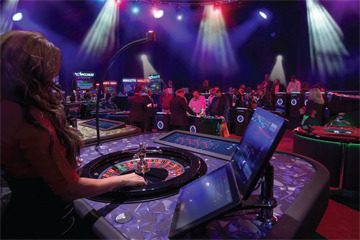 In a gaming-industry heartbeat, ETGs are the EKG.

They have baptized the emerging ETG niche by launching a string of worldwide deals for stadium setups—ETGs that typically use live dealers and beam games to individual play terminals set up in a stadium configuration. This market area, long considered an expansion target, has begun reaping rewards.

“Recent data confirms that not only are new carded players more likely to use ETGs than almost anything else on the casino floor, but existing slot players and table-game players are spending incrementally more on ETGs.

“Stadiums attract core gamblers who enjoy playing their favorite table games from the comfort of their own play station,” Stanton adds. “They marry the concept of a live dealer with the security and privacy of a stand-alone gaming device. This gives players the feel of a live table, but without the high minimum bets or the worry of being watched by five other players with a stake in the same hand.”

Electronic table games also lure the millennial set accustomed to multi-tasking and consuming digital entertainment. Players can use bill validators and TITO technology, checking in and out of games as if working a self-service checkout counter. They are tech-savvy. They are not only at the game, but in the game.

Interblock unfurled a stadium display to highlight its latest G2E presence. One of its major products is Pulse Arena, which boosts a stadium environment into an immersive, multi-sensory gaming experience. It allows operators to change the atmosphere to attract any player segment. The operator can offer a club-like environment, core gaming experience, or an educational mode for beginners.

The company recently announced partnerships with some of the world’s largest casino groups on both stadium and Pulse Arena deployment. Some are already operational. The ETG deals include SkyCity, Auckland, which will bring a Diamond Stadium with 67 play stations to its casino floor; Seneca Niagara, which will install a 39-seat Pulse Arena; and Hit Group’s Perla Casino in Slovenia, set to have a 45-seat Pulse Arena.

Interblock has a varied approach to stadium deployment.

“With our Diamond play stations, players can play up to four games at once, at their own pace, on one play station,” Stanton says. “With a dealer-assisted stadium, you have a live dealer in the middle of the stadium who can be seen on video at each play station, orchestrating the play and helping to maintain the excitement.

“Mirroring the benefit to the casino, pace of game is also a reason that players prefer stadium-style play in comparison to a traditional table game. The games are played at a faster rate, as the player is making all decisions and payments electronically. When players are ready to leave the table, they simply hit a button and grab their voucher, without needing to wait.”

Seneca Niagara recently launched the Pulse Arena, displaying what could be considered a custom-made fit.

“Each Pulse Arena is customized to meet the needs of a specific casino’s floor,” Stanton says. “We take into consideration variables including player demographics, size and the casino’s overall needs to create a stadium-style solution designed specifically for that casino. With this product, operators can select different game-enhancing themes to attract any player segment, whether it’s a dynamic vibe, VIP gaming experiences, or even an educational mode for beginning players—by simply pressing a button. Doing this changes the lights, volume and music in seconds, which allows casinos to target their demographic by the time of the week, to celebrate holidays, or by running your live shows.”

StarBar is an innovative play station accessible directly from the bar’s counter, Stanton says. It maximizes casino space and fits stylishly into any bar area. StarBar allows guests to play up to four games simultaneously. With its own internal random number generator, it can be configured as a stand-alone machine, can be connected to any Interblock live video, automated with dealer interaction or automated game generator, or can be a combination of both options.

“StarBar can stand alone or be connected to Interblock generators located on different areas of the casino floor and linked to any Interblock stadium,” Stanton says.

By early November, when Americans were voting for a president, Scientific Games believed it had passed its own referendum.

“The reaction has been very positive,” says Gabe Baron, general manager and senior director of electronic table system products for Scientific Games. “Players are finding it exciting to begin with a shared starting hand, and then make their own decisions without affecting the results of those around them. The installation areas themselves are lively, too.

“The best example of that is the effect of a dealt winner, like a blackjack, to all patrons simultaneously. This provides a similar effect to rolling the point at a craps table, when everyone gets excited and celebrates together. We’ve also seen players wager on the other connected games concurrently, by using the tabs available on the Fusion Hybrid player terminal. Players can make their Stadium Blackjack decisions at the same time they’re playing roulette, baccarat, or even another Stadium Blackjack hand, all from one seat.”

The Fusion Hybrid is a terminal-based system that connects players to live baccarat, roulette and sic bo games, as well as the new Stadium Blackjack title. Fusion Hybrid is suitable for both stadium-style and smaller environment configurations, Baron says. The system enables modular, configurable floor layout options and comes with a variety of exciting terminal lighting color options, as well as cameras at each live table display and player touch-screen interfaces. Betting timers are configurable for each of up to four games of concurrent play.

Gamblers at Mohegan Sun can play two Stadium Blackjack games as well as roulette and baccarat on the Fusion Hybrid system on one of 61 seats. Mohegan’s 119,000-square-foot Casino of the Sky houses the two Stadium Blackjack podiums surrounded by a 41-seat, stadium-configured setup. The remaining 20 seats are centered on two podiums inside the 180,000-square-foot Casino of the Earth, and feature roulette and Dragon Bonus Baccarat. All four games can be played concurrently and on any of the terminals.

“Stadium Blackjack on the Fusion Hybrid system really hits the nail on the head, when it comes to the low-limit blackjack niche,” Baron asserts. “A casino can deal a hand to any number of players with just one dealer, and realistically achieve a hand per minute or more, while offering $5 minimum games. Stadium Blackjack also carries another advantage, because it offers the Shuffle Master suite of blackjack side bets simultaneously.

“Players can choose their favorite wagers or bet them all on every hand. With the two most popular side bet offerings in North America (Royal Match 21 and Bet the Set 21), in addition to King’s Bounty, there’s something for everyone,” Baron adds. “I’d be remiss if I didn’t mention everyone’s favorite buzzword, ‘millennials,’ but I’ll do that in a way you may not assume. Stadium Blackjack is definitely not just a low-limit millennial title, but instead has found a strong following from a wide variety of ages and genders in the early research we’ve conducted. That data is reassuring that we’re doing something right.”

Baron says that from the Fusion Hybrid product angle, the excitement centers on the ability of players to wager concurrently on multiple games. From the Stadium Blackjack perspective, the strength lies in tying together groups of people with a common title like blackjack, and then presenting it in a way that is novel to the audience. That could mean shared starting cards and just a dealer’s up card, followed by the dealing of all subsequent cards to a community location where their destinations vary depending on each player’s decision.

“The strong reaction we’ve had already lends itself to future stadium titles we can leverage from the Shuffle Master library to bring fresh content to our customers and their players,” Baron says. “At G2E, we showed for the first time Stadium Casino War, where players can bet on up to seven hands of Casino War at once, rather than just receiving a single card.”

Synergy continues to benefit Scientific Games. Its recent purchase of DEQ provides access to a library of table games, table progressives and bonusing systems. The move would figure to work in concert with the stadium concept.

Holy Cow. Is that the look of Macau? In Pennsylvania?

IGT performed an impressive two-step in 2016. The company enhanced its commitment to electronic table games with one deal and unfurled America’s largest EGT stadium in the next.

The multi-layered global-gaming company completed the largest EGT installation in the United States at the Sands in Bethlehem, Pennsylvania a few months after entering a patent assignment agreement with Hong Kong-based Paradise Entertainment. That deal, announced in April, provides IGT with exclusive rights to Paradise Entertainment’s table game intellectual property for the development, manufacturing and distribution of live-dealer and random number generator electronic table games worldwide, except in Macau.

In July, IGT quickly become a major ETG player. It unfurled a gaming stadium with a rollout of 150 Dynasty ETG cabinets at the Sands. That stadium consumes a sprawling, 5,900-square-foot area of the casino floor and is comprised of 150 of IGT’s Dynasty ETG cabinets and four live-dealing tables with eight outcomes. The new terminals are expected to entice younger, less experienced players attracted to their $5-per-hand minimum. The terminals will offer blackjack, baccarat, roulette and sic bo on the same machine. A fast player can handle multiple games at once.

It will be interesting to see how the enormous popularity of ETGs in Macau will extend west, primarily in Canada and the United States. IGT, based in London, commands a huge presence in the gaming, lottery and interactive space.

“We were reminded of the enormous global potential of the ETG segment on the day that we announced IGT’s deal with Sands Bethlehem,” says Nick Khin, IGT senior vice president of sales, North America gaming and interactive. “Our customers from all parts of the world express interest in our ETG portfolio and wanted to explore how our products could be leveraged to engage new audiences and capture the attention of loyal baccarat and roulette players.”

The Dynasty ETG cabinets are programmable, enabling players to choose from two different languages and seamlessly opt in and opt out of game play without disrupting the experiences of surrounding players. From the operator perspective, ETGs can streamline efficiencies and offer greater game security, as players utilize a bill validator and TITO technology when entering and exiting a game.

“Each operator has a unique vision for their ETG destination and a different motivation for bringing live ETGs to their casino floor,” Khin says. “Our Dynasty product is versatile—it can be leveraged to create a high-energy, party-type vibe, or a more serious, high-velocity gambling environment similar to what you might see in Macau—and every type of environment in between.”

The Sands in Bethlehem hired additional workers and braced for an earnings spike from a well-populated Asian gambling market. The move showed that automation does not have to mean elimination, regarding jobs.

At G2E, IGT demonstrated a card-dealing robot amid its ETG portfolio. It figures to bet heavily on the future of this market segment.

Major gaming powers have reached a consensus on electronic table games. Stadiums help them dramatize the validation of this ever-increasing revenue niche. The stadiums are a link to millennials. And each industry powerhouse has its own way to play “Take Me Out to the Ballgame.”