The third time could be the charm for Crown Resorts honcho 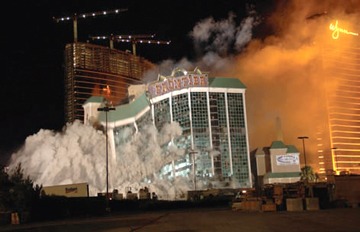 Packer bought a piece of a loan backed by land once occupied by the New Frontier Hotel & Casino. He is negotiating a potential deal with other creditors including investment firm Oaktree Capital Group LLC.

Packer has acquired a controlling interest in the nearly 35-acre site. He plans to form a company to build a hotel-casino on the land in partnership with former Wynn Las Vegas President Andrew Pascal. AFP News Service reported Packer paid $260 million for his interest in the parcel.

It’s a sign of faith in the Las Vegas recovery that Packer’s back. By some estimates, he lost $2.6 billion in his previous attempts to enter the market. In 2007, Packer’s company canceled plans to build Crown Las Vegas, then planned for the Strip between the Sahara and Riviera. The Federal Aviation Administration nixed plans for a 1,888-foot hotel tower, which would have been the tallest building in the Western Hemisphere, the Review-Journal reported.

And in 2009, Crown ditched a deal to buy Cannery Casino Resorts for $1.8 billion. Crown paid a breakup fee and other penalties totaling $320 million.

Most recently, Packer was named as a possible buyer of the Cosmopolitan Las Vegas. The property was later sold to a subsidiary of the Blackstone Group, a multinational private equity investment firm, for $1.73 billion.

“While we fell short in past attempts to enter that market, we now have the ideal opportunity with a great local partner in Andrew, a leading financial investor in Oaktree, and the perfect piece of property,” Packer said. “You can’t be in the gaming industry and not have a special reverence for Las Vegas—that’s where it all began.”