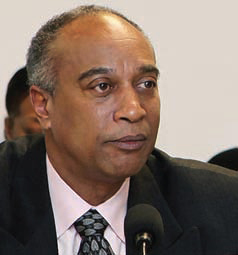 The march toward iGaming continued in several states in the U.S. last month.

West Virginia has become the eighth state to introduce online gambling legislation this year, but one that was considered a possibility has been backed down.

The West Virginia bill would “authorize internet gaming managed and licensed through existing authorized gaming facilities” in the state. The state Lottery Commission would regulate the online sites.

According to the bill, “Developments in technology and recent legal decisions have created an opportunity to legalize interactive poker as a means to further enhance and complement the benefits delivered by casino gaming and licensed facilities to or for the benefit of the communities in which they operate.”

In New York, hopes are dimming that the regulation of online poker will be fast-tracked through the state legislature, says one of the industry’s principal backers in Albany.

Assemblyman Gary Pretlow (l.), whose legalization bill appears to be stalled in the lower house, told internet news site Online Poker Report that assembly leaders are not convinced poker in its web iteration offers enough of a skill component to evade the state’s requirement that any expansion of gambling beyond lotteries, horse racing and casinos must be approved by constitutional amendment.

“It won’t be in the final budget, I don’t believe, because there are people opposed to it who are higher than me and don’t want it in the budget,” Pretlow said. “They want to do it separately and want to look at it more fully.”

In Massachusetts, an ad hoc commission tasked by the legislature with recommending an omnibus bill that would encompass all possible forms of online gaming except the lottery is close to releasing its findings. It has been studying the issue since last year.

The commission was created last year after the issue of daily fantasy sports (DFS) rose to prominence. Lawmakers legalized and assigned regulations to DFS on a temporary basis, but part of the bill created the commission, which has until this summer to make its report. The nine-member commission includes legislators, industry experts and appointees from the governor, attorney general and gaming commission. It has conducted several hearings.

The Massachusetts Gaming Commission, whose chairman Stephen Crosby serves on the legislative commission, has said repeatedly that legalizing online gaming would help the Bay State to regulate and tax existing websites and burnish the state’s reputation as a technology leader.

He recently told lawmakers that online gambling technology “could become another modest but real economic engine.” He added, “Whether online gaming will come to dominate the overall gaming industry remains to be seen, but it’s certainly a significant part of the industry. It’s already here.”

And finally, California seems ready to disappoint again. A bill legalizing iPoker has run into several obstacles. California Nations Indian Gaming Association Chairman Steve Stallings puts the chances of a successful bill coming out of the legislature at less than 50-50.

An effort that seemed full speed ahead a few years ago appears to have run out of steam. In part, the reason is that PokerStars, the largest poker website in the world, has turned its attention elsewhere.

PokerStars has been part of a coalition that included several gaming tribes, including the Morongo Band and the San Manuel Band, plus the Hawaiian Gardens Casino, Commerce Casino and Bicycle Casino card clubs. Because of PokerStars’ brush with the U.S. Justice Department over its alleged violations of U.S. law, several other gaming tribes have strenuously opposed it being allowed to participate in California online gaming.

They believed that when PokerStars allowed U.S. citizens to play on its offshore sites that it built up a customer list that would be very hard for newcomers to compete against. This would create an uneven playing field from the get-go, they argue.

This year PokerStars saw one of its allies, the Bicycle, badly wounded when state and federal law enforcement shut it down for a day due to an investigation of money laundering at the casino. This can’t help but taint PokerStars’ efforts.