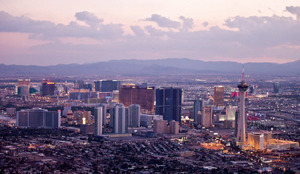 After years of one “R” word, it seems that Las Vegas is slowly embracing another. Recession has given way to recovery, and it seems that the casino industry is at last rebounding from its recent woes. But this comeback is substantially different from earlier ones, which may hold some clues for the future.

This isn’t the first time Las Vegas has taken it on the chin only to get off the canvas. In fact, a cursory look at how Vegas battled back might even lead to optimism for the next few years.

For example, in 1991 and 1992, the Strip suffered through economic headwinds that slowed the growth of revenues to a mere 3 percent—a far cry from the 11 percent growth rate it had enjoyed a few years earlier. But, with plenty of growth already in the pipeline (MGM Grand, Luxor and Treasure Island were all building toward 1993 openings), the city was ready for a comeback. And it didn’t disappoint. In fact, its success helped solidify the “build it and they will come” myth.

As the recession faded into the distance, the tremendous boom that followed hid it from view. By the time the next major economic crisis impacted Las Vegas, few could remember (it seems) that, less than a decade before, the city had suffered a definite—though not lengthy—downturn.

That crisis—the post-9/11 crash—was, on the surface, the result of an act of terrorism that briefly halted all American air traffic and shocked the world economy. But in Nevada, 9/11 was one of only three factors that led to a slowdown. In addition to that sudden disruption, the dot-com bubble had already burst, drying up some of the city’s most lucrative meetings business and putting a generation of free-spending, newly rich high rollers out to pasture. Also, California tribes had begun operating fully legal Class III casinos, siphoning off potential gamblers from Nevada’s largest market.

The 2001-2002 falloff was severe enough that operators instituted major layoffs. From 2001 to 2002, Strip casinos shed nearly 6,000 workers, more than 6 percent of their total workforce. Some operators halted expansion projects. But the gloom lifted quickly; by 2003, Strip gaming win surpassed its 2001 total, and the next four years would bring boosts in both supply and demand.

Expansions at Mandalay Bay, the Bellagio, Caesars Palace and the Venetian increased the number of rooms, as did the opening of Wynn Las Vegas, which, to Steve Wynn’s credit, started construction during the worst of the downturn.

The Las Vegas that emerged in 2004, though, was different from the Las Vegas of 2000, with a far greater focus on the high end, a focus amplified after the opening of Wynn Las Vegas in 2005. Much of the new supply huddled towards the upper end of the market.

As, over the next three years, ADRs and REVPAR soared, it made sense to think that this was the wave of the future: having stared down a global economic meltdown and new competition in its largest feeder market, it seemed that the Strip was on a roll. Smart executives imploded the Stardust and Frontier to make way for newer, larger, higher-price-point casinos, and CityCenter looked to marry the tourist boom with Las Vegas’ white-hot real estate market.

Then, as we now know, the wheels fell off. The Great Recession, starting in late 2007, kicked out several legs from the Strip’s dinner table: unemployment rose and consumer confidence plummeted, many businesses curtailed their meetings on the Strip, and falling real estate values nationwide left many Americans with far less financial security than they’d had during the boom. Adding insult to injury, the Las Vegas real estate bubble burst completely, forcing the cancellation of one Strip condo project (St. Regis, at the Venetian), the conversion of the Cosmopolitan into an exclusively hotel project, and eventually leading MGM Resorts to write off its substantial inventory of CityCenter residences.

Both revenues and visitation to Las Vegas fell. The latter was particularly worrying, since the annual number of visitors had continued to rise—albeit slowly—during earlier slowdowns. But when nearly 1.7 million fewer visitors came to Las Vegas in 2008 than in 2007, the city suffered the first decline in annual visitation since 1982—previously, the most severe recessionary storm it had weathered.

This sharp downturn led to the most severe job-cutting in the Strip’s history. From fiscal 2008 to 2009, 15,784 jobs were lost, a nearly 14 percent reduction—more than twice the number shed in the aftermath of 9/11.

The massive layoffs weren’t a case of hitting the panic button too soon: many operators’ revenues were in free-fall. Despite the short-term boon to the bottom line, cutting staff is, ultimately, rarely a winning move in Las Vegas, since it can compromise the service standards needed to maintain star and diamond ratings and can lead to severe declines in customer satisfaction—the chief reason, after all, for hospitality providers to stay in business. But the high levels of debt, which many operators had assumed during the good years, drove up interest and other expenses to the point where they forced a choice between default and de-staffing.

Still, all through the trough, plenty of analysts predicted that the worst was behind the Strip, that happy days were just around the corner. Indeed, there was a false dawn of sorts in 2009 and 2010, when the “baccarat recovery” led to a few months of positive year-on-year increases fueled exclusively by record win at the high end, while slot win lagged further and further behind. The 27 percent and 22 percent gains in baccarat win in those years, respectively, was not simply not sustainable; while lucrative, the market for American baccarat is fundamentally finite. So, when the 2011 gain for baccarat was just over 6 percent, few were really surprised.

It was clear that any real rebound in Las Vegas would have to be driven by a broader-based increase in gambling across the board—not just baccarat, but middle-market table games and slots as well. That didn’t happen in 2009, 2010 or for much of 2011. But it’s happening now.

That’s why it was good news when, in September, the slot handle on the Strip began to rise again. The overall amount of money played through slot machines, slot handle is a measure of how much people are playing. Handle had fallen steadily since the start of the recession, and most gains in revenue came because of higher hold percentage, not more money being played.

Yet in September, the Strip’s slot handle posted a year-on-year gain, and it has continued to do so since then. That may be the best sign of a rebound. Gains in table play, too, have spread beyond baccarat, giving credence to the notion of a broader-based turnaround.

Visitation is also coming back, slowly. We don’t have the dramatic post-recession bounce of 2004; instead, there’s been a more gradual return to pre-recession levels. In 2007, 39.2 million people came to Las Vegas; at the depth of the trough in 2009, that total fell to 36.4 million. Nearly a million people more visited in 2010, and in 2011 the total climbed back up to 38.9 million visitors. While it seems a sure bet that total visitation to Las Vegas can break the 40 million mark in 2012, no one’s shooting much higher than that. We won’t see the same kind of explosive growth that followed earlier downturns.

Too Much, Too Soon?

The big news, though, is that no one really wants to. In 2012, most operators seem content with slowly increasing their occupancy and room rates without adding much capacity. It’s a far cry from 2004, when too much, it was felt, could never be enough, or 1994, when new supply led to a 20 percent jump in gaming revenues, seemingly overnight.

Paradoxically, the relatively slow rebound might be good news, in the long-term, for Las Vegas. The massive debt currently burdening some of the biggest operators will act as a restrictor plate, preventing them from moving ahead full-throttle. We will not have another CityCenter, or much significant addition to the Strip’s supply, for some time.

This will give operators time to reinvest in their properties, making incremental improvements that will keep them competitive. No one will be in a rush to build more rooms, giving everyone time to recover. Then, if visitation numbers and occupancy rates continue to rise, someone will again be willing to loan money to build a new casino (or restart stalled projects). But in the meantime, the rest of the Strip should be in much better shape to face the new competition.

Indeed, there are signs that post-recession Las Vegas is going to be strikingly different from the future that many foresaw in 2006. For one, the Fontainebleau’s unfinished bulk is as concrete a warning as can be imagined against hubris. Even when dirt starts moving at the Echelon across the street, as long as the Fontainebleau remains a part of the skyline, it will be hard for Strip casino executives to get too far ahead of themselves. “Restraint” has never been part of the Las Vegas lexicon, but it’s going to be, for the foreseeable future.

And there’s a lot to be said for thinking modestly. At least that’s what Caesars Entertainment is banking on. Having assembled, through a series of transactions, seven contiguous center-Strip resorts when the Strip’s future looked its brightest, the company was faced with a dilemma: suddenly sitting on enough land to build an expansion of rooms that would make CityCenter look like a room renovation, it no longer had the capital to build anything substantial—nor was there demand for any new rooms.

With the possibility of an arena or stadium eventually materializing to the east of the Flamingo, the company engineered a sensible “expansion” program that’s more about depth than breadth—Project Linq. Linq will consist of three elements: the addition of retail and food and beverage outlets—not upscale but not fried Twinkies, either—between the Flamingo and Imperial Palace; the wholesale renovation and rebranding of Imperial Palace; and a 550-foot observation wheel that will anchor the new retail district and, should it be built, the arena.

If current trends continue, Caesars’ rollout of Linq will be one of the canniest strategic decisions on the Strip in recent years. More people are coming to Las Vegas, but they’re gambling less and spending less; adding mid-wallet food and beverage outlets might be the best way to capture a greater share of the money visitors are spending, and tapping into more wallets without adding beds—prohibitively expensive in today’s market—is a good move for a post-recession Vegas where there will be growth, but it will be a steadier increase than the city has historically seen after economic downturns.

CityCenter was the future that smart operators saw for Las Vegas in 2004; Linq is the future that they see in 2012. In 2004, it made little sense to argue that CityCenter could do anything but succeed; today, it’s difficult to see how Linq can miss, short of a major disruption in travel to Las Vegas that sends visitation plummeting once again. And should things improve more than most forecasts indicate, it’s always possible to raise the price points at Linq by a few dollars. But those are the problems which, right now, it’s very difficult to imagine Las Vegas having.

So while the Strip is in the midst of a rebound, it’s not going to be a return to the good old days of unlimited growth on the other side. With more muted prospects, the Strip is going to evolve in ways that can, right now, only be imagined. And that is what makes the gaming business, at the end of the day, just as unpredictable as any of the games on the casino floor.