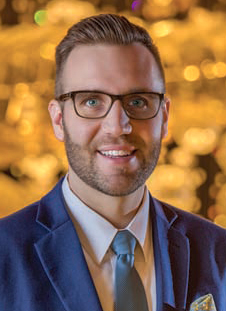 When Jordan Seager learned Mandarin as a missionary in Taiwan, he had no idea that knowledge would help land him an executive position at the Lucky Dragon Hotel & Casino, Las Vegas’ first Asian-centric casino resort.

“Without being able to speak Chinese, I would probably be teaching business at a high school here in Las Vegas and coaching volleyball. So yes, the language has been a big factor in my career,” Seager says.

He believes the two years he spent as a missionary also propelled his career, beyond learning the language. “Though they might seem like polar opposites, without my time in Taiwan I know I wouldn’t be anywhere close to where I am today,” he says. “My mission taught me how to work hard. Likewise, I believe my background is unique.”

Seager’s entry into the casino industry started as a fluke. He just returned home from Taiwan and took an internship at Station Casinos with another missionary.

“I knew nothing about the industry, and if I am being honest, I didn’t even know what position I was applying for.”

Still in college at the time, Seager joined Station as an analyst, a position he held for three years.

“It was the perfect role for me to begin in the industry, because I learned the business and financial side first,” he says.

Overall, Seager worked at 11 positions in nine years with Station Casinos in all facets of the business—including as an Asian host—which helped lead to his dream role as vice president of marketing for Lucky Dragon last May.

At Lucky Dragon, Seager spends half his week learning the good and bad about what is going on in the business. “I speak with team members on the front line who know what is happening better than anyone else. I meet with management, vendors, partners and guests to learn how to improve every aspect of our business.”

The other half of his time is spent analyzing the business, the financials, the deals, the database and such.

“I meet with my team to create new ways to grow profits while improving guest satisfaction. The last half (yes, I know that’s three halves) is what my wife, Brittany, calls ‘my second job,’ which is the time I spend on the phone while I am away from the property.”

Like many casino executives, the father of three has his share of influencers. But for Seager, his dad, Brian, has been his biggest mentor. “If you spoke to anyone that knows him, he is honestly the best guy in the world. I talk to him almost daily about every topic in the world, and I love him first as a father and second as my guide to becoming a better man, husband, father, leader and friend.”

Seager’s advice to those entering the business: “Find what you like and what you are better at than most people, and work your tail off doing that. And learn Chinese.”