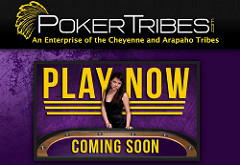 The Iowa Tribe, based in Perkins, Oklahoma, once again delayed the launch of its international, real-money gaming website, PokerTribe.com, because the National Indian Gaming Commission is investigating Universal Entertainment Group, developers of the tribe’s previous, unsuccessful deal to launch the similarly named PokerTribes.com with the Cheyenne and Arapaho tribes, based in Concho.

In 2012, the tribes paid Universal Entertainment Group of Miami $9.5 million to develop PokerTribes.com but the website never launched, and the project became involved in lawsuits with the U.S. Department of the Interior. Cheyenne and Arapaho Tribal Legislature Speaker Reggie Wassana said the NIGC recently requested additional information from the tribes about the failed PokerTribes.com arrangement. “A lot of money was paid and nothing was ever received. Nothing became of it. It was $9.4 million for a website basically. There was no realization of profits and no actual working internet gaming,” Wassana said.

Cheyenne and Arapaho Tribal Governor Eddie Hamilton added, “I remain committed to carrying out the directive of the tribal council to bring to justice, hopefully with the support of federal authorities, everyone who played a role in the PokerTribes scheme to take advantage of the tribes.”

Entrepreneur Fred Khalilian, a consultant to Universal Entertainment Group and PokerTribes.com, said he has spoken with NIGC officials and feels no action will be taken against the company. He noted in 2014 Universal Entertainment Group was investigated by the FBI regarding the Cheyenne and Arapaho deal and nothing illegal was discovered. “The FBI went through all of our financials dollar by dollar. We did nothing wrong,” Khalilian said.

The Iowa Tribe now has a $10 million deal with Universal for a majority stake in the company. The tribe announced it would launch PokerTribe.com with Universal last year after an arbitrator ruled that the venture did not violate federal or state laws and is allowed under the tribe’s gaming compact with the state.