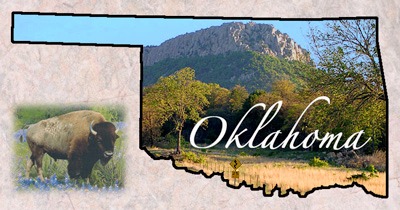 It is justice that the only significant U.S. growth market for American Indian casinos is Oklahoma, which before achieving statehood in 1907 was a territory set aside for the torturous, forced removal of dozens of indigenous nations.

The Chickasaw, Cherokee, Creek and Choctaw are among the state’s 39 federally recognized tribes, many of which were herded in the infamous Trail of Tears to the Sooner State from their ancestral homelands.

Today, 33 Oklahoma tribes own 115 gambling facilities ranging from upscale resorts to travel plazas, far more operations than any of the 27 other states with Indian casinos.

Oklahoma gambling in 2012 generated more than $3.7 billion, second only to California, where 60 casinos won $6.9 billion, according to economist Alan Meister, author of the annual Indian Gaming Industry Report, and other sources.

While the Indian casino market nationwide has plateaued—generating only 2 percent growth in 2012—Oklahoma has continued to thrive, its win climbing 5.8 percent to 7 percent over the previous year.

“We grew more than anybody in Indian Country,” says Sheila Morago, executive director of the Oklahoma Indian Gaming Association (OIGA).

Oklahoma has, in fact, become a mecca of Indian gaming, drawing players from throughout an eight-state region.

“Oklahoma is an amazing case scenario. It’s so unique,” says Matthew Robinson, founder of hospitality consulting firm Klas Robinson. “There’s been bombastic growth. And it looks like it is going to continue for some time.”

The profitability of Oklahoma’s casinos began with a handful of bingo operations in the 1980s and has never taken a backward swing, not even during the nationwide recession following the economic collapse of 2008.

“We have never, ever taken a dip,” Morago says. “The revenues have always gone up.”

Industry analysts predict the upward trend will go on for several years.

Much of the optimism is based on the fact Oklahoma is strategically located, drawing customers from Kansas, Missouri, Arkansas and a particularly lucrative Texas, surrounding states with few, if any, casinos.

There is scant evidence the statewide market is becoming saturated. But it is maturing, with tribes expanding casino operations with hotels, spas, entertainment facilities and other non-gambling amenities. Some 25 Oklahoma tribal gambling facilities were newly opened, expanded or renovated in the past two years. Other projects are on the drawing board.

Perhaps most important to their future prosperity, Oklahoma tribes enjoy political leverage with state officials, largely due to their pioneering development of Class II, bingo-style slot machines that under federal law do not require tribal-state gambling agreements, or compacts.

“Having a good Class II product can be very valuable in dealing with the state,” OIGA lobbyist John Tahsuda says.

Saturation? Not So Much

Slot machine and table game inventory is rising at a percentage roughly equal to the increase in revenue, but Morago says much of the industry’s growth is driven by new amenities.

“A lot of the bigger casinos are doing hotels and spas, restaurants and entertainment facilities.” Morago says. “It’s not just about the gaming anymore. You’re looking at a maturing market.

Much of the evolution from stand-alone casinos to destination resorts is taking place in larger cities such as Tulsa and Oklahoma City, Robinson says, and along the state borders.

Expansion projects include hotel towers at the Chickasaw Nation’s WinStar Casino near Thackery and the Comanche Red River Casino near Devol, both on the Texas border.

The Wyandotte Nation Casino in Wyandotte, near the Arkansas and Missouri borders, is doubling the size of its gaming floor. Hard Rock Hotel & Casino in Tulsa, operated by the Cherokee Nation, recently built a new hotel tower and several themed restaurants.

Market saturation will eventually impact the smaller, rural casinos catering to local residents. “There are a lot of opportunities for growth. But things are plateauing a bit,” Tulsa attorney Michael McBride says. “It’s becoming more competitive.”

There may not be a significant increase in the number of new gambling facilities, Robinson says, although there are several traffic plazas, or “gasinos,” in the planning stages.

The evolution of casinos into destination resorts provides Oklahoma security in the event surrounding states launch or expand gambling industries. This is particularly true with Texas and the lucrative Dallas/Fort Worth metropolis, which extends to the Oklahoma border.

“That’s the fastest-growing area in the country right now,” Oklahoma City University economist Kyle Dean says. “Our tribes are in an excellent position to take advantage of that.”

Gambling legislation has annually been introduced to the Texas legislature but has failed to make it to the governor’s desk.

“If somebody would have told me 10 years ago that Texas would still be on the sidelines, I would have guessed differently,” says a Tulsa gambling consultant who requested anonymity. “I would have thought something would have happened by now.”

Class II And The Compact Wars

Oklahoma’s gaming market is unique in that it remains, along with Alabama and Florida, an enclave of Class II, bingo-style slot machines. Of the tribes’ 2012 inventory of 68,134 machines, 28,430 were Class II devices, according to Meister’s report.

For some 20 years Oklahoma tribes operated Class II machines in defiance of state officials who refused to negotiate a Class III compact.

Native governments lost several lawsuits on machine criteria before the legal tide turned in 1999 and the DOJ/NIGC failed in a series of court cases alleging that games such as Megamania, Lucky Tab and Magical Irish were facsimiles of Class III, casino-style machines.

“If we didn’t keep beating that drum we wouldn’t have the level of Class II gaming that we have today,” says Burris, a consultant and interim gambling commissioner with the Viejas Band of Kumeyaay Indians in Southern California.

Oklahoma’s Class II inventory had reached 36,000 devices in 2004, when tribes and Governor Brad Henry finally agreed on a Class III compact later approved by the voters.

“When we got the compact, Class II gaming in Oklahoma was extremely advanced,” Burris says. “As competition grew intense, the technology improved. The market drove the technology.”

“Tribes in Oklahoma know Class II,” says a tribal consultant who requested anonymity. “They understand it. They fought the wars. They took the leadership role in establishing a viable Class II market. Tribes in Oklahoma have a far better understanding of Class II than any other state.”

“Class II is definitely the bedrock of Oklahoma gaming,” Morago says. “We want to make sure it continues to be a healthy industry.”

“The turnaround with the NIGC is amazing,” Tahsuda says. “Tribes went from fighting a commission that was seeking regulations that would cripple the Oklahoma industry to a commission very supportive of a vibrant Class II gambling industry.”

Although the DOJ eventually blocked NIGC efforts to implement the “one-touch” reinterpretation, tribal officials doubt the federal government will attempt to halt use of the technology, which has been utilized by tribes in Oklahoma, Alabama, Florida and elsewhere for several years.

“I’ve seen no recent interest in that issue by the DOJ,” OIGA attorney Dean Luthey says. “The long-term inaction, in my view, is consistent with federal determination that the games currently being played… are, in fact, lawful.

“Neither the NIGC nor the DOJ can do anything because there is no requirement under IGRA for two touches to play the machines,” says consultant and former NIGC commissioner Norm DesRosiers. “They have no grounds to take enforcement action.

“Besides, the Obama administration doesn’t have the stomach to go after Native Americans right now.”

Although Oklahoma compacts do not expire until 2020 and include 15-year automatic renewal provisions, tribes are being pressured by budget-plagued state officials to renegotiate agreements that currently require revenue shares of 4 percent to 6 percent.

“There is always the possibility she could try to renegotiate compacts early,” attorney McBride says of Republican Governor Mary Fallin.

But there is little incentive for tribes to engage in talks.

“Tribes are generally happy with the compacts, which have allowed exclusivity and enabled the industry to grow,” McBride says.

“Nobody has any given indication that I know of to start renegotiations on a new compact,” Morago says. “Until it’s time, there’s no reason to go there.”

During the 20 years Oklahoma tribes utilized bingo-style machines before entering into compacted gambling, they nurtured a very loyal customer base for Class II machines, a niche that has grown as the games evolved.

Many tribal operators are swapping out Class III devices for Class II machines, which are operated outside the tribal-state compacts and do not require a fee to the state. Meister notes in his report that the 2012 inventory of Class II devices rose 11.1 percent to 28,430 machines. Class III inventory fell 4.6 percent in 2011 before rebounding 4.5 percent in 2012 to 39,704 machines.

“I don’t know that there is a big rush toward Class II, but it is certainly growing a little bit,” says Mick Roemer, senior vice president of sales for Multimedia Games.

The growth in the Class II industry is even stronger in other parts of the nation, including California, where compacts require not only a fee, but a cap on the number of machines.

“It continues to be a viable alternative to Class III and a way for tribes to protect their sovereignty,” Roemer says, particularly when pressured by state compact demands.

Tension In The Governor’s Office

Relations between the tribes and Fallin have been anything but smooth since she took office in 2010.

“There’s been a lot of tension,” McBride says.

The governor angered tribes when she tried to extract a 20 percent tax from a Cheyenne-Arapahoe plan to launch an internet gaming website to target overseas gamblers. The revenue share was rejected by the U.S. Department of the Interior and the project was killed.

There also remain strained feelings over a tobacco sales tax settlement reached earlier this year. Tribes conceded much to the state, largely because tobacco sales for many tribes no longer constitute a significant portion of their government revenues.

Fallin is seeking re-election and will be termed out in 2018, two years before compacts expire. Hopes of trying to get a new agreement out of tribes that would be more lucrative to the state appear to be an uphill battle.

“I suspect the state feels emboldened by the results of the tobacco negotiations,” Tahsuda says. “But that wasn’t worth an all-out war.

“It’s going to be a different deal if she tries to renegotiate a gambling compact. She doesn’t have the legal leverage. And the incentive for the tribes is so much higher.”

“The precedence set with the tobacco compacts was pretty disturbing,” a tribal consultant says.  “But if she tries to renegotiate tribal compacts it will be a real cat-fight, and Class II will be the line in the sand.”

Tribal leaders did not approve of Fallin’s abolishing the Oklahoma Indian Affairs Commission, replacing the office with a single tribal liaison. And her daughter Christina, a rock singer, stirred tribal sensibilities when she donned a Native American headdress for an Instagram photo.

Fallin apologized for her child’s insensitivity. She also pledged support for a Native American museum project long in the planning stages.

But a good number of non-Indian Oklahoma citizens—most politically conservative and many fundamentally religious—lack an understanding, if not appreciation, of their indigenous neighbors and the concept of domestic sovereign governments.

There is uneasiness over water issues, particularly with the state’s farming communities. Because most tribes were relocated to Oklahoma, the issue for Indian leadership is not preservation of ancestral lands, but protection of reservation lands.

Tribes represent the state’s third largest employer with some 54,000 people on the payroll.

“The tribes in Oklahoma are extremely significant,” Dean says. “We’re still a fairly rural state. And one advantage with the tribes is they provide employment in the rural areas.”

Tribes are also diversifying their business portfolios beyond casinos, branching out into health care, banking, retail development and investments intended to ensure a sustainable source of funding for governmental services should the gambling market diminish.

“The tribes would like to greatly reduce their reliance on gaming,” Dean says. “That way if Texas does get gambling, it may hurt their casino operations, but it wouldn’t ruin their economies.”