Tribal gaming in Oklahoma is enjoying a growth spurt. Could growing pains follow? The Sooner State is keeping a close eye on possible new competition in state, out of state and online. 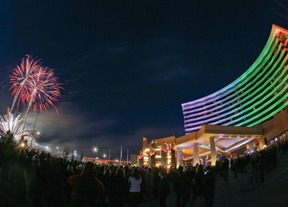 Oklahoma gaming is on the upswing. The proof is in the numbers.

• From 2010 to 2011, revenues from the state’s 116 gaming halls rose by almost 8 percent, far surpassing the 3 percent increase in Indian gaming nationwide.

• Oklahoma now ranks third in casino revenues in the U.S. (behind Nevada and California), and there is an estimated one slot machine for every 70 adults in the Sooner State.

• In 2006, two years after lawmakers compacted with the tribes to bring Class III games on board, the state pocketed more than $14 million in shared revenues. By 2012, that total had reached almost $124 million, a 770 percent increase.

As tribal leaders publicly hail the growth of their industry and expand operations accordingly, they are privately aware that the market is nearing full maturity, and may soon reach a point of saturation, decreased momentum and diminishing returns.

That change would accelerate if gaming expands beyond horse and dog tracks in neighboring Arkansas and Texas. And while a casino referendum in Arkansas was invalidated by the state Supreme Court last year, in a recent poll 64 percent of Texans said they have gambled in other states and would prefer to play closer to home. Some Lone Star lawmakers, frustrated by the loss of some $3 billion spent by Texans to gamble elsewhere, will continue to push a constitutional amendment to permit additional gaming.

“We owe the success of Oklahoma gaming to its illegality in surrounding states,” says attorney D. Michael McBride III, chairman of Indian Law & Gaming for Crowe & Dunlevy P.C. of Tulsa. “There are only a few tribes in Texas, and so far they have lost in their quest to engage in broader Class III gaming. But I believe that commercial non-Indian gaming will prevail ultimately in the legislature there, if not in five years, possibly within 10 years.”

In the late 1980s, Indian gaming in the United States was still limited to bingo parlors and old-fashioned paper games. But even then, the young industry was a primary and welcome source of revenue for the tribes. In 1988, 100 tribal gaming halls at reservations and rancherias across the country grossed $110 million. In October of that year, President Ronald Reagan signed the U.S. Indian Gaming Regulatory Act into law, and it kicked off a billion-dollar business boom. Since then, gaming has lifted many tribes from grinding poverty and transformed many into billion-dollar business conglomerates.

IGRA has been “the most successful economic development policy in the history of the U.S. for tribal people,” says McBride. Thanks to gaming, many Native Americans are no longer among the “bottom 1 percent” described by Forbes in a 2011 article on Indian economies.

But market maturity and potential new competition could slow their economic progress, along with a new player undreamed of even a dozen years ago: legal online gaming. In that case, even IGRA could prove an obstacle, because it demands that tribal gaming occur only on Indian lands. These “Reagan-era IGRA territorial restrictions” could thwart tribal internet gaming, with the exception of Class II linked games between reservations, says McBride.

As digital games proliferate, tribes may find themselves at a disadvantage geographically and technologically as well as legally. In the 19th and 20th centuries, defeated Indian nations were forced onto reservations by the United States government.

“Through fate, history and mistreatment, many of then have pretty bad locations,” says McBride. If internet gaming becomes widespread, rural operations could suffer from inaccessibility as well as the lack of technical infrastructure and bandwidth.

The convenience factor also would play in.

“Young people are very comfortable with playing on their iPhones and engaging in little tablet devices in the palms of their hands,” says McBride. “If they have the legal right to game in their pajamas in their bedrooms instead of driving three hours to a rural Indian casino, they would probably pick the comfy pajamas.”

“We’ve been closely following the possibility of online gaming becoming a reality; all casinos should be preparing for it,” Fulton observes. “But online gaming is a solitary event. When you visit us at Hard Rock, you can enjoy the games, a nice dinner and a concert with your friends. Our current plan is to continue offering the best entertainment experience for our guests.”

McBride agrees that smart operators should be able to turn online games to their advantage. Even small rural operations, like those with 60 slot machines tucked away in travel plazas, could benefit from internet gaming if “borders don’t matter anymore.”

“I’m an optimistic guy; I think it can be complementary to bricks-and-mortar casinos,” he says. “Well-run operations already have good relationships with their players, and you can continue to engage players on a broader level through the use of i-gaming.”

Gaming tribes in Oklahoma continue to prosper, yet the state government is realizing less money on the deal. In 2011, the state received about $121.7 million, $1 million less than the year before. While that figure soared to almost $127.8 million in 2012, officials attributed the rise to more total games, not more revenue overall.

The differential is explained in Casino City’s 2013 Indian Gaming Industry Report, compiled by economist Alan Meister and published by Nathan & Associates based in Arlington, Virginia.

Meister reports that since 2009, Oklahoma tribes have been adding Class II games, which are not subject to compact fees, and decreasing the percentage of Class III games and non-house-banked table games like poker, which require revenue sharing. That followed a three-year surge in Class III games, from just 10 percent in 2005 to 66 percent in 2008. That growth came after the National Indian Gaming Commission tried to impose limits on Class II games that would have made them less similar to Vegas-style games and thus less appealing to players. When the NIGC reversed its position, Class II rebounded. Since then, the percentage of Class III games has dropped to about 60 percent of all games in Oklahoma.

Some tribes contend that the increase in Class II is not a way to keep more money in tribal economies. Sheila Morago, executive director of the Oklahoma Indian Gaming Association, says the rise in Class II games is a more a matter of supply and demand.

“You have to remember, this is the hub of Class II,” Morago says. “This is where Class II grew up, and the market dictates a lot of Class II play. People here like those machines. In fact, when tribes first put Class III machines on the floor, people were looking for their Class II machines. It’s all about what the player likes.”

Of course, she adds, “The tribe does not share revenue with the state on Class II revenues, so that means more money for them to increase their economic development opportunities.”

“Class II is still very, very popular,” agrees Pat Crofts, CEO of the River Spirit Casino, one of three tribal gaming halls in Tulsa. “People in Oklahoma grew up on Class II games. That’s what they like, that’s what they’re comfortable with. And it’s the customer who decides what you have on your floor.”

McBride points out that Class II games “remain extremely important for leverage purposes, in terms of negotiating compacts as well as populating a gaming floor and maximizing profits.

“Certainly Class III is very important—it’s exciting, and it’s the residual category of gaming that (encompasses) everything beyond Class I and Class II, which are pretty narrowly defined categories,” he says. “But again, when the states are requiring onerous terms to reach a bargain with tribes for Class III gaming, it makes Class II all the more important as a fallback position.”

For now, prudent growth—primarily upgrades and additions to existing casinos—still makes sense in Oklahoma. Last year, the Chickasaw added 54,000 square feet of gaming space and a new hotel tower at WinStar, one of the largest casinos on the planet on the Oklahoma-Texas border. On the opposite end of the scale, the tribe also opened its 18th property, the $20 million Salt Creek Casino near tiny Pocasset, Oklahoma (population 158).

“We would not be doing a project of this size if it was just going to make a bigger box; that would just ratchet up the competition among the three casinos in this area. We would be cutting up the same pie in more pieces and spending more marketing dollars doing it.”

The new Margaritaville, he says, “is definitely going to grow the market.” With a new hotel, a global brand and a location near major highways and an international airport, the property will be positioned to move beyond a locals patronage (up to 90 percent of customers come from within a 75-mile radius) to attract a broader clientele, and the money-making Margaritaville name will go head to head with another major brand: the Hard Rock, formerly the Cherokee Casino Resort.

To its benefit, the company chose to grow during the recession, says Fulton, starting with the transition of its flagship property to the Hard Rock. And it’s still growing. “In the last few years, we’ve added 350 hotel rooms, built a 2,700-seat music venue, and expanded the gaming floor,” Fulton says. The Cherokees have also built a bigger property with a hotel at West Siloam Springs, opened a temporary casino and then built a permanent casino in Ramona, and built a new casino in Fort Gibson.

“It’s a competitive market, so we’re always looking for ways to better differentiate our offerings, whether it’s through improvements or adding more amenities,” Fulton says. “There’s still room for growth.”

But the market is not unlimited, and some tribes are quietly branching out into other enterprises, not only to prepare for the possible contraction of casino revenues, but also because it’s good business. No one in Indian Country—in Oklahoma or elsewhere—wants tribal gaming to become what has been termed the “new buffalo:” a single, seemingly boundless source of economic supply that ultimately proves impermanent.

“We have seen tremendous double-digit growth for many, many years,” says McBride. “But I think we’re going to see the growth narrow and be smaller if not flat or even diminished in the future, and tribal governments need to find more diversified ways to serve their people and fund governmental programs.”

Colorado’s Ute tribe, for example, “is very successful in terms of natural resource development—oil, shale, natural gas energy… They developed one of the largest portfolios of investments as a result of their success (in gaming),” says McBride. “Others developed manufacturing facilities, maximized 8(a) government contracts, got into high-tech ventures—they’re using gaming as an economic engine to help fuel other business activity.”

“There is absolutely a lot of conversation going on about it,” says Crofts. “The Chickasaw are hedging their bets a little bit by buying one or two racetracks in Texas. The Creek Nation has purchased shopping centers. Several of the larger tribes are looking for other opportunities around the country. They’re into all different kinds of businesses, but it’s been enabled by gaming, which has given them the opportunity to spread their wings and diversify.”